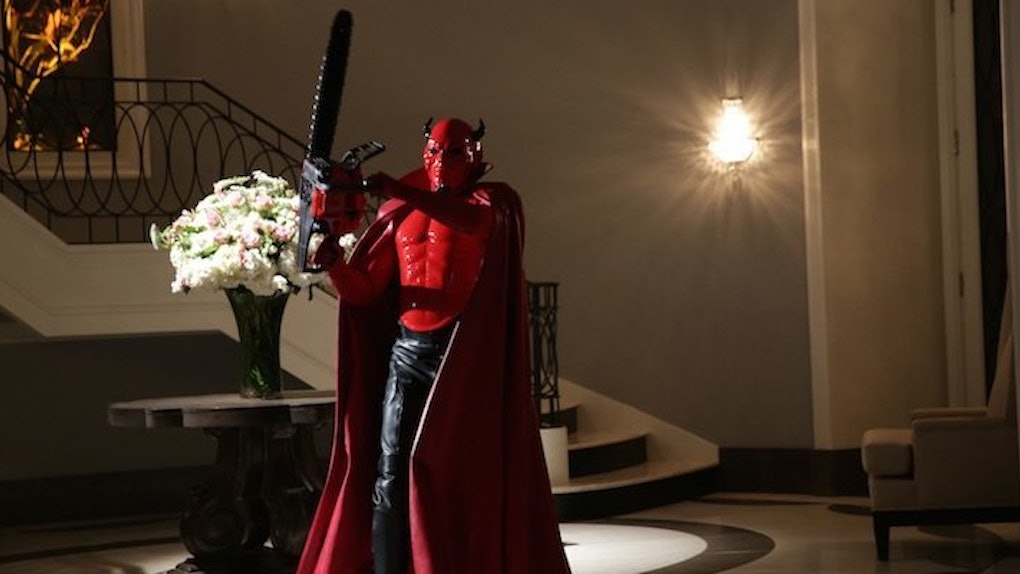 Many of us have been watching (and loving) Fox's "Scream Queens," even if our enjoyment is often interrupted by our debates about who the hell is killing everyone.

Lately, fan sites and discussion boards have been erupting with theories and observations, as we all try to work together to crack the case.

Even the cast doesn't know who the killer is, and the Red Devil himself is always played by a stuntman.

As a film and television fanatic, allow me to throw my hypothesis into the mix: There is more than one Red Devil, and we met the killers in the pilot.

So, I believe the Red Devil is at least three people, but I also think there are even more characters "involved."

I'm sure it's not Chanel O. because that would be too obvious.

I suspect if Grace isn't "the bathtub baby" like the show's writers are leading us to believe, it's Chanel.

Perhaps the Red Devils are working to help her (i.e. putting acid in the tanning spray that injured or possibly killed the previous Kappa Kappa Tau president, kidnapping Zayday right before the voting for a new president, etc).

I'm also sure it's not Dean Cathy Munsch because switching it up and making original scream queen Jamie Lee Curtis the killer would be predictable and disappointing.

So, without further ado, here are my suspects:

She's been presented to us as the sole survivor type, but we have to assume we're being tricked at every turn, right?

The clues: Ryan Murphy is notorious for giving away clues in his opening credits. In them, Grace is shown engulfed in flames.

Could this be a reference to her death?

Could this be just part of the backstory of the fire that supposedly killed her mother and destroyed all records of her existence?

Or, could this signify "hell fire," aka "Devil?"

Maybe Grace has figured out something about her mother's time at college that she's keeping to herself (i.e. possibly Sophia is her mom, and Grace is the bathtub baby), and she's seeking revenge.

This would also explain why Mandy was killed.

We pretty much know Boone is involved somehow, since he was approached by the Red Devil and faked his death.

The clues: When the (ridiculous) standoff with the fraternity happened, Chad was knocked out, but not killed.

We can assume the Devil was Boone, and he didn't want to kill Chad. But, he needed to make it seem like he tried to.

I'm not sure what his motive would be, other than maybe hating Chanel for being with Chad.

Gigi is obviously involved somehow. I mean, it's been revealed she's (probably) the wailing woman.

The clues: She spoke with the Red Devil, telling him things went way too far, and they needed "to get rid of him."

Could she be talking about Wes? Is she with him as part of a plan?

Or, is she talking about the other Red Devil and the altercation she had with him or her?

Does she want to eliminate someone from the group?

If Gigi is the wailing woman, she may have been the one to care for "the bathtub baby."

She was in Kappa at some point and seems to be stuck in the 90s. (Note her wardrobe.)

Could she be Amy from the sorority house?

Gigi also seemed to be surprised Wes didn't recognize her when they met, which raises a lot of questions about his relation to Kappa house, since his wife was a pledge.

I feel like Chanel has to be involved. She's actually also another "bathtub baby" suspect.

The clues: Both of Chanel's boyfriends have been killed, and one was even killed right beside her. But, she was spared.

She seems the most likely to snap, and she's definitely the most questionable of all the Chanels, since she hates Chanel O. so much.

We don't know much about her backstory. Abigail Breslin was a big name for the show to land, and it hasn't done much with her character so far.

There are only two reasons I suspect her.

I mean, her mention of Charles Mason being her father seems odd at best. But, it's not really "suspicious."

The Clues: The first clue is that pair of earmuffs.

I don't buy her explanation that her ex-boyfriend was obsessed with her ears and wanted to cut them off.

I think they could be a communication device she uses for her cohorts.

The second clue is, when Sam was killed, she asked the killer to take off the mask.

She then responded that she "knew it."

Sam wasn't close with many people, so I have a suspicion it could have been her ally, Chanel #3.

I know we've never "seen" Chanel #4, but we have technically been introduced to her character.

The clues: She supposedly went home against Chanel's orders and died.

But, there wasn't any mention of attending the funeral afterward.

Is it possible Chanel #4 faked her own death and is back for revenge?

I mean, if she was ill and Chanel forbade her to leave, it's pretty clear Chanel was just as horrible to her as she is to everyone else.

It seems like she possibly died, but we don't know for sure.

The clues: She suspects Chanel is responsible for the acid in her tanning spray, and she could be seeking revenge.

Although, it seems more likely she joined in with the Red Devil later.

If the Red Devil isn't the one who sprayed her with acid, which is possible, my thought is maybe Chanel did it.

Then, the Red Devil offered Melanie a way to get revenge.

Wes is a really weird character, and we know he's divorced.

Grace's dad somehow managed to get her into college without having any record of her birth, and he then hooked himself up with a job teaching at said college.

We know his deceased wife was a Kappa, but he didn't want Grace joining the sorority.

He enjoys playlists, and he has some sort of relationship happening with Gigi.

The clues: His wife was a Kappa. Was she Sophia?

Is Grace the "bathtub baby?"

Is he seeking revenge?

If Grace was the Kappa baby and Gigi was the wailing woman, how did he get Grace, and why?

If Grace isn't the bathtub baby, is he still the father of the baby? Does he know?

Who is the baby?

Did he make the playlist with "Waterfalls" on it that played at the party in 1995?

What's up with his horror film fascination?

There seems to be something linking him to the Red Devil situation, but what is it?

Did he attack Gigi in the Kappa house? Is his relationship with her just a cover-up?

No one seems to suspect Denise, but I feel like she has more purpose in the story than just being the world's worst security guard.

There must be an explanation for her friend's murder.

The clues: None of the murders seem random, so unless the Red Devil mistook Denise's friend for Denise and killed her for that reason, Denise must be involved.

Maybe the murder of her friend was to keep people off her track.

Denise wanted to pledge Kappa, but she was refused.

Maybe she's still spiteful about it and decided to go on a killing spree.

Getting the security job would make sense as a way to get close and appear innocent.

This is true only if we're assuming Amy is an independent character, not one and the same as Gigi.

The clues: Amy would be pretty messed up about what happened in the Kappa house in 1995.

She could definitely be seeking revenge.

Maybe she followed Pete and Grace, which allowed her to find and kill Mandy.

Or, she could be out to protect the baby, who is possibly one of the Chanels, Chanel O. or Grace.

I don't suspect Jennifer to be one of the actual killers, but I think she may be involved.

The clues: Now, I said I don't see the dean being a killer, but she could be involved.

Hell, she could be the mastermind.

Maybe she brought Jennifer into the house to assist her.

Jennifer is a pretty forgotten character, but she was way too casual when she said, "It's just a matter of time before one of us or all of us ends up dead."

I can't even begin to speculate about who is working with who, assuming I'm right about any of these theories.

Only time will tell, and as more people disappear, things will become clearer.

But, we won't know for sure until the finale. I can hardly wait.