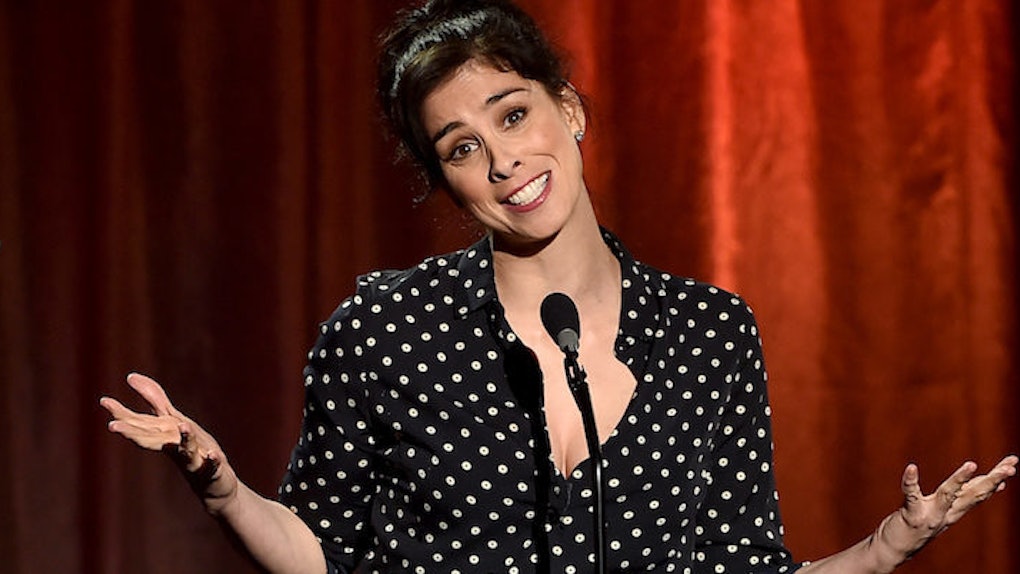 At a surprise Iggy Pop show at the Teragram Ballroom in Los Angeles Wednesday night, Sarah Silverman showed up as the opening act to the surprise of everyone in the audience.

The show itself was objectively the most epic concert of all time, and Silverman's performance only added to the majestic quality of the night.

After watching her deliver a perfect set from just a few feet away, I can now die having lived a full life.

There were a couple idiots, however, who didn't seem to realize greatness was standing before them. Unsurprisingly, Sarah Silverman knew just how to shut them down.

She started off with this joke about talking to her beloved dog until he died at the age of 19. Near the tail end (cringeworthy pun intended), she said,

I stopped talking to myself because there wasn't a dog in the room. But now I have a new dog, Mary. And she's three and... she's got so much energy, but she's dying... [comedic pause] In that, she's dying. She's gonna die.

At this, the room got a little quiet, probably because they were thinking of their own 3-year-old Chihuahua terrier mixes running through a field of daisies in doggy heaven.

Still, she went on, digging the dead puppy knife a little deeper, saying,

I mean, she'll die in the next ten years. She'll die in my lifetime, and I can't take it. My heart, it hurts too much.

And that's when one young woman called out from the audience, "Get a parrot!"

Sarah Silverman immediately replied, "Shut up," causing the audience to erupt with laughter. "Aw, I wanna give you that," she said, "But not during a joke."

Lucky for us, she didn't stop there. Silverman ripped this girl a new one with a totally improvised rant that was one of the most hilarious parts of the entire night. It went like this:

'Get a parrot' is so perfect because that tells me so much about you. You walk around with a parrot on your shoulder saying, 'I need this attention,' just like yelling out, 'Get a parrot,' in the middle of a WELL-TIMED PIECE. But you deserve love and you're beautiful and you didn't mean it! You were trying to help!

She groans and gets back to joking about putting Mary to sleep early since six or seven years is just a blip in time anyway.

Then, in the middle of the next joke about an Ethiopian orphanage director with hooks for hands, this girl interrupts her AGAIN by chatting with her boyfriend. Like, are you f*cking kidding me?!

Silverman fires back with yet another hilarious retort, saying,

Talk during Iggy Pop. He loves that.

The rest of us in the audience couldn't even handle it at this point, when she said,

When I came out here I said you all deserved love. That may have been overstated.

Oh, Sarah, you give exactly zero f*cks, and that's what we love about you.