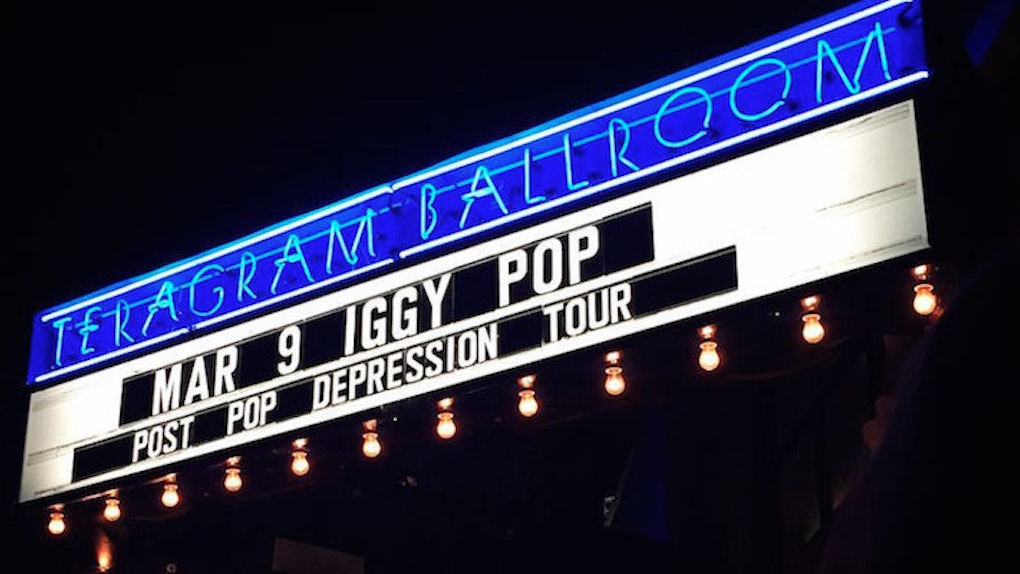 The gateway to my personal heaven.

Last night was the most spiritual experience of my life. I wasn't at church or kneeling in front of an altar; I was at a rock concert.

While I don't believe in some old white dude watching everything I do (creepy) or adhere to any organized religion's rules, I'm not as godless as you might think.

A self-admitted spiritual person who questions the basis of our existence, I still feel confident we're bonded by an energy we'll never definitively see or prove. I don't think people get separated into two categories after they die based on whether or not they got their heads dunked in water. I do think we, as humans, have purpose.

Based on my spiritual profile, you might assume I was a) born in California, or b) raised by heathens. And you'd be right on both counts. But here's why I think you should still hear me out: Rock concerts -- yes, rock concerts -- may be our only chance at salvation.

I've always suspected this theory to be true, but after going to Iggy Pop and Josh Homme's surprise show at the Teragram Ballroom in Downtown LA last night, I'm a firm believer in rock concerts saving us all.

In case you're not already aware, Iggy Pop is one of the last living rock legends. The 68-year-old started his career in the late 60's with proto-punk band The Stooges before launching a solo career under the guidance of David Bowie. To give you some perspective, he invented the stage dive.

This year, Iggy Pop joins up with Josh Homme (lead singer and badass from Queens of the Stone Age) to tour for what could likely be the greatest rock album of all time, Post Pop Depression.

It's as good a sign as any that rock music is making a big comeback, and I could not be more thrilled about it.

This album, in particular, strikes a nerve I think we all have, given the historic uncertainty of our times. Take "Sunday," for example, a song about feeling apathetic in a spiritually vacant consumer culture with the lyrics that are more truthful than any Bible verse,

But this isn't just a review of one band or even one concert I went to. This is about needing replenishment of the soul in a way that only music can provide.

Because anything can be a listicle if you try, let me lay it out in a few easy-to-digest bullet points.

All you need are ears to enjoy music. And at this volume, you don't even need that. You can feel the vibrations of the bass while the intensity of the performance reverberates through your entire body.

Crowded like sardines in an aging dance hall with all of our eyes on one thing only, we're a part of the same body while swimming singularly in our own headspace.

What's more, there are no exclusions, conditions, exceptions, catches or contracts. Write your own rules and exercise them on yourself as you please. All those interested need not apply; consider yourself already part of the club.

Watching a live performance reminds us of our own fragile temporality.

I'm talking about real music produced by real musicians playing real instruments in real time. It's a question of crowdsourcing communal experiences that are each one of a kind and, in effect, holding a mirror to our individual lives.

Both awful and divine, one moment slips to the next no matter how hard you try to hold on to it. The opportunity for failure is present in every strum of the guitar, beat of the drum and leap into a vocal melody.

When people take risks and make themselves vulnerable in front of a live audience, there exists a vitality you can't replicate.

Rock music is all about living in the moment, and you'll never be more present than you are at a rock concert. Its very nature demands it of you.

The list could go on and on. For instance, not a single war has been waged in the defense of rock and roll. Neither does the church of rock discriminate based on race, gender, sexuality or class. You go for the pure joy of it, stay for the transformative sounds and leave with a renewed sense of humanity's possibility.

At home, with your ears still ringing and blood thumping, you have the chance to reflect. That's when the experience comes full circle, brings it back home, reminds us of our place in the infinite life-and-death labyrinth. Standing three feet away from a living legend, his successor just two steps behind him, nothing could be more clear. It was awesome in the truest sense of the word.

So what are you waiting for? Put on some headphones, take a listen and go to as many live shows as you can. I cannot -- will not -- force you to convert, but I can promise you'll have a damn good time.