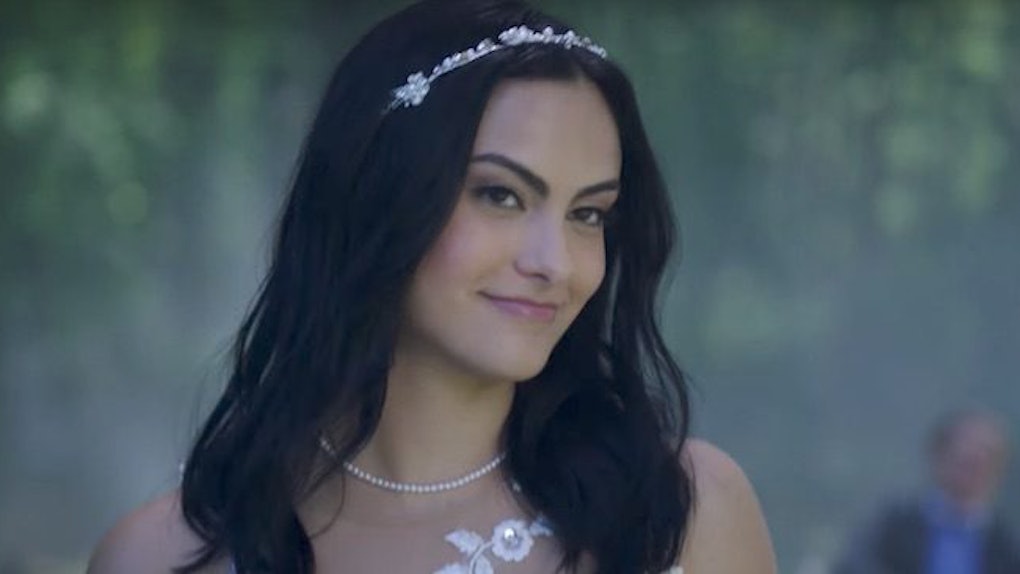 Despite the fact that there was barely even a wait at all, the wait for the next season of Riverdale is almost over. Believe it or not, the Archie comics-inspired, teen murder mystery is back this October, and the CW teased fans with a Riverdale Season 2 trailer on Wednesday. The season will premiere this fall, October 11, just in time for Halloween. This definitely seems like an appropriate time to release the season, because based on the teaser trailer, Season 2 is going to be really freakin' scary.

The opening shot of the trailer shows Betty, Jughead, Archie, and Veronica hanging out and having a good time at their favorite diner. Strawberry milkshakes are on the table, Jughead's wearing his stupid hat like the weirdo he is, and everyone is smiling. It's all very Archie comics — in fact, fans of the old comics will recognize the four teens are even wearing the exact clothes their characters always donned when they were just drawings on a page.

However, this veil of happiness quickly dissolves. The very next shot shows Archie (played by actor  K.J. Apa) on the ground, face contorted in fear, with a gun pointed straight at his head. So this is going to be a fun season! Next, we see a variety of disturbing shots. Fred Andrews is being rolled out on a hospital stretcher, presumably because he got shot by that burglar in the Season 1 finale. Then we hear Jughead in the voiceover saying, "What if robbery wasn't the motive? People hold grudges. Think of where we live."

We see Cheryl Blossom walking through the hospital, looking possibly the most glamorous any person in a hospital has looked, ever. Other things of note from the trailer: Archie and Veronica (played by actress Camila Mendes) getting hot and steamy in a shower scene, Archie carrying a gun, Jughead (played by actor Cole Sprouse) and Betty (played by actress Lili Reinhart) getting romantic in a kissing in the rain scene, Archie crying into a phone with a bloodied up hand, Veronica walking down an aisle in a white dress (excuse me, what?) while Mary Andrews smiles proudly and winks in the crowd.

And of course, this trailer gave fans their very first look at Hiram Lodge (played by actor Mark Consuelos), also known as Veronica Lodge's father. There he is, just sitting there pensively and formidably at a desk, with a bottle and half glass of red wine, and a very nice looking cheese plate. What is he thinking about?

Well, hopefully we'll find out all the answers soon enough. Personally, I'm just hoping this season will bring us lots and lots of Jughead and Betty goodness. In an interview with Elite Daily, actress Lili Reinhart perfectly summed up why her character's relationship with Cole Sprouse's character is so popular. Reinhart said,

It was surprising. I think people really were responding to the fact that these two characters, who were never put together [in the comics], are now having a love story. They're both polar opposites externally, but they're really not that different personality-wise: I think they're both romantic, they're both a little dark and tortured on the inside. And people like seeing those two outsiders come together in a way.

Ugh, yes, just give me more of that dark, tortured romance, please! If The CW can't give me a good tortured teen couple then what the heck am I even watching The CW for?