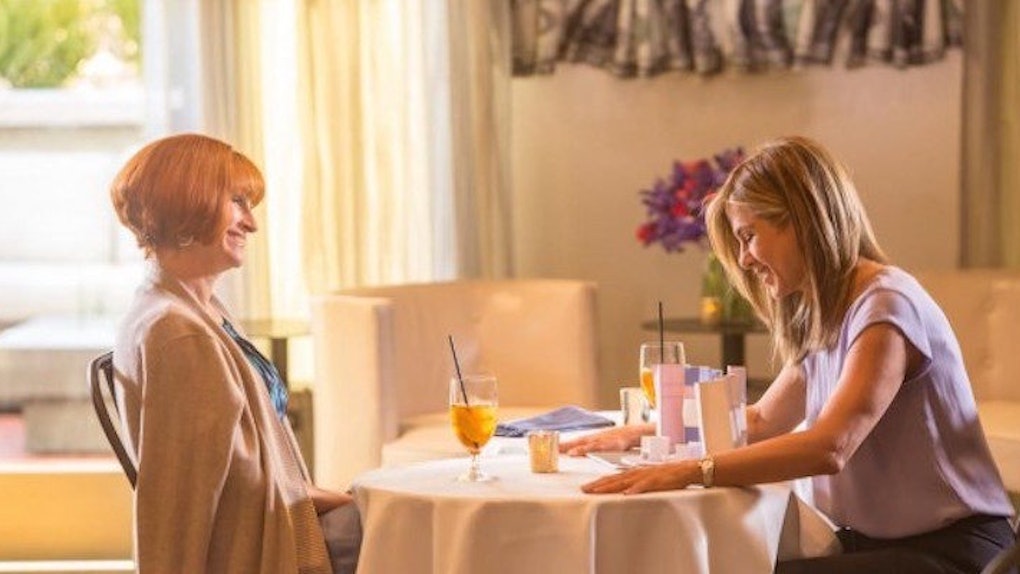 Like the glowing briefcase in “Pulp Fiction” or the final whispered words of “Lost in Translation,” the ill-fitting Anna Wintour wig worn by Julia Roberts in “Mother's Day” seems destined to enter the pantheon of great cinematic mysteries.

Did some earlier version of the script explain the wig's presence? Why does no character in the film point out how strange it looks? Did Roberts insist on wearing the wig — a leftover prop from one of her faux films in “Notting Hill” — as a Brando-esque bit of actorly mischief, or does it hold deeper significance?

We may never know the answers to these questions, but pondering them provides some welcome distraction while slogging through director Garry Marshall's third minor-holiday ensemble comedy, which somehow makes one long for the Hallmark-card half-competence of predecessors “Valentine's Day” and “New Year's Eve.”

Atrociously written, begrudgingly acted, haphazardly assembled and never more backward than when it thinks it's being progressive, “Mother's Day” should at least be able to count on Mother's Day traffic to boost its box office — or at least it could have, were it not opening 10 days prior.

From the release date to the costuming to the heavy-handed Sprouts supermarket product placement, almost nothing about “Mother's Day” makes much sense. It's true that no one ever sets out to make a bad film, but in certain extreme cases — the latter-day works of Adam Sandler, for example — the creeping suspicion that so few people involved in making the film actually cared whether it was any good can be equally demoralizing. That's certainly the case here.

After a brief voiceover from a never-seen character (Penny Marshall) about the daily struggles of motherhood, we're introduced to an unwieldy cast of upper-class moms in the Atlanta area, all of whom share some roughly sketched troubles that come to a head in the week before Mother's Day.

The only one who really scans as a harried matriarch is Sandy (Jennifer Aniston), a stressed single-mother of two whose squinty ex-husband (Timothy Olyphant) has just announced his marriage to an air-headed 20-something (Shay Mitchell).

Sandy commiserates with her constantly-exercising friend Jesse (Kate Hudson), who lives next door to her sister Gabi (Sarah Chalke). Both siblings have been keeping their children and spouses secret from their bigoted Texas parents — Jesse's husband, Russell (Aasif Mandvi), is Indian, while Gabi is married to a woman (Cameron Esposito).

Further off in the film's orbit, Jason Sudeikis takes a straight-man role as Bradley, a physical trainer facing his first Mother's Day without his dead wife (Jennifer Garner, glimpsed in home movies singing karaoke at a military base), and befuddled by his oldest daughter's sudden interest in boys and tampons.

On the conspicuously childless side of the coin — “Do you have any kids?” “No. Career,” goes a representative exchange — Roberts and her wig play a cheap-jewelry-hawking Home Shopping Network host, roughly as famous in the Atlanta area as Johnny Carson and Oprah combined.

Given the length of time required to simply introduce the cast, one can forgive Marshall and his team of screenwriters for falling back on easy, well-worn conflicts once the narrative wheels finally get moving. Most end predictably — a wedding, a reconciliation, a moment of clarity, a Digital Underground karaoke session — but a few go careening off the rails.

Most unwatchable is the plot strand involving Jesse and Gabi's hayseed parents, who pay their daughters a surprise visit. Riding around in an RV, clad head-to-toe in stars and stripes and using chicken wings as toothpicks, the two are such ghastly caricatures that the portrayal almost seems unfair toward racist homophobes.

Luckily, they're cured of their bone-deep bigotry thanks to an accidental Skype session with Russell's broadly-played Indian mum (Anoush NaVart), who reveals that she too was once as prejudiced as they. Finally, a movie that makes “Crash” look like “Do the Right Thing.”

On that note, when a film is split between a half-dozen protagonists and set in a city that is 51 percent black, it really doesn't seem unreasonable to wonder why it couldn't make room for a woman of color or two among the major characters. (Then again, with roles like these, maybe it's for the best.)

Stranger still is the prevalence of the male gaze in a film about motherhood. No one breastfeeds in “Mother's Day,” but the camera seems to be angled directly down Aniston's cleavage in most of her scenes, and one strange sequence sees Hudson spill a glass of water on her shirt just so she can strip down to her bra while changing it.

One keeps expecting the mishap to set up some kind of joke, but none arrives — who exactly is this film for?

Save for a few minor ADR issues, the film's craftsmanship is fine, and production designer Missy Stewart floods the sets with so much floral greenery that the whole movie might as well take place inside a Mother's Day bouquet.

It's hard to fault the cast, given the scraps they're forced to feed on, but only Aniston manages to inject any real life into her performance. She even has the film's best line: Aghast at her ex-husband's suggestion that their kids spend Mother's Day with their new stepmom, she shoots back, “You can have Flag Day!” One just hopes that isn't Marshall's idea of a sequel.