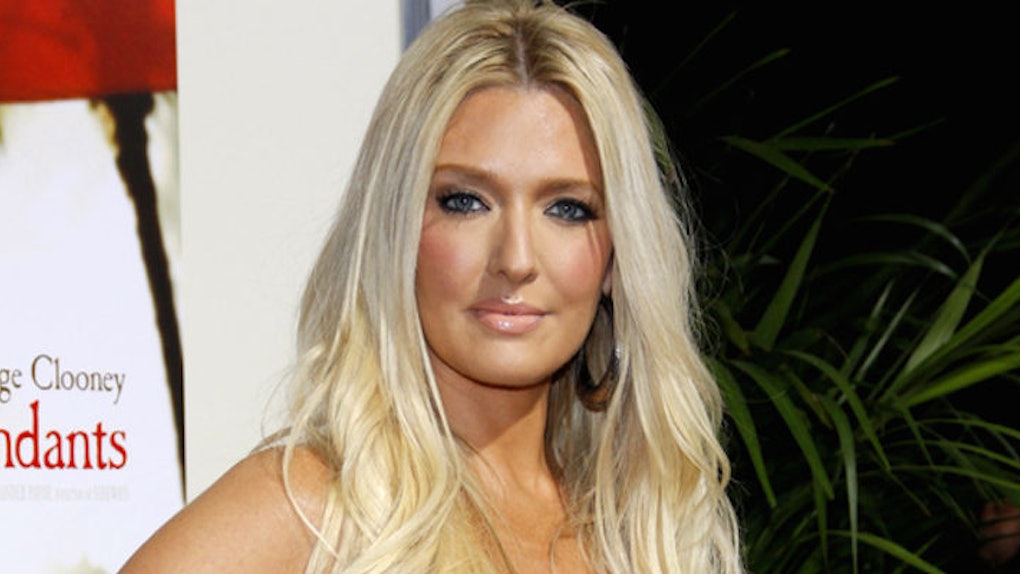 If you're anything like me, you've mindlessly watched every "The Real Housewives" series for quite some time, and now, you're wondering,“When will some of these angry women retire?”

Just when I was about to give up on the cattiness and vapid wasteland that is “The Real Housewives of Beverly Hills,” in swept a breath of fresh air, decadence and realness: Miss Erika Jayne Girardi. At first glance, her big blond hair and too-perfect face left me expecting another attention-hungry woman desperate to hang on to her 15 minutes of dwindling fame. It's hard not to generalize based on her perfectly over-the-top appearance, especially when "The Real Housewives" crew has dished out the same recipe for drama year after year (which — don't get me wrong — I kind of love).

That said, I imagined my interest in the season would fizzle after just a few episodes, as per usual. But after my first hour with Erika, I was hooked in a whole new way. My girl crush levels reached level infinity as I watched her own her sh*t moment after moment, and situation after situation. Never once did she apologize for who she is.

You see, after 32 years of living a far from self-assured life, I recently started coming into my own as a capable and strong woman. I've been building my self-confidence levels, learning to stand up for myself and owning who I am, flaws and all. Maybe this is why I've taken such a liking to this empowered piece of feminist amazingness. Maybe it's because she never once wavered when being grilled about her lifestyle, her much-older husband, her overt sexuality or her loyalty to her friends.

Here are five reasons to love Erika “Erika Jayne” Girardi (both personas), and why you should never hate on woman who is all about being this real:

In one of her amazing interviews, with her hair pulled tight and makeup on point, Girardi makes it clear that she eats a lot and loves to do so. She also doesn't hold back when it comes to treating herself. Even by just watching her order a slice of cake for herself at a lunch with her husband, you can see how much she loves herself and how she makes no apologies for giving her body what it wants.

She said, “I want to eat like those Beverly Hills bitches, but I just can't.” Now, you tell me if any other of "The Real Housewives" can confidently take down a dessert on her own without freaking out about the calories.

4. She doesn't hide behind her mistakes.

No one is perfect; this we know. It's hard to maintain your dignity and self-respect when you're constantly confronted with women who would love the opportunity to tear that down.

So, did Girardi make a comment about another housewife in private? Yes, but to be clear, she did it to protect someone she cared about. She even ended up owning up to it. She acknowledged she said it, while simultaneously making that person (Vanderpump, I'm looking at you) own up to her flaws as well.

The takeaway here? We all mess up from time to time, but how many of us fess up to committing our crimes? Exactly.

Outside of the show? I've read all sorts of reports about this woman, including that she's abandoned her son, she's a gold digger and she used her husband's status to get ahead. The thing is, true or not, these things are in her past. To date, she's been a committed wife for over 15 years, and she didn't begin her show business career until she had been married for many years. She also happens to have a great relationship with her son.

While I'd be bummed to hear some of these accusations are true, I believe in innocence until proven guilty, just like her successful attorney-husband.

Almost all of the housewives will stop at nothing to make themselves look good or to have the last word, even if it means throwing a friend (or sibling) under the bus. Not this babe, though. As evidenced by her staunch commitment to Yolanda Hadid (another rock star in the series), her friendships never waver.

When Yolanda found herself the unfortunate punching bag for the group's harsh and mean-spirited criticism for her illness, Girardi refused to run her mouth at all. When others did, she politely shut them down. When the unfortunate dissolution of Yolanda's marriage to David Foster came to light, Girardi was expected to dish the details. And no matter how much screen-time that would have guaranteed her, she refused.

2. She shut down the haters with one simple comment.

On the recent reunion show, sometime before or after her heart-pounding "Pat the Puss" demonstration, Andy Cohen read an email that asked Erika, “Why so sexual? And aren't you a little old to be prancing around like that?”

Erika responded, “I am not too old, and I'm sorry that you have given up on life. But, I have not.'' Boom! She is a woman who truly and completely owns her sexuality.

Say what you want about the video and the song, but I think at this point, we can acknowledge Erika Jayne Girardi absolutely lives her message. She doesn't give a f*ck, she never has and apparently, she isn't about to start.

Isn't that what empowered womanhood is all about? Living your life in a way that feels true to you, all while remaining loyal to the people in your life? For me, it does. That's why this puss-patting superwoman will forever be the baddest and realest housewife of all time. Now, let's do lunch, girl. I like dessert, too.