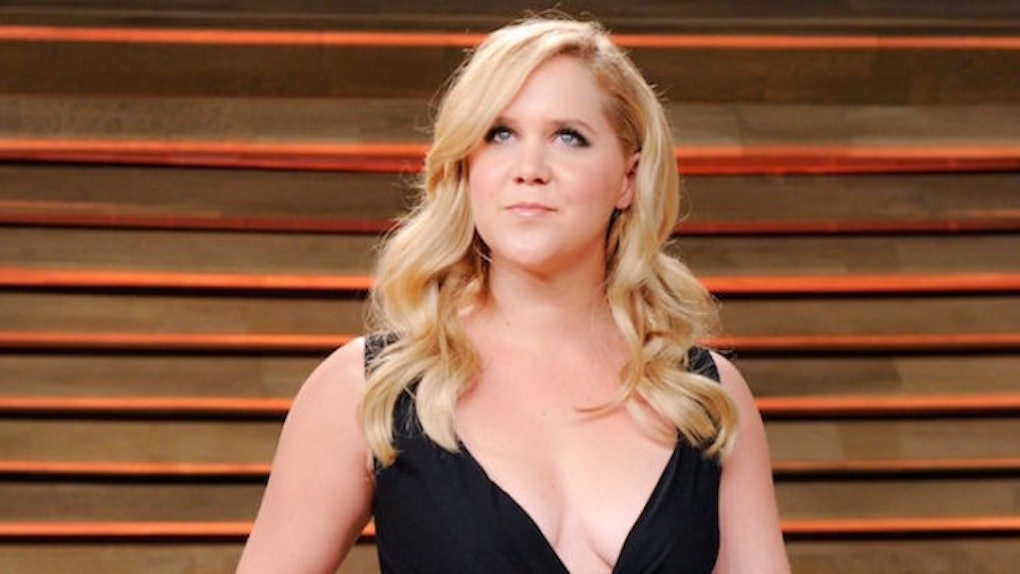 10 Ways To Have The Best Year Ever, As Told By Amy Schumer

There's no denying that 2015 has been the breakout year for Amy Schumer.

Not only has her Comedy Central show, "Inside Amy Schumer," climbed to the top in its third season, but Amy has also managed to write and star in "Trainwreck," her first major film and Hollywood vehicle.

Alongside that, she's hosted the MTV Movie Awards and filmed her own comedy special.

With these great successes in mind, it's obvious that her success is inspirational and something we'd all like to achieve.

Let's take a look at how Amy can guide us through a successful and fulfilling 2016.

What others think of you is pretty irrelevant in the grand scheme of things.

Having the power and ability to believe in yourself is one of the biggest achievements you could ever have, and will help you go from strength to strength.

The key to success, according to Amy, is to have a healthy and balanced diet.

Make sure you counteract your vices with a thought-out diet and appropriate exercise.

Not only will your body thank you, but your mind and mood will be pretty grateful, too.

Balance, in all aspects of your life, is the key to success.

The best giveaway from this quote is to say what you feel and not what you think others want you to say.

This upcoming year, do your best to believe in yourself and say how you really feel – without fear of rejection.

Plus, having a good time and making people laugh can help you make friends and maintain relationships.

4. "It's work having a vagina. Guys don't think that's work, but it is. You think it shows up like that to the event? It doesn't. Every night, it's like getting it ready for its first Quinceañera, believe me."

Pretty straight to the point with this one.

Appreciate the hard work that people do for others, even if it's only the little things.

5. "I will speak and share and f*ck and love and I will never apologize to the frightened millions who resent that they never had it in them to do it."

Be proud of your achievements and successes.

Just because someone may be jealous or hold a grudge because you did something that they couldn't or haven't done, does not give them the power to make you feel guilty.

Stand your ground and shine.

Who doesn't love coming home and throwing on the first pair of sweatpants in sight?

They are heaven in the form of comfort. Also, if Amy says its fine then who are we to argue.

7. “I may sound like a megalomaniac, but I feel like I'm equipped to become a great, memorable comedian, if I keep working my ass off and staying at the pace I'm at, and I feel a responsibility to do that because of the women who have done it before me, and the ones who need to do it after me.”

8. “The moments that make life worth living are when things are at their worst and you find a way to laugh.”

It takes a comedian to tell us to find the funny in life. Sometimes life sucks, it's inevitable. Make the best out of a bad situation, shrug it off and laugh about it with your friends. It's probably not worth the tears and stress.

9. "I wrote an article for Men's Health and was so proud, until I saw instead of using my photo, they used one of a 16-year-old model wearing a clown nose, to show that she's hilarious. But those are my words. What about who I am, and what I have to say? I can be reduced to that lost college freshman so quickly sometimes, I want to quit. Not performing, but being a woman altogether. I want to throw my hands in the air, after reading a mean Twitter comment, and say, 'All right! You got it. You figured me out. I'm not pretty. I'm not thin. I do not deserve to use my voice…. All my self-worth is based on what you can see.' But then I think, F*ck that."

Exactly, f*ck what people think. You do you.

10. "Now I feel strong and beautiful. I walk proudly down the streets of Manhattan. The people I love, love me. I make the funniest people in the country laugh, and they are my friends. I am a great friend and an even better sister. I have fought my way through harsh criticism and death threats for speaking my mind. I am alive, like the strong women in this room before me."

Those who fight through sh*t to get what they want in life have the best stories to tell.

Forget the naysayers; be true and there for those that matter to your life and don't stress out about the rest. Battle your way to the top. You deserve it.

And there we have it, how to get by in 2016 via the words of the one and only Amy Schumer.

Hopefully this New Year will be even better than the last.