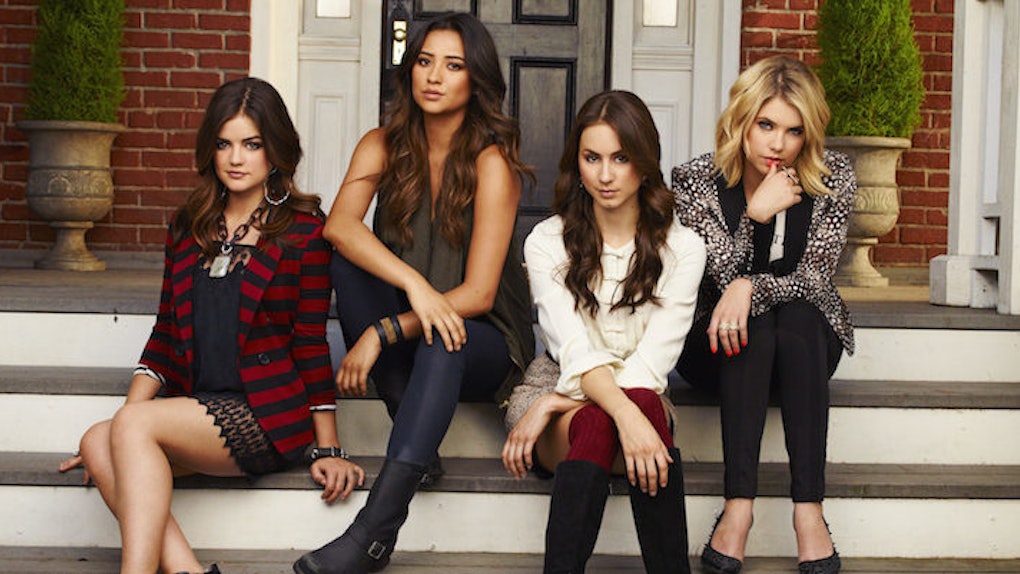 'Pretty Little Liars' Premiered And It's Still As Confusing As Ever

If you’re friends with a girl, chances are your social media exploded last night with some sort of variation of “'PLL' IS BACK. DON’T TALK TO ME.”

When we left the girls, A (Or, should we just start calling him Charles since we found out his name?) had kidnapped the girls, placed them in his own personal dollhouse where he’s been keeping Mona and had them put on a phony prom.

Spencer had devised a plan to get them out, but they found themselves surrounded by an electric fence in the middle of nowhere.

Last night’s episode picked up exactly where the last one had ended, with the girls outside of the underground bunker, unsure of what their next move is.

While they try to conceive a plan, Charles locks them out of the bunker as punishment. And, while the girls are struggling to survive, much is happening in Rosewood.

Ali has been released from prison and cleared of the murder charges for Mona’s death.

She releases a statement saying it’s been a nameless, faceless threat that has been torturing her and her friends, and he’s the one who has kidnapped the girls.

It’s all an elaborately worded statement full of clues for A, who they suspect is Andrew, to meet her in the woods at the kissing rock.

Her phone rings and they triangulate the phone coming from upstairs in the DiLaurentis home.

Alison is gone, and now, it’s all a game of cat and mouse.

(I’m not one for spoilers, so I’ll skip the recap and move on.)

There were so many questions from last night’s episode, I felt like I didn’t learn anything new.

Sure, we learned Spencer put it together that Charles is part of the DiLaurentis family because, duh, she’s Spencer Hastings and she’s a genius.

We learned there’s another doll Charles has been hiding. We know the police think it’s Andrew. But, come on, guys.

While my sister and I practically hovered inches from the TV screen last night, it seemed out of nowhere, something happened that made the girls scream, and suddenly, they were back in outfits directly from season one.

With Spencer in a hideous sweater, Emily decked out in her swim gear, Aria with her pink highlights (and mysteriously shorter hair) and Hanna getting off kind of easy in a floral shirt, we feel like we’re back to square one.

Meaning, we still have just as many questions and just as few answers.

How did the other doll not speak up when the girls were running around? How did she not want out? How had they, especially Mona, not found her before?

Why would they make Andrew A in such an obvious way when the show prides itself on clandestine clues and trickery?

And, why won’t they just tell us what the hell happened with the surprises A left them in their room before the three-week time jump?

I feel like that was significant and something we should have known! I think what’s so addicting about this show is the cat and mouse game they’re having us play. The audience knows almost as little as the liars do.

They leave us in as much suspense as the girls are. When we think we know an answer, it turns out we’re almost always wrong.

It frustrates and annoys us, but we continue watching because we have to find out the answers. We have to understand why this is happening to these girls.

Based on last night’s episode, it’s safe to assume that season six is going to be a real doozy and pretty dark.

They found the dollhouse and whom they assume is A (again, I refuse to accept Andrew is A simply because it’s so obvious), so the girls are starting to have the upper hand.

What is A going to do now that the girls are starting to piece everything together?

He’s been smart and 10 steps ahead this whole time, but he clearly never anticipated this. Will he have to think up an entire new strategy?

For those of us who anticipated (wrongly, such as myself) that we would get any answers or even a glimpse of who Charles is on the premiere episode, we were once again proved wrong.

We’re left counting down the days until the next episode and theorizing based on what we learned and what the previews showed. Some of us might even watch it again to make sure we didn’t miss anything.

But, it’s okay, guys. Answers are coming. I just know it.