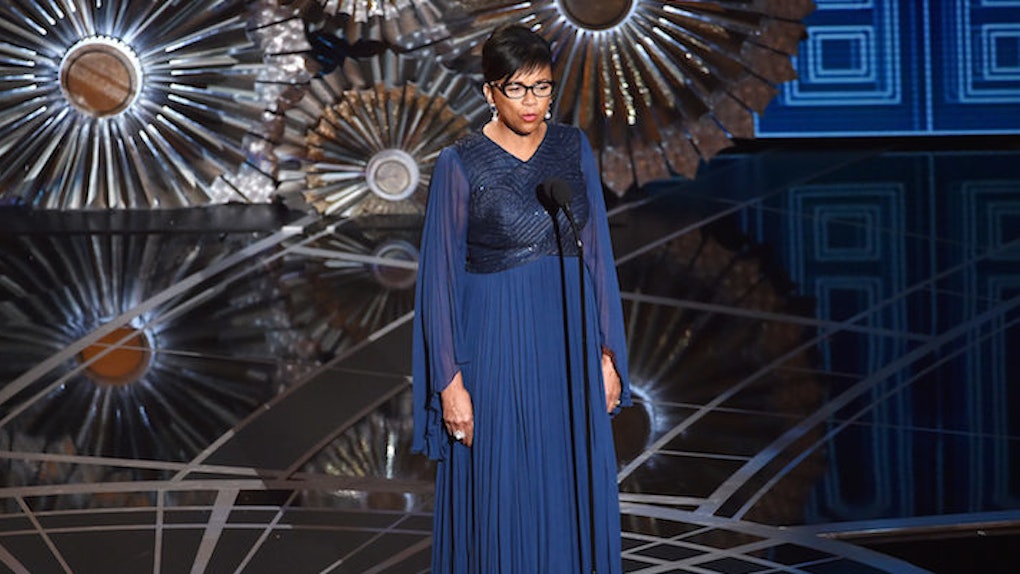 The nominations reveal for the Oscars is supposed to be a moment of glee and pride, celebrating the best moments in cinema over the past year.

However, there are some real complaints to be made about this year's batch of nominees.

For the second consecutive year, the nominations have revealed a real lack of diversity among the big leading awards.

All nominees in the leading and supporting actor categories are white, which has resulted in public backlash.

The issue has gotten so extreme, the president of the Academy Awards has had to speak out publicly.

According to the New York Daily News, Cheryl Boone Isaacs has said:

I'd like to acknowledge the wonderful work of this year's nominees. While we celebrate their extraordinary achievements, I am both heartbroken and frustrated about the lack of inclusion.

This is a difficult but important conversation, and it's time for big changes. The Academy is taking dramatic steps to alter the makeup of our membership.

You can read the full statement in the tweet below:

The backlash from the lack of diversity has resulted in Spike Lee and Jada Pinkett Smith both simultaneously announcing they will be boycotting the Academy Awards in February.

Further attendees could be following suit.

So, moving forward, what can be done to try to bring a more diverse selection of nominees?

1. Continue to focus on the inclusion of diverse members to the panel.

Back in 2012, a report by the Los Angeles Times found that 94 percent of the voting panel was Caucasian, with 77 percent being male.

This is simply unacceptable.

How is the Oscars supposed to represent cinema as a whole when the voting panel only covers such a small percentage of the population?

To be fair, the Oscars have been trying to move forward since then.

The appointment of Cheryl Boone Isaac as president back in 2013 was seen as a move toward making a change. However, the Academy is clearly not moving with the times quickly enough.

In June 2015 -- following a similar backlash for the 2015 nominations -- the Academy elected a record number of women and ethnic minority candidates into the voting panel.

This is great for moving toward a more diverse vote. However, more needs to be done.

Continually adding minorities to the Academy will help add different voices and opinions.

Ultimately, this will help to represent the views of a wider population.

A further reading of the 2012 Los Angeles Times report found that the median age of Oscar voters was 62, and that voters under the age of 50 constituted just 14 percent of voters.

While it's quite understandable that with age comes an experience of the industry, it's also vital that younger members have a voice.

Their vote will help bring a more diverse range of nominees to the table, as well as a completely different set of opinions as compared to the majority of the other voters.

In her recent statement, Boone Isaacs highlighted the fact that in the '60s and '70s, the intention of the panel was to recruit younger members to help the Oscars stay relevant.

What was her intention for 2016? Boone Isaacs said,

In 2016, the mandate is inclusion in all of its facets: gender, race, ethnicity and sexual orientation.

We must return to these intentions in order to help the Oscars move forward.

3. Accept that this is not a "Hollywood only" problem.

We all can be part of the change toward a more diverse and accepting community.

We need to accept that this problem does not exist strictly at the Academy Awards. This is a problem happening all over the world, to all kinds of people.

While revealing his boycott of the Oscars, Spike Lee addressed this issue head on. He stated,

The Rooney Rule states NFL Teams must interview minority candidates for the positions of Head Coach and Senior Football Executives before hires. Facebook and Pinterest have their own version of the Rooney Rule to hire minorities. Why can't Hollywood do the same? It's worth the effort, or it will be the same old hijinks.

Hiring minorities should not be the result of backlash. It should be a standard practice in not only Hollywood, but all industries.

Going forward, the Oscars needs to accept there is still a lot to do.

All eyes are on the academy to make a substantial change.