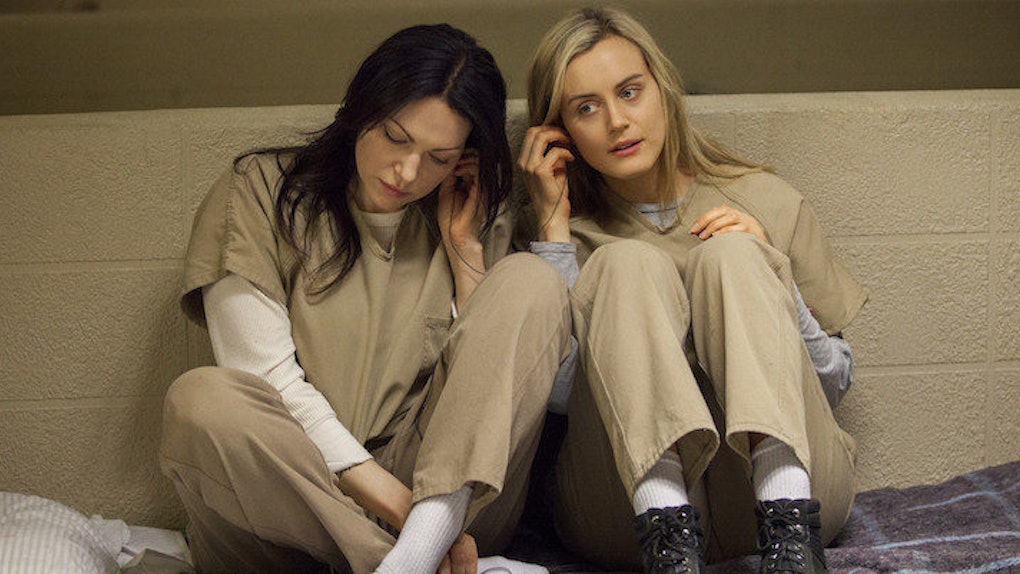 How The Inmates Of 'OITNB' Teach Us A Lesson In Compassion

Warning: This article contains spoilers from season three of "Orange is the New Black."

When I was young, my mother recounted a story about a family on a train. The train ride would be long, one that would last several hours and carry a number of people.

The cars filled quickly as passengers boarded and settled in for the long haul. Just a few moments before the train was scheduled to leave the station, a man and his three sons boarded.

The man quietly took his seat beside the window, but his children, rampant and raucous, did quite the opposite.

They ran up and down the aisles, bumped into other riders and carried on loudly.

The other passengers began to exchange looks after some time, as the children's unruly behavior did not subside.

They rolled their eyes with every shriek, and shot irritated glances at the boys' father, who was totally unperturbed by the chaos.

With each passing minute, the riders' patience lessened and their frustration grew. They began to whisper amongst themselves.

"He doesn't even discipline his kids," someone grumbled.

"Someone needs to say something," another asserted.  "Otherwise, this will go on for hours."

"I'll talk to him," a woman volunteered.

She approached the man, the kids still running and yelling in the aisle, and cleared her throat.

"Excuse me, sir," she started. For the first time since boarding, the man turned his attention away from the passing landscapes outside and looked at the woman. A few heads turned and poked through gaps between seats to observe the exchange.

"Your children are out of control and really bothering the other passengers," the woman continued. She braced herself, expecting him to put up a fight.

Instead, his face softened. "I am so sorry," he apologized profusely. "I, I didn't realize. I'll do something about it."

He lowered his voice, "We just came from my wife's funeral and I didn't even notice what they were doing."

The woman uttered a stunned apology and returned to her seat.

Upon awareness of that small yet significant detail about what the man and his children were going through, the atmosphere of the train car changed drastically.

Where there was once an air of frustration, annoyance and anger, there was now compassion, understanding and love.

Instead of grumbling and rolling their eyes at the disorderly children, the passengers began to show them kindness and affection. They began to show patience and understanding toward the grieving widower.

Just by knowing a simple backstory of the family, they were able to understand that the disruptive boys were acting out as an emotional response to losing their mother, and their father was not a poor parent, but deeply distracted by a traumatic event.

Moral of the story? Live with abundant compassion for others because you simply don't know what any given person is going through at any given time. Which, I know, is easier said than done.

As I binge-watched the third season of "Orange is the New Black," I couldn't help but remember this allegory. It had been years since it had been told to me, but the story stuck out in my mind vividly.

Beneath the scandalous, sexually-charged plot lines that would make my grandmother cringe, the girls in tan scrubs actually address a pretty significant concept.

There's a deeper moral of the story to be unearthed in "OITNB," besides the obvious takeaway that Ruby Rose is every man and woman's dream girl.

How oxymoronic that a racy show about incarcerated criminals, those who society is less apt to forgive, could teach compassion and forgiveness? But it does, and brilliantly, at that.

The show doesn't address showing compassion for the easy stuff, because that would be, well, too easy.

It doesn't address forgiving your friend who borrowed your favorite blouse without asking and spilled red wine down the front. It doesn't address showing compassion for the girl who slept with your boyfriend when he told her he was single.

"OITNB" addresses forgiving the individual who physically attacked and tried to kill you.

It's about forgiving the person who put you behind bars. It's about choosing not to take an eye for an eye and go all "Girl with the Dragon Tattoo" on your rapist. It's about big, serious, unforgivable sh*t.

Yet, in the show, we see forgiveness for these big, serious, unforgivable wrongdoings.

We, as viewers, forgive the characters, too. Fictional or not, it serves as a great message and moral that we can instill in our (hopefully) less dramatic day-to-day lives.

We're reminded to consider the backstory of those who hurt us.

We're reminded to take a hard, honest look at one's individual story, where he or she comes from and the hardships he or she has endured as a means to understanding why this person does what he or she does.

It's much more difficult to hate when you know the full story.

Then we were exposed to her story. We saw her desperately try to befriend and fit in with the mob wives. We saw her lose. We saw her try to pick up the shattered pieces of her pride.

We saw that despite Red's hard exterior, she had a soft side and a strong, caring maternal instinct.

Her girls and her cuisine were the only sources of pride she had to hang onto in prison, and without knowing any better, Piper took one of those away.

We then understood her bitter response. Despite her cruel behavior, Red suddenly become much more relatable and likeable.

You see, the "OITNB" writers don't allow characters to be hated for long. Nobody is a permanent antagonist.

Instead, the writers delve into the hidden, vulnerable sides of even the most hardened criminals, explaining the initial emotional drivers behind doing the things that would eventually land them behind bars.

Without words, they explain that even the worst offenders are still human. And they repeat this lesson over and over again throughout the seasons.

When Leanne's fixation with the cult-like following and glorification of Norma started to irk us, it was revealed that Leanne's upbringing in the Amish lended itself to this tendency.

When her cruelty toward Soso broke our hearts, we found she had experienced similar cruelty as a teenager by the hands of her own family and tight-knit community.

When Miss Claudette terrified us with her no-nonsense attitude and swirling rumors of murder, we found she had a good and affectionate side.

We found that the woman who received no mail, phone calls or visitors was actually still capable of love.

Even Pennsatucky, the infamous abortion-clinic killer was somehow able to win us over down the road. We couldn't stand her with a fiber of our being for a while.

She was barbaric, manipulative and quite frankly, insane.

But then, in the third season, we were suddenly allowed to see this hot-headed, bible-thumping, tattletaling murderer in a new light.

Upon the disclosure of her dark past, one of drug abuse and sexual assault, it occurred to us that Pennsatucky is only human.

And, in present day, when offered the opportunity to seek violent revenge on one of her attackers (something she would have jumped at in the past), we see her grow and learn from her mistakes.

We see that she's capable of feeling compassion toward someone who showed her no compassion.

We're pretty messed up — every single one of us -- on some level. It's a part of being human.

We all have our pasts that we must accept in order to move forward. We all have our demons we must face. And, whether we like it or not, these things define us.

Our backstories can influence how we address future situations, and they can also serve to make us stronger.

This is not my roundabout way of saying we should give rapists the excuse to rape, murderers the excuse to murder and set free all incarcerated criminals (read: It's not.).

But, considering where someone comes from or what he or she is currently going through might shed some light on why that person may choose a life of crime.

Crime is not to be celebrated. Crime, rape, theft, abuse and murder are not to be accepted or tolerated. These are despicable, heinous choices and should be punished accordingly.

However, forgiveness and compassion should not be forgone.

We don't know what any given person has been through and what motivates a person to choose a specific course of action.

And unlike "Orange is the New Black," real life doesn't come with convenient flashbacks to let us know what has happened in an individual's life to shape who he or she has become in present day. Most times, we don't find out.

Most often, we don't know why the man on the train isn't controlling his kid's behavior.

We don't know why the woman in the checkout line snapped at the cashier. We don't know that the reason the bully torments the weaker kids is because the bully is abused in his own home.

We simply don't know, and that's why showing compassion is always better.