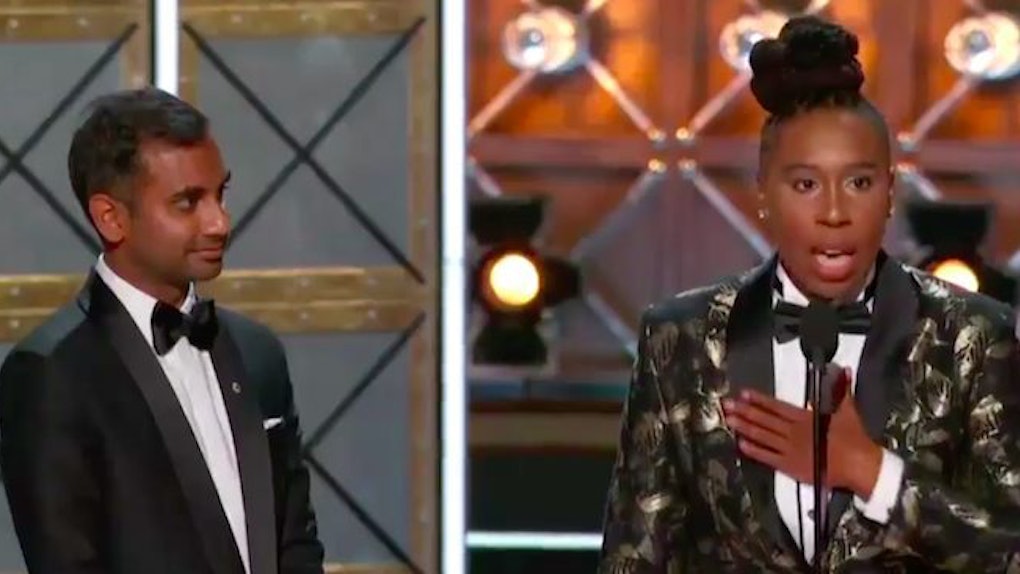 Emotional speeches are always part of awards shows, it's just a fact. Sometimes winning artists take their time on stage to make pointed, political statements, and other times they use their time to thank their coworkers, their parents, their friends, and many others, oftentimes in tearful, overwhelming addresses. Of course, the Emmys is no exception and Lena Waithe's acceptance speech at the Emmys this year is filled with powerful emotion that will bring you to tears.

The writer made history when she became the first African-American woman to accept the Emmy award for Outstanding Writing in a Comedy. (For reference, this is the 69th annual Emmys... how has it taken this long?) Waithe's win is for an episode of Netflix's Master of None she wrote entitled, "Thanksgiving," which focuses — through a series of flashbacks and present day narration — on a black woman named Denise coming to terms with her sexuality and coming out to her family. The story Denise tells in Master of None is based on Lena's real life coming out narrative, which makes it even more touching in my opinion.

Waithe's accomplishment was not at all lost on the audience as she stood alongside her Master of None partner in crime and the show's creator, Aziz Ansari, to deliver a poignant and powerful speech. Indeed, her time on the stage was one of the best, most genuine moments of the entire night and her passion and gratitude were visible throughout her entire speech.

Waithe was nominated in her category alongside writers from heavy hitter shows like Veep, Silicone Valley, and Atlanta, so toward the final moments the competition was fierce. In fact, the writer was visibly surprised by her own win. Despite her shock, though, Waithe's speech was put together, and had an amazing, powerful, and uplifting message to her "LGBTQIA family" in which she said,

Last, but certainly not least, my LGBTQIA family. I see each and every one of you. The things that make us different, those are our superpowers; every day when you walk out the door, put on your imaginary cape and go out there and conquer the world, because the world wouldn't be as beautiful as it is if we weren't in it. For everybody out there that showed us so much love — this episode — thank you for embracing a little Indian boy from South Carolina and a little, queer, black girl from south side Chicago, we appreciate it more than you could ever know.

Of course, the good people of the internet just melted when Lena gave her speech. As one of the most encouraging and touching speeches of the night, how could they not?

Weithe's win took the Emmy audience by storm, as well. Before the winner even got to the stage she was met with a standing ovation from her peers, which was led by the night's winner for Best Lead Actor in a Drama Series, This Is Us's Sterling K. Brown, who was quickly joined by the rest of the audience.

Waithe's history-making win puts her in great company, too, as it comes only two years after Viola Davis had us all in tears when she become the first African-American woman to win an Emmy in the category for Outstanding Lead Actress in a Drama Series. Hopefully Lena and Viola are only the first in a long line of minorities to win awards for their talent and hard work. Here's to another year filled with TV shows that are inclusive, representative, and amazing.