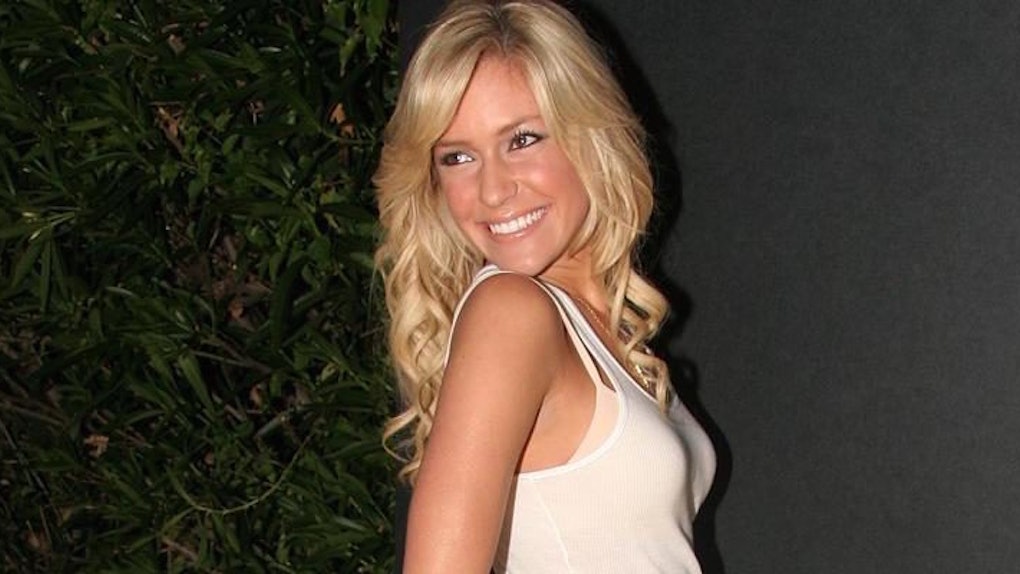 Just like a visit to a glitter factory, what happens in Cabo certainly doesn't stay in Cabo.

I'm of course referencing the defining episode of “Laguna Beach: The Real Orange County," titled “What Happens in Cabo." You know, the one where Stephen Colletti calls Kristin Cavallari a slut mid dream Cabo vacation. You remember it. We all remember it.

OK, just in case you suffer from amnesia that cancels out all SoCal-centric memories you have from 2004 to 2006, here is a quick "LB" recap to catch you up.

Stephen and Kristin were on-again, off-again pretty much the entire run of "Laguna Beach." At some point, Lauren Conrad was added into the mix, which led to a love triangle I can only assume resulted in producers high-fiving CONSTANTLY in the MTV editing bay while dancing to that "We're in the Money" song Daffy Duck occasionally dances to.

The "LB" gang was on spring break in Cabo San Lucas while Kristin was dating some other random guy who wasn't Stephen, which led to the iconic scene above.

Almost 12 years after the show ended, Kristin finally dishes in her book, "Balancing in Heels: My Journey to Health, Happiness, and Making it all Work," on what it was like to live in a reality show. She writes,

Normal high school relationships are dramatic enough, but ours now had the added pressure of being seen by MTV viewers across the country as well as being manipulated by the show's producers, a set of adults were very suddenly involved in the intricacies of our lives. Surprisingly, the producers had a bigger effect, as they controlled and mapped our lives more than we were aware. One of the most hurtful things they did was pressure Stephen to spend time with another girl from the show, Lauren, while he and I were dating. It certainly provided some juicy conflicts, but it also affected me deeply. I felt threatened. On one side, it seemed like the producers were trying to break us up, which was intimidating. On the other side, I was worried that my relationship with Stephen was becoming less stable, even though I knew if we hadn't been on television, he wouldn't have been spending time with another girl.

Just as expected, having your life be the subject of a reality show seems like a mess.

In the book, Kristin also says,

She also talks about how she was labeled the bad girl of the gang, saying,

The fact that I didn't take life too seriously and was a bit of a party animal didn't often put me in a good light. On a trip to Cabo San Lucas, when Stephen and I were actually broken up, I jumped up on the bar to dance with my girlfriends. Then I kissed a guy I was seeing at the time, completely unaware of how my actions were affecting Stephen (only teenagers are able to be so self-involved!). Not one of my better moments! Then Stephen started shouting 'slut!' at me from across the bar. It was a scene. There are certainly some clips I wish I could erase from everyone's memory.

Elaborating on that scene in Cabo, she says,

During that same trip to Cabo, I had to go to dinner with the cast -- whom I normally wouldn't go to dinner with -- and Stephen was mouthing 'I love you' and being incredibly sweet to me even though we were broken up. But during editing, the producers made it seem like he was saying a lot of that to the other girl he was 'seeing' and that I was rolling my eyes at him, which wasn't the case. Pretty deceptive! Producers also had Stephen go up to this same girl's house to hang out, which they made me believe was all on his own, so the joke was on me. Later I [found] out they told him to go.

She also reveals how the show essentially ruined any real chance at her having a relationship with Stephen, adding,

What Stephen and I had together was real, and that's what made me get through the producers' attempt at manipulating us. We talked about everything the entire time. When we saw each episode, it was clear to us what was real and what was fake... but that still didn't make it easy. I think always having my guard up for those couple of years filming made me reluctant to trust men.

At the end of the day, don't feel too bad. It all worked out for Kristin. She married a subpar Chicago Bears quarterback and spelled her kids' names -- Camden Jack, Jaxon Wyatt and Saylor James -- with the most YOLO attitude of all time.