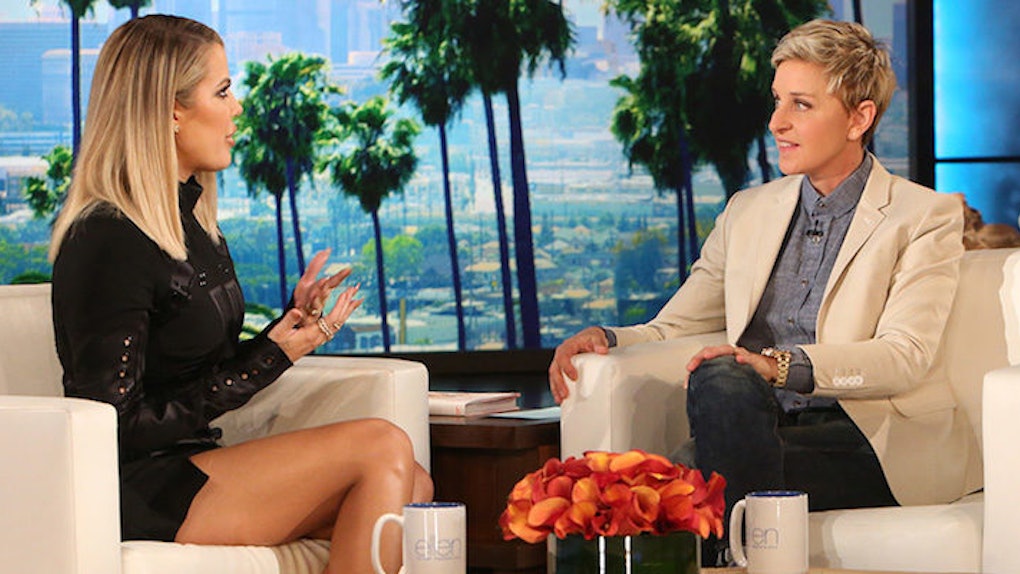 On Monday's "The," Khloé Kardashian stopped by to chat with Ellen about the bittersweet release of her new book, "Strong Looks Better Naked."

When Ellen broaches the topic of Khloé's novel and how it has empowered the reality TV star, she asks how the project started.

I was going through a difficult time in my life … And it really just prompted me, like, I feel like if I have a platform that could help better some, even just one person, I feel like that’s what my platform should be for. And I just felt like it was the right time. And the crazy thing is as much as I went through everything that was dramatic, and I feel like your scars make you better and tell a better story in life, but this book is very much what I’m living right now. And if this would have happened I think two years ago, I don’t know if I would have been strong enough to even have the tools to deal with what I’m dealing with now or be able to balance everything so it’s just really ironic that I’m promoting this book, but I’m actually, like, living what I wrote about. I was in just a depression, but also I did not know what to do with all the anxiety, and [going to the gym] became a healthy obsession, and I felt so great.

When she mentions "what [she's] dealing with now," Khloé is, of course, referring to the recent hospitalization of husband Lamar Odom.

Following an incident at a Nevada brothel, Odom was in a coma for three days and is now undergoing therapy to improve his cognitive function and mobility.

In the video above, Khloé talks about her and Lamar's postponed divorce and how it has affected her relationship with boyfriend James Harden.

We tell [Lamar] he had a brain injury; I can't tell him how that brain injury was caused 'cause it will set him back ... He's never asked why he's here ... He's really confused a lot ... Every day is different ... I'm there helping him and I love him and I've always loved him and that will never change. And I just think it's a really insensitive thing to fast-forward a divorce ... And he's a fantastic person who deserves support and love and for someone to be by his side. For me, I'm that to him. And I have a great boyfriend who is understanding ... It's definitely a unique situation, to say the least.

So, despite classic assumptions of the Internet, James Harden is not heartbroken over Khloé choosing to stay married to Lamar, as it is obvious she made the decision for all the right reasons.

As for the holidays coming up, it's unclear whether both Lamar and James, one or the other, or neither of them will be attending the Kardashian festivities.

Caitlyn Jenner, however, will be joining Khloé and the rest of the crew, including ex-wife Kris Jenner, for Christmas.

Check out the video below for more on Caitlyn's role in the family since her transition.