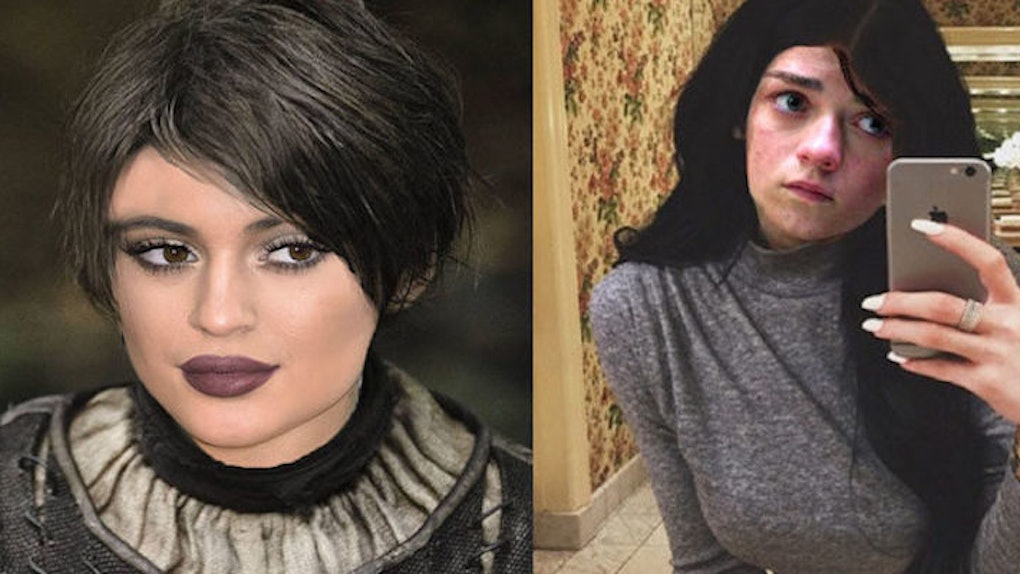 If I really think about it, “Game of Thrones” and “Keeping Up With the Kardashians” aren't that different. I mean, with constant sibling rivalries, family disputes, dramatic arguments and the underlying themes of wealth and power, the shows are basically one in the same, right?

As a die-hard Thrones fan and hate-to-admit-it Kardashian lover, I know this is a stretch. So please, spare me your eye rolls. But after heavy research and consideration, it's become clear the Kardashian Klan certainly has their place in the Seven Kingdoms.

From Calabasas to Westeros, there really are only some minor differences.

Take a look at your favorite reality family reimagined into the world of Thrones.

As head of House Kardashian, Kris embodies the essence of Lord Tywin Lannister. The same way Tywin manages his three children, Kris could easily be the momager of Casterly Rock. Both are persistent, calculated, intimidating and ruthless leaders.

While Tywin met his match in his youngest son, Kris has not faced the same fate with her youngest... yet.

Kim and Cersei have more in common than just their impeccable cheekbones.

Both doting and obsessive mothers, Kim and Cersei understand what it takes to rule an empire. These women married into royalty, walk around with crowns (physical and metaphorical) perched on their heads and if they are not perfectly dressed, their boobs are out.

Between getting drunk, throwing insults and generally being the funniest parts of their shows, Tyrion Lannister and Khloe Kardashian know what's up.

These two tell it like it is, specifically to the heads of their families. Tyrion's feelings toward his father are pretty much summed up by the time he shot him with a bow and arrow, and Khloe's by answering phone calls from her mother with the loving, “Hi, Satan.”

This one was a little tricky. Of course, Jon Snow has to have a Kardashian Kounterpart, but who could it be? Kourtney best fits the bill. Like Jon, she's a loyal, trustworthy do-gooder who loves wearing fur.

And while Jon Snow fell for the likes of a rebellious Wildling who sadly left him, Kourt was left by a rebellious Long Islander. Also, they both have unreal hair. See, this isn't a stretch at all!

Bran Stark and Rob Kardashian have been MIA this season, and it can be assumed they're both on some type of journey to self-discovery. There are theories and hypotheses galore on what the younger brothers have been up to.

We met Arya and Kylie when they were the innocent and feisty youngest sisters of their shows. Since the first seasons of “GoT" and “KKWTK," they have both LITERALLY gotten new faces.

In her quest to become “no one,” Arya aims to serve the Many-Faced God by changing faces and becoming an assassin. Kylie, on the other hand, has been worshipping a different Many-Faced God: her plastic surgeon.

Similarly to Arya and Kylie, Sansa and Kendall have changed drastically since season one. Both girls started with the minor trials and tribulations of dealing with annoying younger sisters, having celebrity crushes and finishing their daily chores.

These days, their paths have slightly diverged as Sansa fights for her life and freedom in Winterfell and Kendall is fighting to be a world-renowned model. That's like, basically the same thing. Regardless, both are dressing in much darker hues these days.

Both Daenerys Targaryen and Caitlyn Jenner started their journies in completely different places than where they are now. They began as underdogs with no power, quietly and obediently following the orders of their families.

Since then, these two have transformed into the strongest, most respected women in their respective kingdoms, leaving us all cheering "YASSSS QUEEN KHALEESI, SLAY."

Cunning, convincing and an unmatched willingness to do whatever it takes to get on top: Lord Petyr Baelish and Kanye West are basically #twinning.

While Yeezy is climbing his way to the Presidential Race of 2020, Little Finger is constantly rising higher and higher toward the Iron Throne. It's obvious they both have more than a few tricks up their sleeves, and we're all patiently waiting to see who Kanye pushes out the Moon Door on his rise to power.

And evil takes a human form in Joffrey Baratheon/Scott Disick. It's no secret Scott, the self-proclaimed Lord, puts himself on a pedestal. Similarly, Joffrey is placed on the Iron Throne and ruthlessly rules while spitting on the #peasants below him.

In light of his recent breakup with Kourtney, there's no denying both Scott and Joff are hated television figures. Since Joffrey was assassinated by poisoned wine at his own wedding, we guess it's a good thing Scott is so scared of commitment… but about that drinking problem, hmmm.