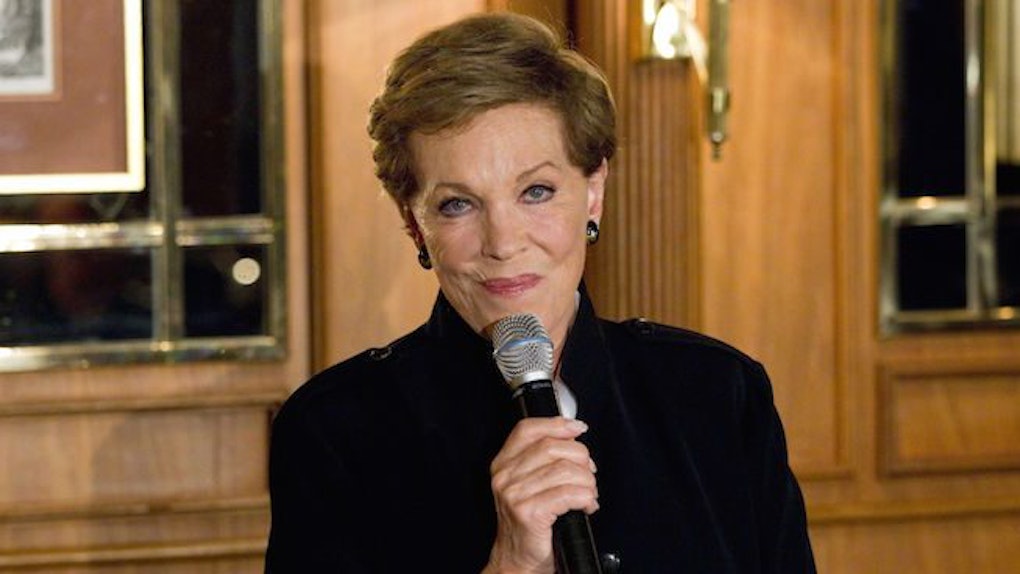 The 81-year-old actress has brought a level of grace, talent and poise to the arts since "Mary Poppins" premiered in 1964 that is irrefutably unmatched.

Andrews, alongside her daughter Emma Walton Hamilton, recently teamed up with Netflix to launch a new series titled "Julie's Greenroom."

The show has a "Sesame Street" quality and co-stars a gaggle of Jim Henson Company puppets playing Ms. Julie's students, all of whom seem to send positive messages of diversity, acceptance and confidence.

The show also hosts a series of talented guests, including Josh Groban, Idina Menzel, Ellie Kemper and Alec Baldwin, among others.

I got the chance to speak with Julie Andrews and Emma Walton Hamilton about their new show, their advice for young women and the extreme importance of incorporating the arts into mainstream education.

Julie Andrews' work, both on and off screen, has helped raise generations of strong, empowered women. With that in mind, it was difficult not to ask Julie for her advice to girls who may be struggling to find themselves in today's society.

With a smile, Julie said, nodding her head,

I have one answer... for me, when I've least expected it, an enormous opportunity or stroke of luck or something has crossed right under my nose and I didn't realize it was coming and I didn't know it was going to happen... So I say to everybody: If you're passionate about what you do and if you love to do it, do your homework, because you never know when the opportunity to move on or see something is going to happen, you just don't in life. Life knocks you about and pushes you over boundaries and through boundaries but be ready. Do your homework.

Julie Andrews' roles, whether it be Maria or Queen Clarisse Renaldi, have so clearly endured the test of time. When asked what she attributes her everlasting success to, she said,

All the films that I've been lucky enough to be asked to do have been family friendly. They stick around… they're not dark and they're not box office for the time being, they have survived and they are shown on television, and that's just where I'm so blessed. That's I think part of it, that it's just the exposure of wonderful musicals and good writing and directing and family friendly movies, and it's not that I set out to do all that, I was very lucky.

Hearing Julie Andrews attribute her success to "luck" came across just as pure as it sounds absurd to anyone who has grown up witnessing and learning from her talent.

Andrews and her daughter have dedicated great portions of their lives to education -- together, they've co-written 31 children's books.

In today's political climate, the future of American education and its funding is an unsettling topic for many.

Emma, who runs an arts education program through Stony Brook University, commented on the reason she and her mother were so passionate about launching this project. She said,

One of the reasons we wanted to do this show is because we really worry about the fact that the arts budgets are the first to be cut in schools... The NEA [National Education Association] is under threat once again and yet we know that there is no... better way for kids to learn critical thinking and problem solving and communication skills and empathy and tolerance and all the skills we need than through the arts; it levels the playing field in a way that almost nothing else does... the arts really do break boundaries and barriers.

The show, which Julie Andrews described as a "labor of love," is aimed at pre-school level children. I asked the mother-daughter duo how they were able to translate the notion of arts being a great equalizer to the young level.

... We hope parents or grandparents might be watching with their children and, if they are, that they'll get the programs on a slightly different level than the child that's watching, also. It's like when you read 'Winnie the Pooh.' If I'm reading it to my kids when they're young I'm getting it on an adult level and I'm thinking, 'Oh god, Eeyore is funny'... and the adult's getting it but the kid is really enjoying the story and we're hoping somehow people watching the show will get it on different levels... It's really exposure to the arts, all of them, that we're focusing on.

We worked very very hard to make it kid friendly in that way. So things like, in the ballet episode, you know, the boys are worried ballet is just for girls -- so we really wanted to make sure this was going to be a cross-gender show.

At the moment, there is an "anti-arts" sentiment in schools -- something that goes beyond politics and is seemingly halting educators ability to foster an appreciation for the arts at a young age.

When asked specifically about this topic, Emma began by saying,

I think that good art can sometimes be subversive and should be. Good art makes us think and makes us question our values and our beliefs... There's a certain movement to not want people to ask questions or challenge or think too much and I think that's why [this is happening]. Over the years, it's really the arts and the artists who have advanced us as a civilization and as a society. And if you look at the degree to which, let's say Melissa McCarthy as Sean Spicer, has rattled the cage, that's fantastic but of course it's threatening to the people in power...

Julie concluded the interview on this poignant note:

But also, I'm wondering if by thinking that it's not important [and] cutting budgets, you're seeing less and less of it [the arts]... If you're not educated to enjoy the arts, if you're not taken to a concert or you don't hear something beautiful, you don't know what you're missing... Maybe there is a lack [of the arts] and I'd love to see more of all of it.