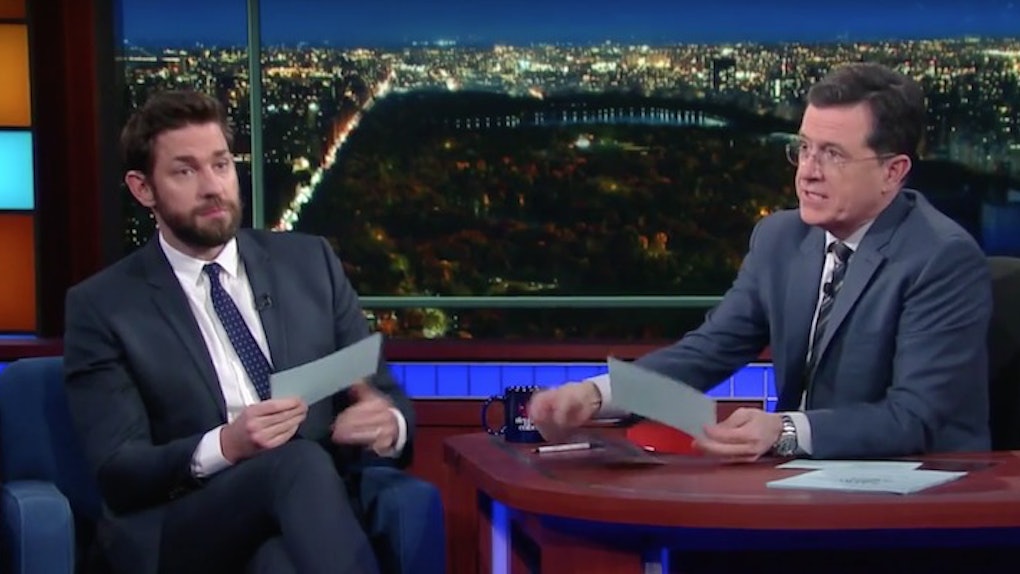 After bulking up to play a Navy SEAL in “13 Hours: The Secret Soldiers of Benghazi,” John Krasinski is officially a regulation hottie (he used to be a regulation cutie which is very different but equally valuable).

Still, some continue to question just how Jim from “The Office” scored an intelligent, hilarious, breathtaking dream girl like Emily Blunt for eternity.

In a clip from a recent visit to “The Late Show with Stephen Colbert,” Krasinski tells the host,

When I met her I was so nervous… She was like 'Hi! How are you?' and I was like 'Pretty good'… I just, like, touched her face and she was like, 'Don't. Don't do that' and then called security and we got married!

When Colbert asks whether the marriage was “a green-card situation,” Krasinski continues,

She now is a citizen, so, oh boy, I hope she sticks around.

Successful spouses know the secret to a long marriage is proving one's value to his or her husband or wife.

Since Blunt already proved herself an expert fake vomiter on a previous episode of “The Late Show,” it's up to her boo to show he can heave with the best of 'em.

Believe it or not, hot, sexy, ripped John Krasinski hasn't forgotten how to fake a decent puke.