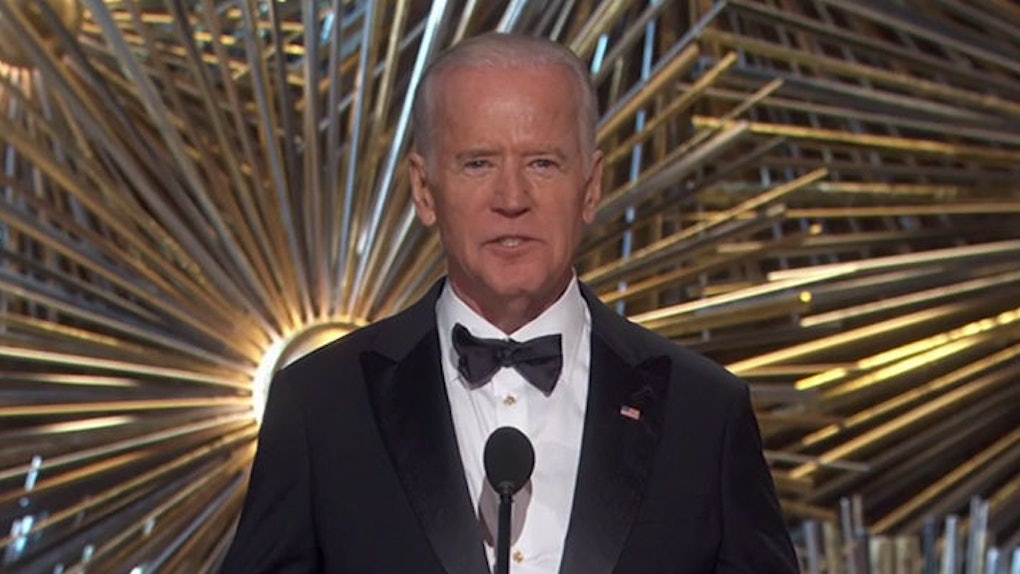 Joe Biden Had The Most Important Speech At The Oscars

Unexpectedly, the most important and moving speech of the 88th Academy Awards came from not Leonardo DiCaprio or even Chris Rock, but from Vice President Joe Biden.

Biden took the stage and delivered a powerful message about consent and sexual abuse. He urged everyone in the audience and everyone watching at home to take a pledge to "intervene in situations when consent has not or cannot be given."

"We must and can change the culture so no abused woman or man will ask themselves, 'What did I do?' They did nothing wrong."

Biden has been heavily involved in changing the behavior towards sexual assault victims since November when he launched the It's On Us campaign with President Obama, which made sexual and domestic abuse a national priority.

His speech at the Oscars on Sunday night was introducing Lady Gaga's performance of her song, "Til It Happens To You," which is composed of lyrics from the point of view of a sexual assault victim. Lady Gaga herself has opened up about her own experience with abuse, and she gave an incredibly moving performance following Biden's speech.

And if you thought it couldn't get more powerful, she was joined on stage by other survivors to a standing ovation. It was honestly breathtaking.

The conversation around sexual abuse in the entertainment industry has been elevated these past few weeks, after Kesha lost her legal battle to escape a contract with her alleged sexual abuser.

Both Biden and Gaga made a powerful point at the 2016 Oscars, and no doubt helped progress the ongoing dialogue about consent and sexual abuse. And for that, I salute them.