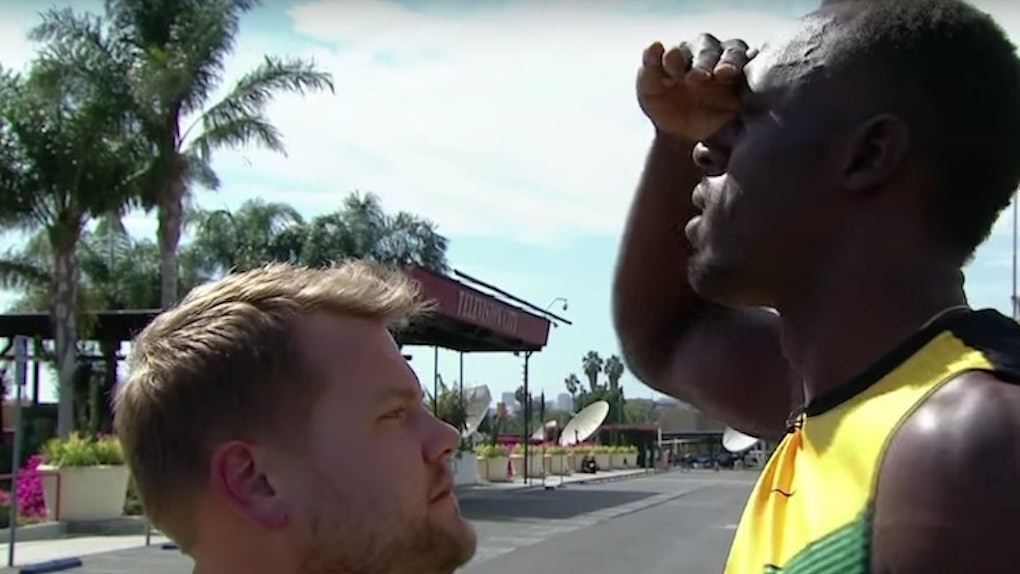 This may come as a shock to you, but James Corden is not faster than Usain Bolt.

Neither is Owen Wilson, and neither is anyone on "The Late Late Show with James Corden" staff.

Whaaaat? I know. Hard to believe, but true.

Usain Bolt, proven fastest man alive and winner of three Olympic gold medals in 2016 alone, beat James Corden, "a late night host who spends the majority of his day sitting," in a race.

On Tuesday, Usain Bolt stopped by "The Late Late Show" to compete in a 100m race with James Corden in the CBS parking lot. Owen Wilson was there, also.

That's not even really the funny part in this video. The funny part is Usain Bolt really seems to take a lot of pride in the fact he beat James Corden and a bunch of late night comedy writers.

Then he interrupts James Corden's post-race interview to bump into him and say,

Based on Corden's little giggle after that shove, I don't think this moment was planned. I think Usain Bolt really is proud of himself for this.

I kind of love that. He is the greatest, why not flaunt it?

I got the start that I wanted, I was leading at the very beginning... I don't know, I got cocky. I took something off, and you take something off against Usain Bolt, he's gonna blow you away. That's what happened, I'm not gonna make excuses. I was mic'd, so obviously that didn't help. And I just flew in from Europe, so, you know, jet-lagged. And I'm nursing a bit of a cold, but you know, I gotta tip my hat to him.