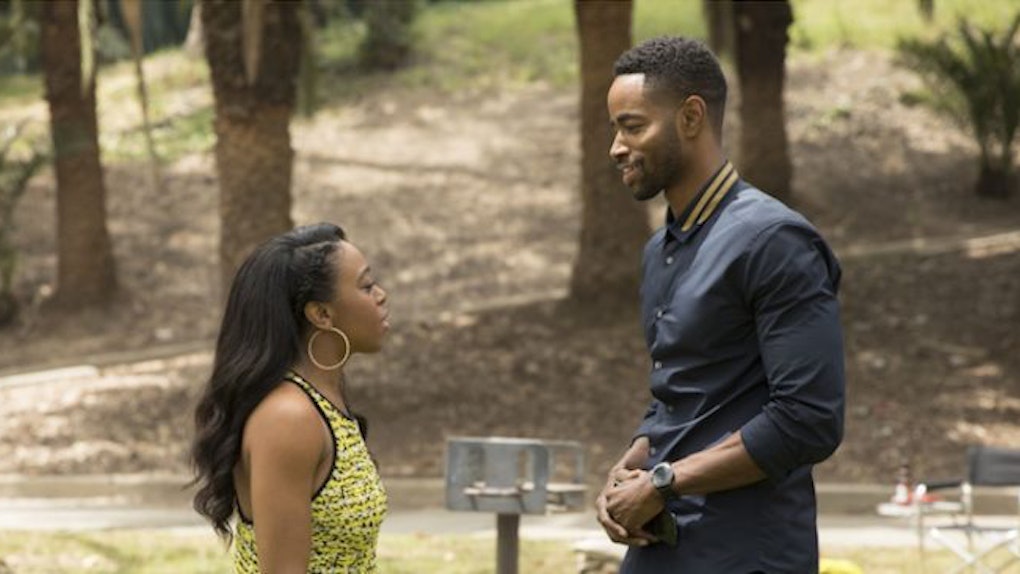 People Are Hating On 'Insecure's Tasha & Here's Why It's So Wrong

Insecure came back on Sunday evening with more drama and way more laughs, but the situation fans can't stop talking about is the fact that Lawrence and his rebound girl, Tasha, are finally on the outs. Lawrence skipped out on Tasha's family barbecue to hang out with his work friends, and Tasha has called him out on his crap. Some viewers are feeling triumphant, since they've been rooting for the downfall of Lawrence and his new bae Tasha since he backed out of making up with his ex-girlfriend Issa to have sex with Tasha in Season 1.

Other viewers are finally glad Tasha wrapped things up with Lawrence, noting that they "don't hate her anymore." The question I have is: Why did people hate Tasha to begin with?

#InsecureHBO i don't know how to feel bout Laurence and Tasha relationship... I mean I don't hate her anymore. But i want him & issa 2getha — Genea mom (@GuerdyY) July 31, 2017

People have been talking about Tasha like she's "the other woman" since Season 1.

In fact, the hate has been so strong for the Insecure character that the actual actress playing her, Dominique Perry, received real-life hate mail.

She said in an Essence magazine interview,

For a lot of women, she [Tasha] represents that side chick or that other woman that ruined a happy home. [But] I really don't feel like Tasha is like that at all. She's just caught in the middle of Issa and Lawrence's situation. I feel like she's just innocent in it all, to be honest. I think she just sees good in him and she just wants to instill some knowledge in him and some self esteem and some confidence to let him know, 'This is just a phase you're going through in life and it will be great. And I would love to walk that walk with you, if you'll have me.'

For clarity, Tasha is not "innocent in it all," as Perry believes. Tasha allowed Lawrence to treat her like a play thing by relegating his time with her to only weekends spent inside of her home having sex. It wasn't until later on, when his friend called him out about how he treated her, that he even took the woman out to eat.

Tasha was also aware Lawrence was fresh out of a relationship, and likely, should not have moved forward with him for anything other than sex. Yes, I wrote "other than sex," since there is no wrong in two consenting adults who are both single (which Lawrence was) deciding to just have sex.

Where Tasha went wrong was knowing she wanted something more than Lawrence agreed to provide. They never even had a "what are we" conversation, which is emotionally irresponsible when you're spending that much intimate time with someone, in my opinion.

The only wrong Tasha has done has been to herself, however, much of the hate she's received is due to fans being so attached to the main character and Lawrence's ex-girlfriend, Issa. Lawrence ran to Tasha's bed after he broke up with Issa for cheating on him, and that doesn't make Tasha an infidelity accomplice.

In fact, Tasha invited Lawrence out on a date before knowing he had a girlfriend, and once he told her he was in a relationship, she backed off. Isn't that how we want people to react when they try to holler at someone and find out that person is taken?

The person who has been doing wrong to people across the board? Lawrence.

#TeamLawrence, it's time to acknowledge some crucial things. First things first: Yep, Lawrence was cheated on. Issa was wrong for cheating. Still, as his homeboy acknowledges, the demise of his relationship with Issa was both of their doing.

Lawrence was with Issa for five years with no job, which means Issa was carrying the bulk of the financial weight in their relationship. He was also so mentally occupied (you know, with his busy no-job-having life) that he forgot his girlfriend's whole birthday (you know, the person who has been taking care of him for five years). He forgot the day she was born and didn't have a card, confetti, or a $3 tray of cupcakes from Wal-Mart to celebrate with her.

Issa checked out after Lawrence checked out. It doesn't make her cheating right because she should have left him, but it also doesn't make Lawrence innocent. When you stay with someone for five years with no job, you're taking advantage of their kindness and their stability. It's a deplorable act, and yes, Lawrence went and found a job eventually, but that was only after he realized that not having his crap together had already killed off something special in their relationship.

Now that he and Issa have broken up, he's continued his f*ckboy ways, with the most shining example being how he left Tasha's family barbecue to go hang out with his other work friends.

Lots of people on Twitter put too much stock in that family invite. Tasha may not even be the kind of person who feels like allowing someone to meet their family is a big, meaningful step. Not everyone considers a family introduction to be a deep thing. It's possible Tasha invited him because she just felt like it would be a fun time for her to hang out with her family and her potential bae at the same time. It's not deep for everyone.

And even if Tasha did invite Lawrence with some added expectation, Lawrence accepted the invite! What decent person accepts an invite to any event, shows up, and then just leaves out with no explanation? To add insult to injury, Lawrence kept assuring her that he was returning, but never did.

That's trash behavior no matter what kind of relationship you have with someone. If my homegirls did that to me, I would be reconsidering my friendship with them. This barbecue fiasco isn't a case of Tasha being wrong for inviting Lawrence, but instead, the perfect display of how Lawrence has some deep character flaws that he needs to work out. It felt hella empowering to hear Tasha tell Lawrence off by saying,

Why couldn't he simply tell Tasha he had something else to do and wouldn't be able to come by? Better yet, why couldn't Lawrence merely say he felt like meeting up with her family was too far? That wouldn't have been hard. It's not like he hadn't been only keeping time with her in the house, anyway.

Lawrence has been playing in grey areas with both Issa and Tasha.

Sure, these women should move smarter and not allow him to play with them, but that doesn't absolve Lawrence of responsibility here. Knowingly playing with a person's feelings, let alone two people at the same time, is wrong no matter how you look at the scenario. Just because a person would allow you to slap them doesn't mean you should take that liberty just because it's there. It's time we stop placing the blame only on Issa for cheating and unjustifiably on Tasha for not being the love interest we like the most.

The fact that so many people hate Tasha, especially those who admit they have no reason, just shows our society still isn't ready to fully hold men responsible for their trash behavior. Since we already live in a culture that scrutinizes women's choices more than men's, it's easier for people to redirect their negative feelings toward Tasha instead of admitting Lawrence's new job was only step one of him getting himself together. He hasn't taken any other steps to become a better person.

#TeamLawrence, take this L. It all belongs to you; not Tasha.