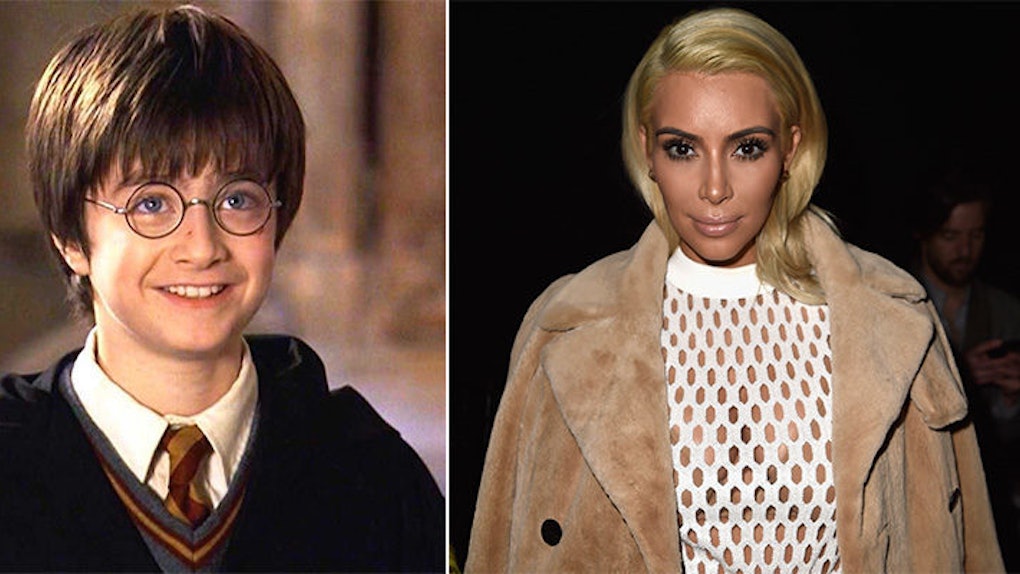 All I'm saying is if Kim Kardashian West isn't a Slytherin, I don't know who is.

The Sorting Hat quiz on Pottermore, an interactive website with supplemental "Harry Potter" content, is finally back after being taking off the site last year. And most importantly, it's way easier to do now!

The quiz was written by JK Rowling herself, as is everything on the site, so you know this sh*t's legit. You have to make an account to play, but I recommend trying it to see which of Hogwarts' four houses you would be sorted into: Gryffindor, Slytherin, Ravenclaw or Hufflepuff.

Now me, I got sorted way back in 2011 when I stayed up all night to get on the beta version of Pottermore. I'm a Ravenclaw, but who cares about me? This is the perfect opportunity to sort the Kardashians.

I'm here to serve the people, so I have taken it upon myself to embody some celebrities in order to sort in their honor.

You may not agree with me on all of these, but JUST HEAR ME OUT.

Only a Slytherin would have the ambition and cunningness to build an extremely lucrative career by just being good at public relations. Could someone from any other house make millions on an app starring herself?

Plus, she's mad loyal to her family.

Khloé's never afraid to speak her mind or take fashion risks, and she has mad muscle from all the time she spends at the gym. Bravery and brute force make her a total Gryffindor.

And, yeah, she's loyal to her crazy family, but she doesn't take anything too seriously.

Kanye is publicly honest in a way that gets him in trouble. He's daring and rash: He tweets whatever he's thinking, as Wiz Khalifa learned recently.

Even though he's ambitious AF, he's not nearly as cunning as Kim when it comes to the press, which is what I think separates him from the Slytherins.

First, I'd like to clarify I think Hufflepuffs are probably the best students at Hogwarts, so this is NOT meant to be an insult to Selena. #PuffPride

To me, Selena seems genuine and kind. She was thrown into the crazy life of a child star on Disney Channel but came out smiling. She's true to herself and to others by being open about her struggles.

Plus, she's barely stopped working since she was 10, which makes her a true Hufflepuff.

If you watch any of the comedy written by Amy Schumer, you know she's smart as a whip.

But it's not just about smarts in Ravenclaw; it's about valuing wit. Amy built herself a career on her wit, and although there are some Slytherin tendencies in there too, in the end, she has to be a Ravenclaw.

Also a toughie, but the cool confidence Beyoncé exudes at all times just screams Slytherin to me.

She's never rash. Instead, she makes careful, intentional career moves like going solo from Destiny's Child and dropping a surprise album. And, she did it all because she knew she was talented enough to pull it off.

She's the queen, and she knows it. #Werk.

That "Carpool Karaoke" with James Corden was the most Hufflepuff thing I have ever seen. Adele is emotional in her songs, but she seems so incredibly kind to everyone she knows and so genuine in every interview. She's Hufflepuff all the way.

She's fierce, brave and basically fearless. For her, it's not about doing what anyone else wants or expects for Rihanna, it's about speaking her mind. Sounds like a Gryffindor to me.

Gaga's art is just that: art. You see in her style she's a lover of all things experimental. She's like one of those super smart art students you knew in college, but were too intimidated to talk to.

Also, trademarking her own lyrics? That's the trademark of a true Slytherin, my friends.

Citations: The Pottermore sorting quiz is back and better than ever (Mashable)