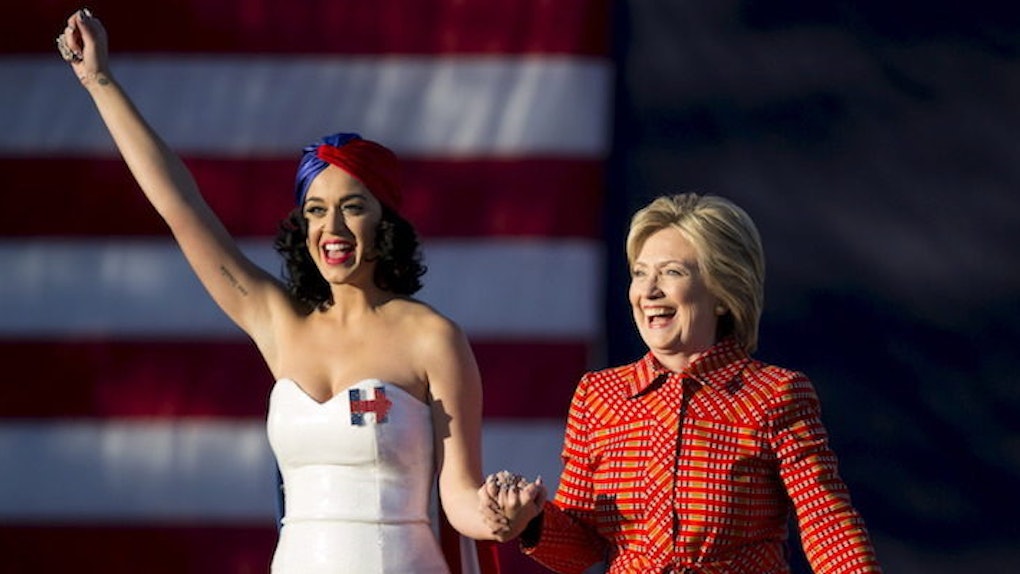 A failed campaign isn't enough to keep these two apart.

Hillary Clinton showed her love for Katy Perry after the singer won an award at a UNICEF gala in New York City on Tuesday night.

The former presidential candidate surprised the superstar by presenting her with the Audrey Hepburn Humanitarian Award.

She gave the singer a glowing review in her speech. Clinton said,

On a personal level, I cannot tell you how delighted I am to be here to help celebrate a global megastar. I have seen Katy's commitment to the causes she believes in firsthand. I've gotten to spend time with her and I know how deeply she cares about making our world a better place. She is serious about understanding the complex problems we face and pulling people together to solve them. We need champions like Katy now more than ever: her passion, her energy and, yes, her voice, louder than a lion.

KP, who won the award after she helped raise more than $1 million for UNICEF, couldn't help but massage Clinton's ego as well.

These guys were side-by-side for most of the presidential campaign trail. KP was one of countless female celebs who endorsed Clinton at numerous public events.

They actually look like proper BFFs. I'd die to have one of these girls in my life.

Can we just enjoy this throwback of Katy Perry dressed as Hillary Clinton for one second?

She got dressed up as the grandmother for Halloween and went to a party alongside boyfriend Orlando Bloom. She had a Bill Clinton and a Donald Trump on hand.

It was scary real. Judging by last night, Clinton appreciated the detailed costume.