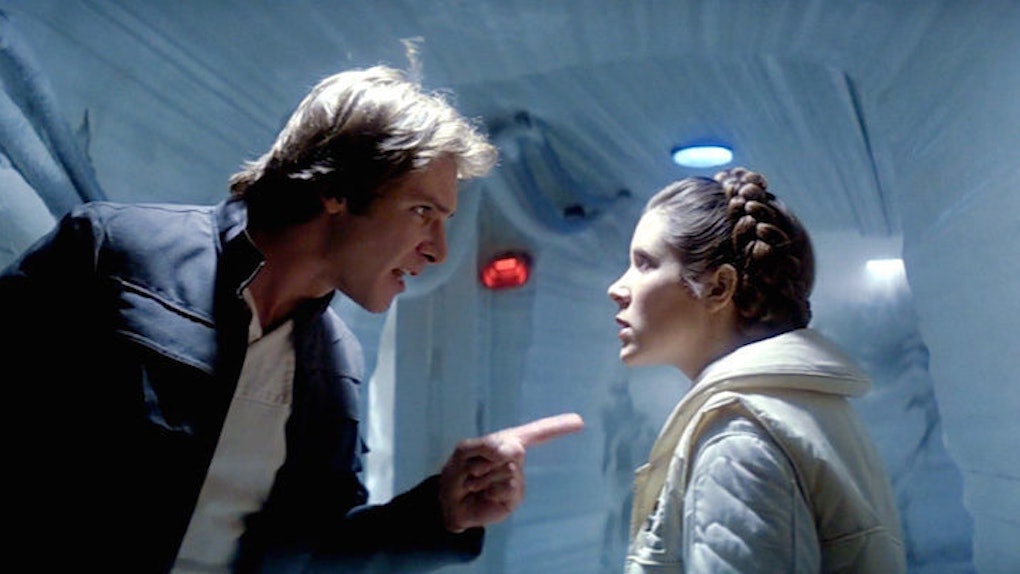 My dad is a "Star Wars" nerd. Not in the meme-posting, lightsaber-collecting way, but in the old school, adorable dad way.

Once, I complained to him about a series of failed relationships -- all with male actors -- and he very seriously quoted, “These aren't the droids you're looking for.”

Naturally, over Thanksgiving weekend, there was a bit of a "Star Wars" marathon at my parents' house.

As trickle-down fanaticism is less of a thing than its economic counterpart, I spent most of "Episodes IV" through "VI" appraising Instagram posts and watching Snapchat stories like a goddamn Millennial.

I did, however, pay attention a few times. Specifically, all the times when Han Solo gave zero f*cks.

Plus, Harrison Ford circa 1977 was hot. Like, more than I remembered hot.

He was also a dick.

Intentionally, to everyone, all the time. Which is probably why I found him so hot.

He is particularly dickish in the famous scene where Princess Leia confesses “I love you” to Han Solo, and he replies, “I know."

“Why does this feel so familiar?” I wondered. Then it dawned on me.

Han Solo is a f*ckboy.

My initial impulse was to blurt out my new and inspired thesis to my dad. I quickly realized that this was a terrible idea.

My father does not need to be horrified by the term f*ckboy. And also, how to explain a term I barely know how to define?

F*ckboy  is an elusive term the Internet has a lot of opinions on. There are possibleprison slang origins rap lyric mentions and incendiary and debatedVanity Fair articles.

A spiral down the rabbit hole of definitions only confused me more; and I'm pretty sure I know a decent amount of real-life f*ckboys. From Swarthmore's Daily Gazette to Urban Dictionary, no one is really sure what the f*ck a f*ckboy is.

Loosely, I have gathered that a f*ckboy is definitely thirsty, yet proudly non-committal. He is often smug and always does what he wants.

He delights in his f*ckboy status.

This is pretty much Han Solo all the time.

F*ckboys also tend to come with a best bro sidekick, who is usually the one you should actually be hanging out with.

Because my theory is 0 percent scientific, I have compiled retro Han Solo quotes, as well as quotes from modern day f*ckboys to see if they are as indistinguishable as I hope they are:

1. “Sorry sweetheart, I haven't got time for anything else.”

I know this sounds like that dude from Hinge you hung out with for six months before asking if you were in a relationship, but this is actually something Han Solo said to Princess Leia.

Han Solo strikes again. This is his response when Princess Leia denies him, telling him “I like nice men.”

Spoiler alert: It works. (This line has definitely been used by a multitude of nonfictional f*ckboys as well.)

Not Han Solo. This was said by a modern day f*ckboy.

4. “I think you just can't bear to let a gorgeous guy like me out of your sight.”

Not Han Solo. This is a quote by a f*ckboy who named his son Saint, Kanye West.

As a technicality, I feel like C-3PO was a robot and yet also was easily offended, disproving Kanye's theory?

Not Han Solo. This is a real life f*ckboy named either Dan, Alex or Marty who Nancy Jo Sales interviewed for a Vanity Fair article entitled, Tinder and the Dawn of the 'Dating Apocalypse

Dan, Alex and Marty probably all hooked up with a girl who resembled Han Solo after The Hunt, participated in Santa Con, and are swiping right in line for “The Force Awakens” as I type this.

7. “Why are you following me? Afraid I was gonna leave without giving you a goodbye kiss?”

Han Solo, the ultimate f*ckboy. Presumptuous and arrogant, even to princesses.

8. “Can you help? Not unless you can alter time, speed up the harvest or teleport me off this rock.”

This is a trick question.

When friends asked me, Can we help? I'd say, Not unless you can alter time, speed up the harvest or teleport me off this rock.

I used that line from "Star Wars,” he said.

Because why not? Charlie knows "Star Wars" wisdom is greater than his own.

Han Solo gives the same response as f*ckboys everywhere when asked the question, “What exactlyarewe?”

Was Han Solo the original f*ckboy?

It was probably Warren Beatty. Or Lord Byron. Or Genghis Khan. Or Adam, the first man.

Is Han Solo a f*ckboy?

While I'm still confused by the parameters of the term, Han Solo is definitely not not a f*ckboy. He's some version of one.

That is, until "Episode VI," when Han realizes Luke is Leia's brother and not her side piece, stops being so jealous, and almost dies but then is saved when Leia shoots a man about to kill him.

Then, he is finally able to say, “I love you” back.

Perhaps there is hope after all (if you are a princess who saves lives.)

And what would Yoda have to say about the whole f*ckboy phenomenon?