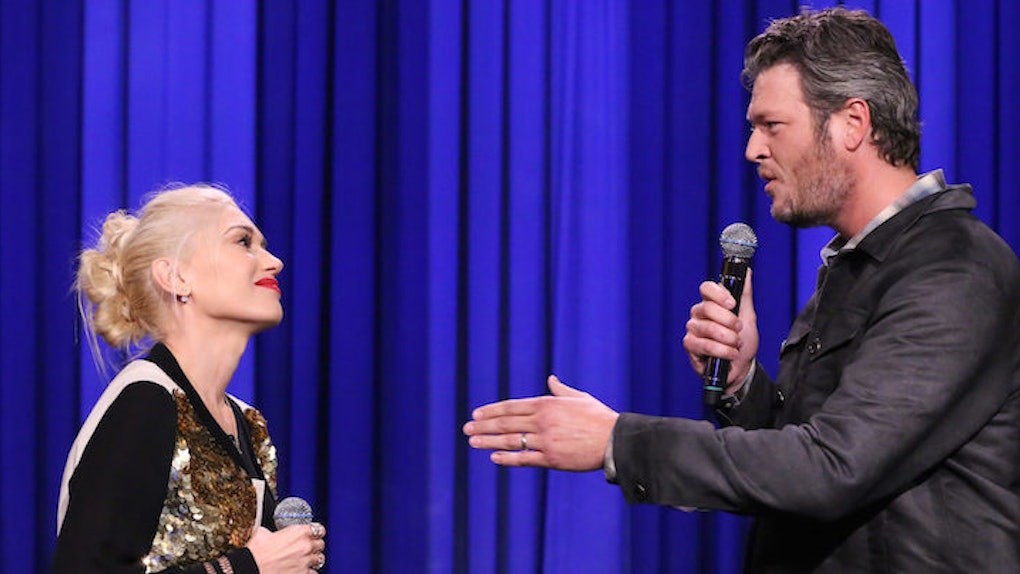 Last week it was confirmed Blake Shelton and Gwen Stefani are officially dating.

CONGRATS, YOU GUYS. SO HAPPY FOR YOU.

Blake split from Miranda Lambert in July, and Gwen ended things with Gavin Rossdale after he cheated on her several times.

Blake and Gwen are on a second season of "The Voice" together, so that must be where the sparks started to fly.

I was initially very surprised, like many others, when I found out Gwen and Blake were dating. They seem like a pretty random couple when you really think about it.

However, as I look back on their relationship, I can't help but see the signs they were in love RIGHT IN FRONT OF ME.

It's been so obvious and I feel silly to not have known.

Let me show you what I mean. Below, check out 14 signs Blake and Gwen were falling in love right in front of us.

After reading through, you too, will feel foolish.

1. Let's start with this crucial day. Back in September 2014, A FREAKING YEAR AGO, Blake and Gwen were asked to Lip Sync Battle with Jimmy Fallon.

HMM, WHY WERE ONLY THESE TWO JUDGES CHOSEN? I wonder.

2. Instead of battling each other, Gwen and Blake surprised Jimmy by performing a duet TOGETHER. Look at the way they're looking at each other. Their chemistry is undeniable.

3. OK, SO BLAKE LITERALLY REACHED OUT HIS HAND TOWARDS GWEN. Blake isn't an actor, you guys. This moment is genuine, he isn't pretending.

4. They are singing a love song to each other, and it's PASSIONATE. Yup, they're feeling each other and you know it.

6. Just look at them holding each other after they finished the song. Look at Gwen doing her little dance and Blake giving her a high five. Love is so real.

7. Now, fast forward to the beginning of this season. During a blind audition, Gwen literally jumped in front of Blake like this. Look at how flirty they are.

8. Look at Gwen throwing her shoes at him. She's flirting with him like a third grader.

She can't contain how much she loves him.

9. Just a few weeks ago, all the coaches of "The Voice" appeared on "The Tonight Show." They each could pick anyone to sing whatever song they wanted, but obviously Gwen picked Blake.

10. OK, and what about when Pharrell picked Gwen AND Blake to perform together?! Yeah, because he knew they were in love.

And do you remember when Gwen literally started shouting "BLAKE! BLAKE! BLAKE!" because she was so excited to sing with him?

11. It's just so obvious. They performed "Hotline Bling" and Gwen changed the lyrics to say "Cowboy" in them, as if she was singing to her one true country love (AKA Blake).

12. And then, all the coaches lined up with Jimmy as he concluded the show. BUT LOOK. DO YOU SEE GWEN AND BLAKE EMBRACING EACH OTHER IN THE BACK?

They can't keep their hands off each other. GET. A. ROOM.

13. We should have known Pharrell was the third wheel here. WE SHOULD HAVE KNOWN.

14. We should have known Adam was the third wheel here. WE SHOULD HAVE KNOWN.

Gwen and Blake, we couldn't be more happy for you. We also are super excited to watch you lovebirds flirt it up every week on "The Voice."

Hopefully Adam and Pharrell won't mind too much.