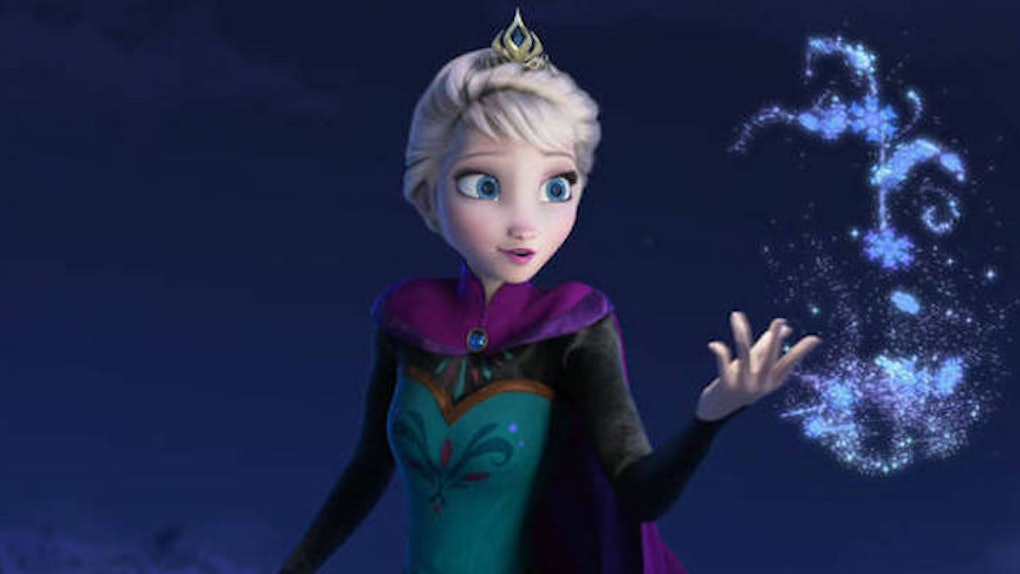 Can you think of a recent film that has left a bigger impression on young girls than Disney's "Frozen"?

You can't escape it, and believe me, I've tried. Last Christmas, my 5-year-old cousin refused to take off her Elsa dress even to go to Mass. That's impact if I've ever seen it.

And, ensuring I will definitely be hearing "Let It Go" for the next five Christmases at least, Disney has a "Frozen" sequel in the works for 2018.

Since there's probably no way to stop that, some people on the Internet thought, "Hey, this movie is basically crack for little girls. Maybe there's a chance to make a big difference here."

A campaign on Twitter started to make Elsa, one of the few Disney princesses who doesn't get a boyfriend at the end of the movie, the first LGBT princess.

Before you cry, "Not everything has to be gay!!!" please remember literally no other princesses are gay.

The hashtag going around is #GiveElsaAGirlfriend, and everyone has some pretty good points.

This is a chance for LGBT youth to feel accepted by one of the most popular movies of all time.

#GiveElsaAGirlfriend because LGBT kids deserve to know that there is nothing wrong with them — jeffrey marsh (@thejeffreymarsh) May 1, 2016

Representation of LGBT characters matters so much more than many people realize.

#GiveElsaAGirlfriend because kids need to see people who are like them in the media. — rabbit stepdad (@DoggParkk) May 2, 2016

hey @Disney, give us a gay Elsa! Young queer kids need someone to look up to!!#GiveElsaAGirlfriend — feminist gals (@feministgals) May 1, 2016

And not all parents are teaching their children the right lessons.

#GiveElsaAGirlfriend so little kids will know that girls loving girls is normal even when their parents teach them otherwise. — ✨ (@feminizza) May 1, 2016

Don't start with that "turning our kids gay" stuff, people. That logic does not go very far.

If a gay Disney princess will turn little girls gay how come the mermaid Disney princess didn't turn me into a mermaid? #GiveElsaAGirlfriend — Twitnter is Coming (@OhNoSheTwitnt) May 2, 2016

Ya gotta admit, straight people already have more than their fair share of role models.

Love is an open door. That door should be open to everyone, not just straight people. #GiveElsaAGirlfriend @Disney @DisneyPixar — Annie was queenvives (@bivanessaives) May 1, 2016

The LGBT youth really need this one.

Last year, the director of "Frozen," Chris Buck, made a comment about the sequel that made a LGBT Elsa seem possible. He said,

We will tackle other issues that, I think, are out there today that boys and girls, men and women, are dealing with. I think we're very aware of what is happening in society. I don't think any of us take [them] lightly, even though they can be very funny and entertaining, the messages that our movies have and the influence they can have on young people.

Look, all I'm saying is as a queer girl myself, having a big name LGBT character like Elsa would have saved me a lot of self-hating middle school years.

So even though I'm not sure how many more Olaf jokes I can take, I'm keeping my fingers crossed for Elsa to get that girlfriend.

Citations: People Are Calling for 'Frozen''s Elsa to Come Out (Cosmopolitan)