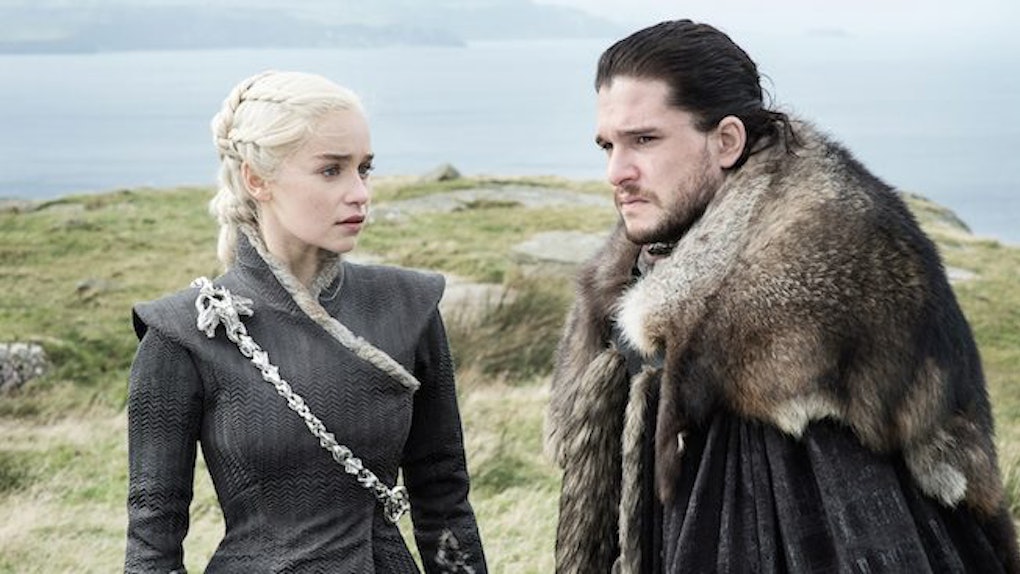 Jon Snow & Daenerys' Relationship Is What 'Game Of Thrones' Is All About, According To George R.R. Martin

The world is a vast and curious place with so many questions and a veritable Pandora's box of open-ended debates. Sometimes it's nice to have answers. Especially when it comes to Game of Thrones. With all the head-scratchers and easter eggs, fans might find themselves asking, what's the meaning of all this? According to George R.R. Martin, Jon Snow and Daenerys' relationship is the whole point. Sort of.

With the Season 7 finale upon us and Season 8 lurking in the near future, we're getting more and more insight into the essence of the epic drama, and even insiders are weighing in on the context of Dany and Jon's powerful alliance.

Game of Thrones director Alan Taylor spoke to Deadline and spilled a little on George R.R. Martin's early inference that the pair were, indeed, central to the entirety of the story in a way.

We didn't really know what a phenomenon it was going to be, and I think he was being less guarded than we've become since then. Anyways, he alluded to the fact that Jon and Dany were the point, kind of. That, at the time, there was a huge, vast array of characters, and Jon was a lowly, you know, bastard son. So it wasn't clear to us at the time, but he did sort of say things that made it clear that the meeting and the convergence of Jon and Dany were sort of the point of the series.

He also told The Daily Beast,

There's no secret that this is where this is going ... The fact that Jon's willing to now bend the knee to her as the next queen is a huge political step. The fact that they are starting to fall for each other is huge. It comes down to tiny moments and how they interact with each other. They're holding hands and there's this great look where she's swooning and she steps back from it, but it's clear that that's our destination at this point.

His interview with the New York Times revealed that Martin was "quite open about his plans" in back Season 1. "He said something: That it really is all about Dany and Jon."

Whether you ship this couple or the idea of it makes you feel queasy, we now have some idea as to how truly integral the union was from the beginning.