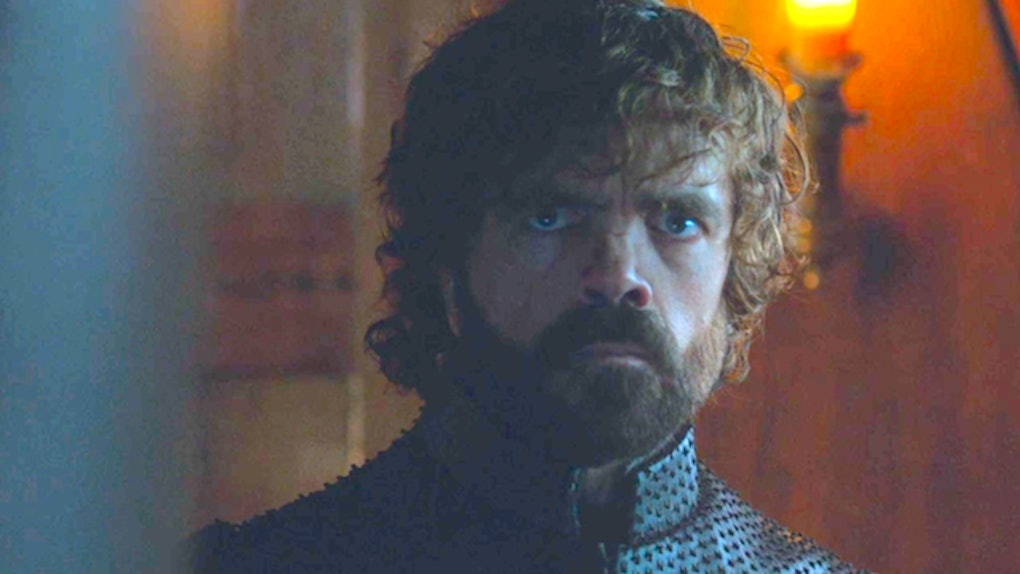 'Game Of Thrones' "Creepy Tyrion" Theory Shut Down By The Director

The Season 7 finale of Game of Thrones wrapped up a bunch of the show's storylines, but there's one that scene that still has fans confused. The last time we see master strategist and Daenerys Targaryen's right-hand man Tyrion Lannister, he was staring worriedly at Dany and Jon Snow banging it out. Tyrion's concerned face spurred a lot of fan theories, but according to the director of the episode, the two most popular theories that fans have latched onto are totally off. Director Jeremy Podeswa told the Daily Beast the Game of Thrones theories about Tyrion's final scene are reading into things too much.

Pretty much right after fans saw the surprisingly worried face Tyrion pulled when he saw Jon and Daenerys getting it on, they began theorizing. Two of the most popular theories interpreted Tyrion's face as an expression of guilt or jealousy. Some fans thought the expression meant Tyrion was feeling guilty looking on Jon and Dany's love because he had actually made a deal with his sister Cersei when he was alone with her earlier, and he knew that she was planning on backstabbing the pair. Other fans thought the pained face depicted romantic jealousy, interpreting the look as proof that Tyrion had actually fallen in love with Daenerys in his time at her side.

But the real reason behind the worried face is a lot less shocking than fans are making it out to be, according to Podeswa. Actually, Tyrion is just worried that the new relationship may cloud Daenerys' judgment and throw a wrench in their plans to overthrow Cersei. So no romance or betrayal at all from Tyrion; he's just worried about strategy.

Well I think there's jealousy, but it's maybe not romantic jealousy, in the way that it is for Jorah, for example. I think that for Tyrion, it's more complicated. I think he has a very special relationship with Dany and he really believes in her as a true leader and has invested a lot in her. I think for him, with Jon and Dany getting together, this represents a possible undermining of his position with her and also a monkey wrench thrown into what the master plan really is meant to be around this entire alliance. The way I see it is Tyrion is a bit of a strategist – not just a bit of a strategist, he is a major strategist – and I think now, he can't see where this is gonna go and that's very difficult for someone who is always thinking three steps ahead. The consequences of Dany and Jon getting together are completely unknown. Is she gonna make decisions now based on this new relationship? Is she gonna be able to separate her personal [interests] from the interests of the greater group? What is this going to foretell for the alliance and what they're all meant to do as a united front?

This explanation does fall much more in line with what we've seen of Tyrion's character, who is much more focused on political strategy than romance or family ties. Then again, anything can happen in this show — let's see what Season 8 has in store for Tyrion.