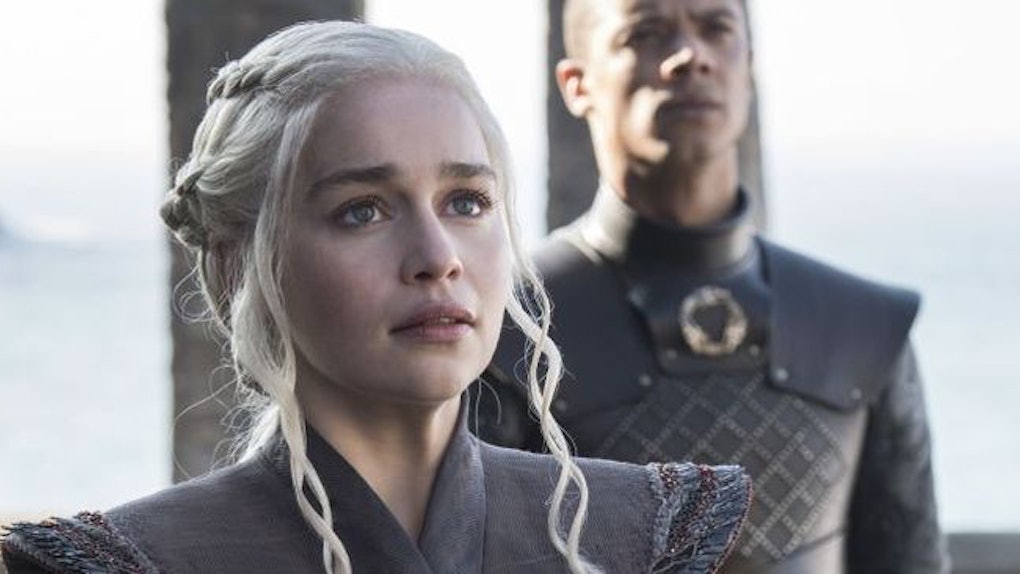 Goodbye, Game of Thrones Season 7. It feels like we hardly knew ye. Suddenly it's going to be all over when the season finale airs this Sunday, and we'll have a least another year (possibly longer) to wait before we get Season 8. But that doesn't mean you have to wait a whole year to go back to Westeros — you can just drown yourself in Game of Thrones Season 8 theories instead!

We know that filming for Season 8, the final season, starts in October, and we know the season will only be six episodes. (Six!) But other than that, we don't know too much. So let's dive into some mostly unsubstantiated theories in the meantime.

Jon, Dany, Arya, Sansa, Tyrion, Cersei, the dragons, everyone. All dead. I would not put it past the Game of Thrones writers to pull this sort of ending. Would I be happy with it? No. But I would not be surprised.

2. Tyrion takes over as the new Lord Commander of the Night's Watch.

A much nicer, more pleasant theory is that Tyrion will take command of Castle Black as the new Lord Commander of the Night's Watch. This theory is brought to you by a Reddit user, who outlined a lot of clues from the books that point to this ending.

Another popular theory is the bittersweet ending: Daenerys Targaryen takes the throne, changes Westeros irrevocably, but dies the tragic hero's death.  Reddit user glass_table_girl made the interesting point that Dany is very similar to Shakespeare's “tragic heroes,” like Macbeth, Hamlet, Othello, and King Lear. George R.R. Martin is a Shakespeare fan himself, so it seems likely he might shape Dany to have the same fate as those characters.

4. Cersei and Jaime kill each other.

So there's this prophecy, the prophecy of Valonqar, from the Song of Fire and Ice novels that states Cersei will be killed by her little brother. Cersei interpreted this to mean Tyrion, but many fans think it will end up being Jaime. Think about it: Jaime knows they are going to lose to Dany, and he also knows her dragons will burn his people to a crisp if Cersei refuses to give up the throne. Fans think Jaime and Cersei will end up killing each other, robbing Arya the pleasure of beheading Cersei.

While fans certainly hope Season 8 will come out in 2018, HBO has said the season could come out as late as early 2019. Ugh. Well, let's just enjoy this new Game of Thrones episode while we still can — this Sunday, 9 p.m. on HBO.