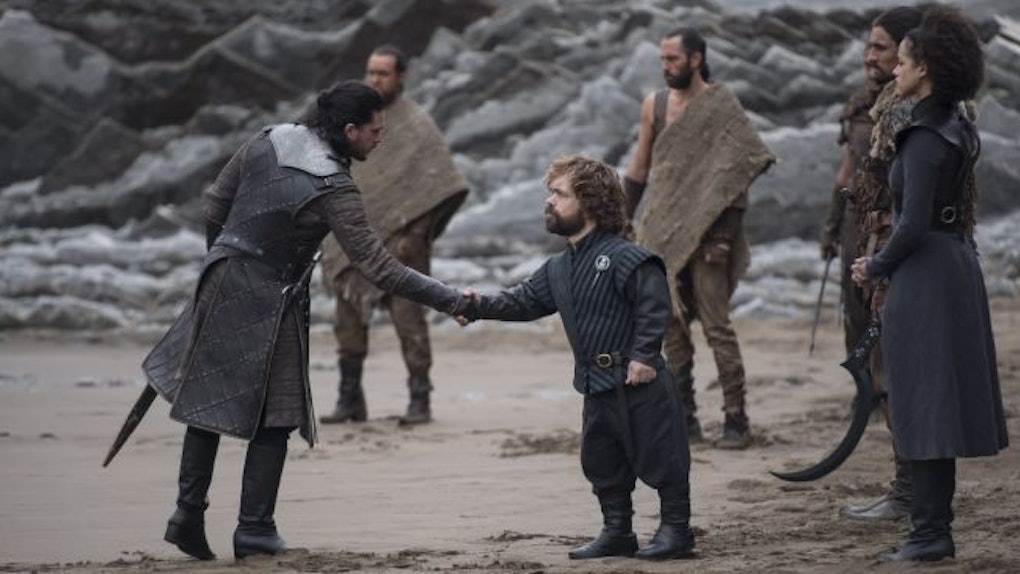 Halloween is right around the corner, and though school may have only just started, it's already time to figure out what you want to do for Halloween. One of the joys of having large groups of friends is the ability to get them together and do group costumes, either for waltzing up and down your neighborhood or if you're too old to get away with that anymore, heading out to parties and impressing all of your friends. And what's more impressive than Game of Thrones group costumes?

Game of Thrones costumes certainly look hard to do on screen, but as we've explained in other posts, even most of the expert level costumes are more about the wig or a specific item to make the look work. And once you get a group together, everyone else's look reinforces each other, so even if you don't have to best Dany wig or a cloak with a deep U shaped curve in front like Arya Stark, you can still impress those around you.

So what are some of the best group costume ideas for Game of Thrones this year? We've got four from the season that just ended this summer, plus one from every season past for your group to ponder trying.

This is one that needs a base of at least two-three people, with Sansa, Arya and or Bran. If you need more you can start adding in those around them, Brienne & Pod, Littlefinger, Lyanna Mormont. If you have a squad of four girls, instead of Sex and the City, you can do the Women of Winterfell: Sansa, Arya, Brienne, and Lyanna.

The core here needs at least four: a Daenerys, a Tyrion, a Missandei and a Grey Worm. Extended groups add in Varys and Jorah first, then Olenna and Yara/Theon, and finally Sand Snakes. If you've got a very large group you can even throw in a Dothraki or two, and a couple of Unsullied as well.

You can have as little as two and just do Cersei & Jaime, but we recommend going for four to add in at least Bronn and The Mountain, if not Qyburn and Euron. Bonus if you have enough people to do a Tycho from the Iron Bank deep cut or the Tarlys who are not Sam.

If you have seven guys, it's a no-brainer to do the group that travels North of the Wall: Jon Snow, Jorah Mormont, The Hound, Tormund, Gendry, Beric Dondarrion, and Thoros. But try for an eighth so you can include a Left-Behind Davos.

A side note: if you have a really big party and you have three other groups also doing group costumes, you can always suggest everyone doing the characters from each of these factions who turn up at the Dragon Pit council. For the record that's three foursomes and one twosome:

Major bonus points if you time your arrivals for maximum party impact.

You could also dress up as groups past:

This one is great for a large family group with kids of all ages. The Starks, when we first met them, were a steps and stairs family of five kids, plus Jon Snow, you can also add in Theon for an extra if needed, and then flesh out the Winterfell household with Maester Lewin and Old Nan if there are grandparents who want to join in.

Season 2: The Best of the Baratheons

The show never had all three Baratheon brothers on screen at the same time, but if you add Robert's ghost drunkenly making Renly and Stannis miserable all night, you know it'll be a hit. Bonus that this group includes OG Margaery and Loras looks, Davos in dressed-down mode, Shireen and her books, as well as Melisandre's most summery red outfit, and a shirtless Gendry fretting about being tied to a bed.

Daenerys at her most motley ragtag band of ass-kickers. Season 3 is post Qarth, pre-Meereen, when she had her Dothraki band surrounding her, plus Jorah and Barristan by her side, as well as Grey Worm and Missandei, and OG Daario with the long hair. Bonus that this is Dany's famous blue dress with riding pants year, which is her easiest outfit in all seven seasons to replicate.

Season 4 episode two was the Lannister zenith: All three Lannister siblings were in King's Landing, all three of Cersei's kids were alive and well, Tywin presided over all. Brienne is there for Jaime, Sansa is there to pair with Tyrion, Bronn and Pod haven't left yet, and bonus, you can do Margaery's amazing wedding gown, Loras in wedding finery and Olenna with her poisoned jewel.

If the Lannister collapse came at the end of Season 4, then the fall of the Tyrells is Season 5. This is your chance to do a group that works in the High Sparrow and Lancel Lannister, and it's also some of the easiest costumes to pull off since everyone except Tommen and Olenna winds up in rags at some point. Even Cersei!

If you're going for Season 6, then best to do the Stark reunion, when they're going about reminding the North. This includes some fan favorites, like Davos holding a charred toy, Jon telling Melisandre not to bring him back, Lyanna Mormont telling everyone she has 62 men, and of course, Tormund and Brienne. Bonus if you can find a couple of people to play Ramsay and Running Rickon.