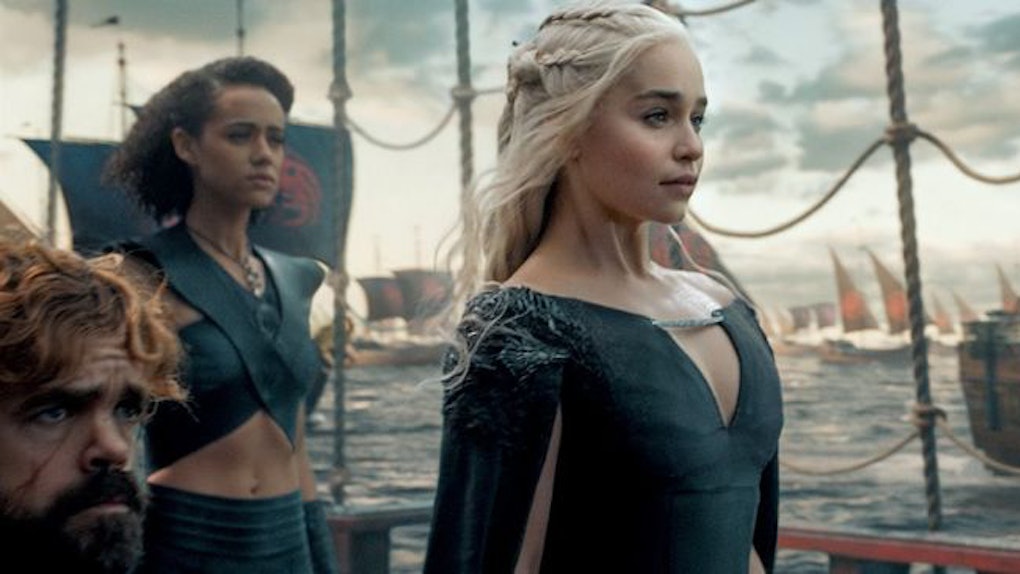 For six long years, Game of Thrones has been a tale of two continents.

There's Westeros, where 90 percent of the action is happening at all times. And then there's Essos, where Daenerys is stuck, far across the Narrow Sea, without even a cell phone, a wireless connection, or an owl to tell her what's happening back home.

But, at long last, this season Dany will return home to Dragonstone, her ancestral home, and attempt to do what she's been promising since Season 1: take back what is hers with fire and blood.

How did we get here? Sit down children, let me tell you a tale, a tale of a mighty Queen. She is Daenerys Stormborn of House Targaryen, First of Her Name, Queen of the Andals and the Rhoynar and the First Men, Protector of the Realm, Khaleesi of the Great Grass Sea, The Unburnt, Mother of Dragons, Breaker of Chains, Queen of Meereen. This is her story.

In the beginning... Dany was a hostage to her own brother (who had Targaryen Madness Syndrome). His TMS led him to sell her off like chattel to the Dothraki Khal Drogo, for the promise they would one day make him king. (Spoiler alert: not happening.)

As a gift at her wedding, Dany received three dragons eggs, which she was told were the real deal, even if they were dead and never able to hatch. Oddly, when she picked them up they seemed warm and alive.

While her brother was miserably following the Dothraki around, waiting for his crown, Dany did the smart thing: She went native. She embraced her new husband, her new life, her horse, her Dothraki horde, and her handmaidens. When she got pregnant, she followed all their customs, including eating a stallion's heart to show her son to be would be strong.

"The Stallion Who Mounts The World," she was promised. Unfortunately, prophecies don't always tell you what you think you hear.

Dany gave birth all right. When she demanded her dying Drogo be brought back to life, she accidentally guaranteed she would birth a stillborn son, while realizing that in return, she'd been given back a zombie husband. It was a disastrous turn of events.

So she did what any sensible person would do: She built the biggest bonfire she could. She put her husband's body on it, along with her dragon's eggs. Then she dragged the witch who had done this to them into the fire, throwing herself on the pyre while she was at it.

In the morning it had all burned away, except for her. She had survived the fire and hatched three baby dragons. Stallions who'll mount the world, indeed.

Season 2: The Arrival In Qarth

While it was great Dany and her dragons survived, her Khal was dead and her Dothraki were leaderless, ripe for conquering. So she walked them into the Red Waste to look for a better way. At the other end, she and the remains of her horde found themselves in Qarth.

Qarth was not the kind city it seemed. Her host was a fraud, the people looked at her like a freak show, and her Dothraki were miserable. But it was a good pit stop to get stronger, and when they left, they took everything that wasn't tied down. (And even some of the stuff that was.)

Season 2: The Visions In the House of the Undying

Before Dany left Qarth, she had a very important thing happen. Her dragons were stolen from her by the elite warlocks, which lead her to the House of the Undying. And in this place, she saw visions of things to come.

Though the show severely cut back on the visions from the books (partly because they didn't want to trap themselves into anything they couldn't follow through on so early), the scene has stuck out. It's a vision that we have seen Bran have as well, multiple times. The Red Keep, with the roof shattered, the Iron Throne, in the snow. Will we finally see this vision play out in Season 7?

Dany spent most of Season 3 on the road to the cities of Slaver's Bay, where she looked to trade for ships and an army to sail to King's Landing. On her journey, she picked up a new knight, Ser Barristan, and she discovered the Unsullied, an army of great renown, but one that was created via a slave system, which she found abhorrent.

At the end of the season, she hatched a plan. The masters wanted her to sell them her dragons for the price of the army. She agreed, knowing full well her dragons would never submit to their new masters. One command of Dracarys, and the Masters were all ashes. Dany had her army, her dragons, and felt pleased with herself that she'd freed slaves to boot.

Season 4: The Conquest Of Meereen & Dismissal Of Jorah

The first half of Season 4, Dany spent conquering the biggest slave city of them all, Meereen. But once she did, she made two fatal mistakes. The first was that she decided to stay and rule.

The second? Upon discovering Jorah, her faithful knight, was originally attached to her to spy on her and kill her for the Baratheons, she sent him away. He was the one trusted friend who could talk sense into her, stand up to her, and advise her. It took two full seasons to recover.

Season 4: Locking Away Her Babies

This is one of the most heartbreaking scenes in Season 4. After raising her dragons and loving them like children, Dany decided, for reasons no one can really fathom, the people of Meereen were more important than her own children or getting to Westeros.

It was a sign of just how badly off course Dany had become, and how much she was losing herself and her mission. Stuck in the land of pyramids and masters, she lost herself and locked away her own dragons. I still can't watch this scene without crying.

After locking away her dragons at the end of Season 4, Dany then proceeded to do nothing. No, really.

To be fair, this is faithful to the spirit of the book it coincides with. Though the show had Dany do different things than she does in the book, it amounts to the same thing. A whole lot of treading in place while the events in Westeros swirl, because the show can't have her come back yet -- it isn't time.

We did have a few more enjoyable moments than in the book. For instance, Tyrion made his way to Meereen, and she hired him on the spot. But all the bother of the Meereenese politics and marrying Hizzy de Shizzle, or whatever his name was before he was toast, didn't matter. The only thing Dany did of consequence in Season 5 was get the hell out of dodge in the finale.

Season 6: Conquest of The Dothraki

Upon leaving Meereen, Dany was immediately captured by a new Dothraki horde, and it turned out they knew who she was. As the widow of a Khal, it was their opinion she was supposed to go to the Vaes Dothrak, where the widows of Khals live out their days.

But Dany wasn't going to go quietly into that good night. She told those Khals they could follow her, or they could die. And when they laughed, she killed them all, with fire. Their Dothraki hordes all became hers. She was truly Khaleesi now.

While in Westeros, Winter arrived and the ice Night King cometh, over in Essos it was all fire, all the time.

When Dany wasn't burning Dothraki, she was burning Masters and retaking control of Slaver's Bay (now renamed Dragon's Bay) once and for all. Turns out having a Dothraki army and three dragons makes conquest pretty easy.

Season 6: Across The Narrow Sea

After six long years, and promise after promise Dany would sail to Westeros, it was finally time. Yara Greyjoy brought ships enough that, along with the Master's fleet, Dany could pack up her posse and head west. Hers is a motley crew. Team Targ currently includes Dornish allies, the last living Tyrell, the sane half of the Greyjoys, the Unsullied who are left standing, three dragons, and a whole hell of a lot of Dothraki.

Will it be enough to take Westeros?

And more importantly, will it be enough to face down the Night King once she does?