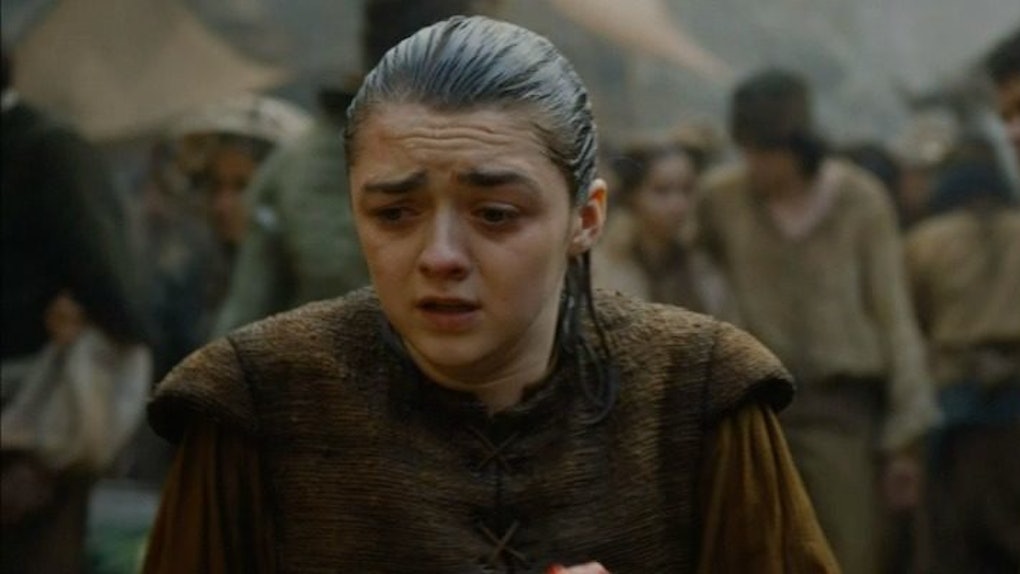 Consider this opening sentence your obligatory warning this post obviously contains spoilers from the latest episode of "Game of Thrones."

Now that we have that out of the way, get ready to sink your teeth into the latest crazy-yet-way-too-plausible fan theory regarding everyone's favorite little warrior, Arya Stark.

On season six, episode seven of "Game of Thrones," Arya appeared to get stabbed multiple times by the Waif. While she was technically still alive by the time the credits rolled, it certainly looks like Arya's time is up.

However, this is "Game of Thrones" we're talking about, and I just refuse to believe Arya Stark has no further part to play in the wars still to come. Obviously, a lot of Twitter and Reddit users feel the same way.

According to this theory, it appears someone was definitely following Arya as she walked through the streets of Braavos clutching her stab wound.

If you look closely, it appears this dude in blue appears more than once in that harrowing scene from episode seven.

Who is this guy?

Well, according to Reddit, this dude could be Olyvar, Petyr "Littlefinger" Baelish's spy, brothel runner and prostitute from previous seasons of "Game of Thrones."

If you follow that theory, it's plausible Baelish sent Olyvar to check on Arya, knowing somehow she was with the Faceless Men in Braavos.

There's also the possibility this dude in blue is just another Faceless Man who is following Arya to make sure the Waif succeeded in killing her.

According to the above-referenced Reddit thread, this guy first made an appearance this season in episode five, when Arya sees the play with Lady Crane.

A different Reddit user pointed out we've seen him in another preview for an upcoming episode of "Game of Thrones." There, on the balcony.

If we've learned one thing watching this show, it's everything happens for a reason. We wouldn't keep seeing this blue guy if he didn't have at least some role to play. The fact we've apparently seen him so many times appears to indicate he could play quite an important role in Arya Stark's future.

Citations: Someone is definitely following Arya in that 'Game of Thrones' scene. Maybe. (Mashable), A REDDIT OF ICE AND FIRE (Reddit)