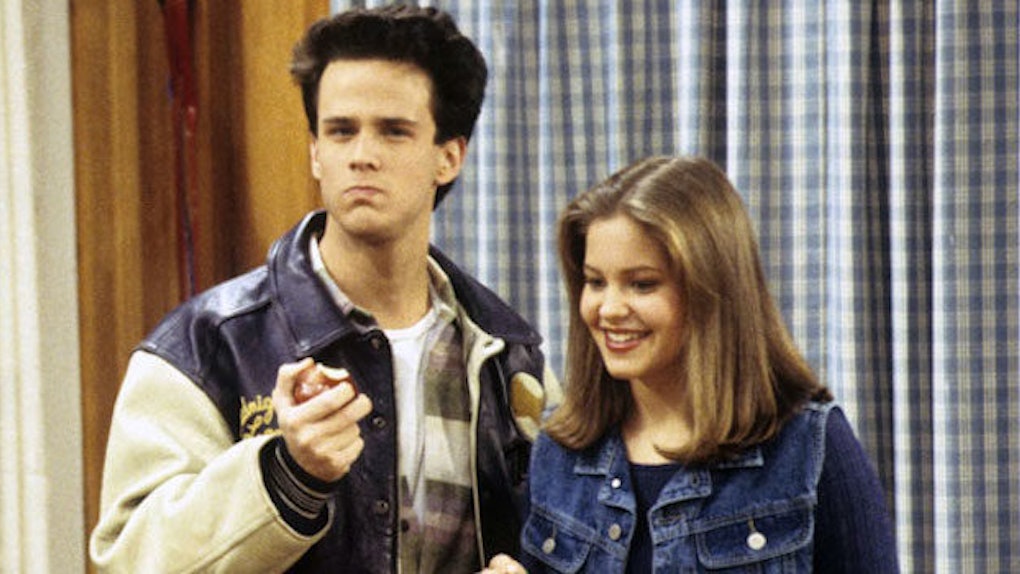 I'd like to argue "Full House" may be the greatest TV show ever made.

I grew up watching it and became obsessed with every episode. To this day, I watch reruns and fall in love with the storylines all over again.

Well, the Netflix lords have blessed us by creating "Fuller House," a spinoff series of "Full House."

We'll get to catch up with DJ, Steph and Kimmy and see what they're up to now and how much their lives have changed. DREAMS COME TRUE, YOU GUYS.

Unfortunately, the Olsen twins will not be joining the cast, so no more Michelle Tanner.

Think about how many random boys were on "Full House." I mean, damn, those girls had their pick.

Below, check out what ALL THE BOYFRIENDS from "Full House" look like today. You'll seriously have your mind blown.

Let's start with the men in DJ Tanner's life.

I'm sure you remember Steve, DJ's lovable (and very hungry) steady boyfriend. They had a pretty long-lasting relationship, so he definitely was the king of the boyfriend pack.

We better see this face on at least one episode of "Fuller House." Please?

Nelson was DJ's rich boyfriend who she dated on and off a few times. He loved money, a lot.

Here's what Nelson looks like now. He's done quite a lot since his "Full House" days.

He's the voice behind several characters for Disney, like Kovu in "The Lion King" and Max in "A Goofy Movie."

Don't believe me? Listen for yourself.

Do you remember bad boy Viper?

He was a guitarist in Jesse's band, Hot Daddy and the Monkey Puppets, and started dating DJ in Season 8.

He ended up dumping DJ because it was too much for him, but then fought for her love by battling Nelson. It was super romantic.

Hubba hubba. You still got that bad boy in you, Vipe?

Now, let's move onto Stephanie Tanner's boyfriends (eh, I use this word loosely).

I forgot about this kid to be honest because he showed up at the end of the season when lots of other sh*t was going down. But anyway, this cutie pie gave Steph the smooch of her life and sparks flew. They didn't really date but whatever, they were feeling each other.

The actor who played Andrew, Will Estes, stars on the TV series "Blue Bloods."

Ryan is that assh*le who stood up Steph one night when she invited him to go to the dance with her. Ugh, boys.

Here is Ryan today. Man, time sure does fly.

OK so Teddy, for the most part, is just Michelle's best friend, but once they hit third grade they try to be boyfriend and girlfriend. Things don't work out (dating is hard, alright?) so the two just decide to be friends.

Here is Teddy today, all grown up. He's now a MAN, pointing at YOU for some love. xoxo

Soooo this is where things get... um, interesting. Do you remember Michelle's first love, Howie? He was Becky's nephew and he starred in the episode called "Baby Love" with Michelle.

Howie came to visit, the two fell in love, but then Howie had to leave and go back to Nebraska. Michelle was heartbroken and it was the saddest freaking thing in the world.

I'm not joking, I can't make this stuff up. In the picture below check out one of the grown-up Howies with some family members.

Here's a throwback photo of the twins together with friends (the first and third from the left). The sisters also starred as Meg in "Knots Landing."

Did that BLOW YOUR MIND?! I can't handle any of this.

Duane was a dodo head and the only thing he ever said was "whatever." He wanted to be a plumber like his dad, who's the "toilet doctor." He also had a cousin named Wayne.

Here's Duane now. The actor who played him is named Scott Menville. Scott does lots of animated voices as well, and is best known for being Robin on "Teen Titans." Here he is posing with a fan.

And here he is actually talking in an interview and responding with more than just "whatever."