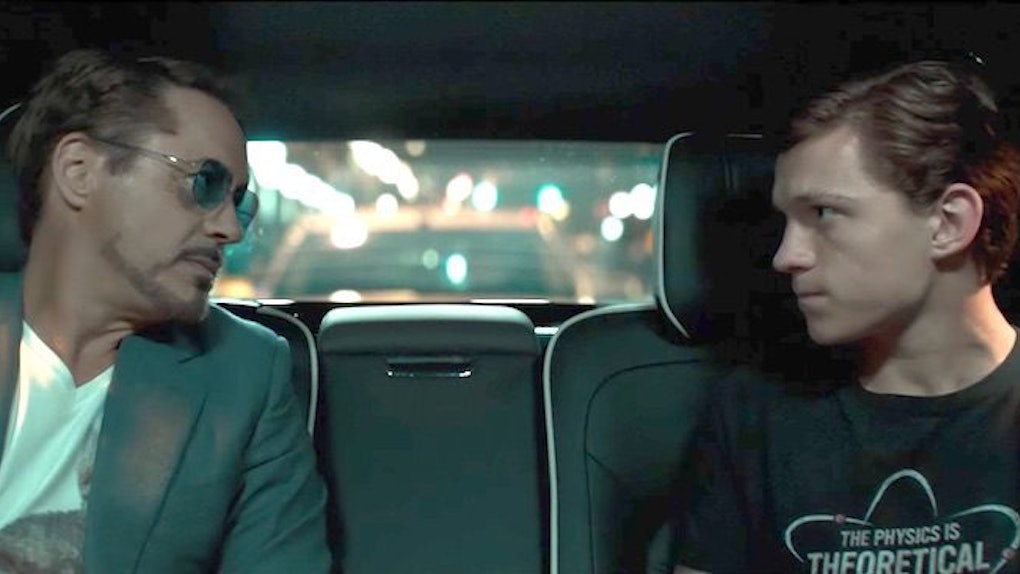 Well, well, well — it looks like someone saw the "Spider-Man: Homecoming" trailer.

So there you are, watching the new Bachelorette episodes when suddenly this not-Tobey Maguire child flips across your screen in the Spider-Man suit.

And wait? Is he talking to Iron Man? Or is it just a coincidence that Robert Downey Jr. is in this movie too?

I know, it must all be very confusing for someone who hasn't been to the movies since 2009.

But don't worry, I'm here to explain it all to you. Your Googling paid off!

So yes, that is Tony Stark you see with Peter. This is not the first time they've met — in Captain America: Civil War (2016) Tony goes to recruit Peter to fight on his side of the war. (Tony told Peter's Aunt May (Marisa Tomei) that he needed him for a "Stark internship."

That was our first glimpse of actor Tom Holland's Spider-Man.

Spider-Man: Homecoming picks up immediately after the events of Civil War, and even starts off with a little montage of Peter's point of view of the big Civil War fight.

Tony drops Peter off back at home, tells him he can keep the suit, and that he'll call if he needs him, and that's that. (Then, of course, Peter gets into all sorts of trouble and Tony gets mad, but you should probably see the movie if you want to know about that.)

So Spider-Man is officially part of the Avengers universe now, as he always has been in the comics!

However, the friendly, almost fathering relationship Tony has with Peter in Spider-Man: Homecoming is a little different from the relationship Peter and Tony have in the comics.

The general idea of the pair's relationship is pulled from their dynamic is played out in 2005's Amazing Spider-Man No. 519  — when Peter moved into Stark Tower, and Tony built him a new suit. But when the Civil War comic book series came around, Spider-Man fought for Team Cap, not Team Iron Man.

Ever since then (and also thanks to some complicated side-plot in which Tony Stark's memory getting erased), the comics versions of Iron Man and Spider-Man are nowhere near the close relationship they now have on-screen.

They're not exactly mortal enemies, but it definitely doesn't seem like Tony will be driving Peter to school anytime soon.