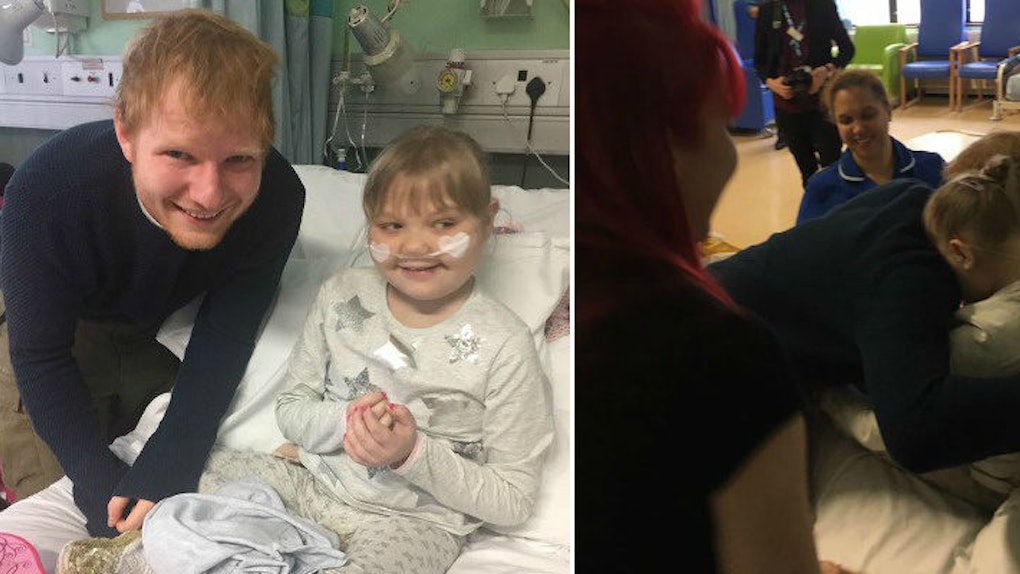 Ed Sheeran Visited A Young Fan In The Hospital

Singer Ed Sheeran went above and beyond when he surprised one of his biggest fans by visiting her in the hospital.

Melody Driscoll, 9, suffers from Rett Syndrome, along with a number of other ailments, but for 90 minutes, she was in a state of euphoria as she was treated to a bedside performance from Ed Sheeran.

According to The Telegraph, Sheeran visited the nine-year-old at Epsom Hospital in Surrey, England, and he performed two hits, "Thinking Out Loud" and "Photograph."

As you can see in the video above, Melody Driscoll was overjoyed by Ed Sheeran's performance, and she was beyond surprised to see him in her hospital room.

Dreams can come true. Melody was in hospital for 562 days and in that time, every time she got in pain, we would have to put Ed Sheeran on to help her through the pain episode. It was the only thing we could do to make her smile.

OK, now I'm really crying. The video above had me sobbing, but after getting a better understanding of just how much this young girl loves Ed Sheeran, well, you get the picture.

According to The Telegraph, Melody's mom claims the Croydon Police department had a lot to do with making the meeting happen. She said,

I was really impressed because he had no press with him, no cameras with him, no management, no security, nothing. It was just him alone. Melody is connected to a lot of machines and a lot of scary things and a lot of tubes. But none of that fazed him at all. He went straight up to her, sat next to her.

It meant the world to me to see her truly happy. The amount she has to go through and we managed to make her one dream come true. I literally owe him my life. He doesn't realize how much he's done for her. There's been several times she has stopped fighting when she has been very sick and we thought we were going to lose her. We put Ed Sheeran on and she starts fighting back. It just goes to show that dreams can come true and miracles can happen. You just have to keep fighting for them and she does.

You're a good dude, Ed Sheeran.