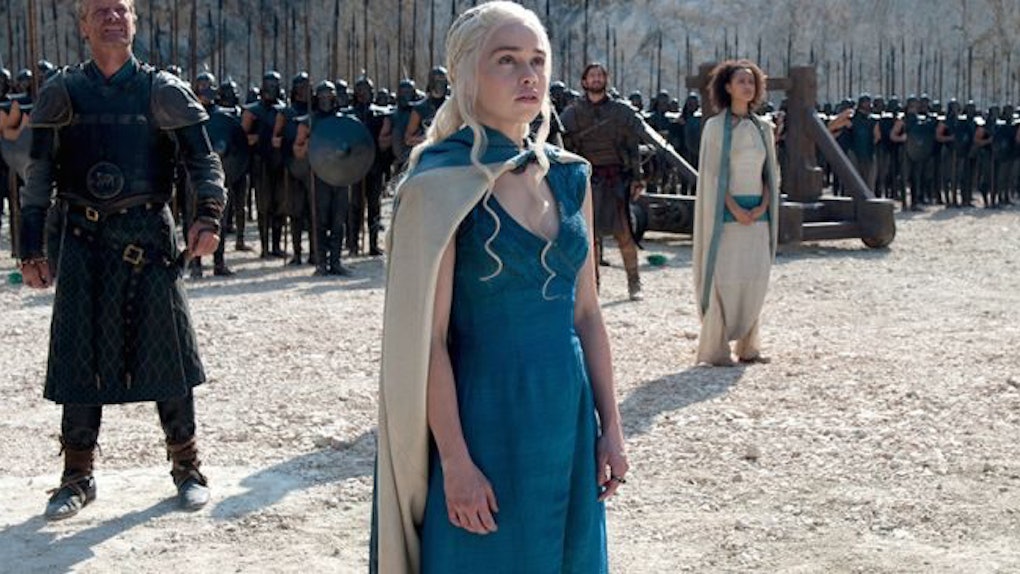 There are so many Game of Thrones characters one can dress up as for Halloween. From Cersei and her new mop top to Arya's Faceless styles, this is the time to break out your Westerosi finest. But if there's one character more recognizable than any other from this show, it's the woman who believes it to be her destiny to rule the Seven Kingdoms, Daenerys Targaryen. Want to be the Mother of Dragons this year? Let us break down all the best DIY Daenerys Halloween costume ideas for you.

First things first though: the hair. Or rather, the wig. Yes, it's a wig. It's always been a wig. (Emilia Clarke is brunette.) Nailing the wig is paramount -- a good Daenerys costume with a crap wig is going to read as a crap Daenerys costume.

Don't try and dye your hair this color and do it yourself. There are plenty of inexpensive Daenerys wigs to be had on Amazon, which will run you from $20-40 depending on which shade of platinum blond silver you want, and how much hair you want to play with. We highly recommend buy one, and then styling that wig to match the look you're going for, rather than attempting to do your own. You'll thank us later.

On to the outfits!

Daenerys wedding gown is the simplest wedding gown of all the weddings in Westeros. It's grey chiffon, with a halter strap around the neck, a single metal circle pinning the bodice and two silver armbands to pin the train to. Here's the video for the hair tutorial. Don't forget your eggs.

This one looks like a strapless top, but there's a green strap around the back of the neck to hold what is basically a scrap of fabric kerchief. It's just under the hair. Though the bottom looks like a skirt, it's really pants. Green baggy camo pants tucked into boots will totally work here. Here's her dressed up braided hairstyle.

Daenerys, First of Her Name

Once out of the desert and widowed, Daenerys' first outfit in Season 2 in Qarth is a cosplay favorite. And why not? It's basically a draped blue chiffon fabric with some gold, painted-on schmutzing and a big filigreed gown belt and shoulders with some beaded accessories, which you can buy on Etsy. It's so easy, you can buy the whole outfit if you want for $100. The key to Qarth hair is your crimper.

Daenerys' two other Qarth outfits are basically the same one in blue (shown) and one in pink. Both aren't actually dresses, they're long tunics over brown skinny pants, with a flap that tries to hide the divide. The real trick is to get the gold filigree or leather versions of her armor neck piece. Those can be found on Etsy.

Daenerys most famous outfit, the one she wore to freee the slaves. Her blue tunic is over brown skinny pants again, and boots, with a cream and blue cape. There are several variations on Etsy. As always, here's your hair tutorial.

Daenerys' other super easy draping outfit. You can basically make this out of a white silk sheet if you wanted. You just need the neck piece and a wide brown belt. Oh, and a dragon. Here's the hair video.

Another popular one, but this one you don't see as often because it's harder to pull off the criss-cross bikini style bodice. But if you have a blue bikini top and long skirt, all you need is straps of fabric and some pins. Also, one of the few non-braided hairdos.

Daenerys, Protector of the Realm

Daenerys has three versions of this dress. The Season 4 versions are blue scaly fabric over a white pleated skirt. (The other one has a keyhole, instead of a sweetheart neck.) The Season 5 version is white-on-white. The white one is easiest, because the scales are larger, and you can just pleat fabric and get the same sort of look. But if you can find a blue bodice like that at your local renaissance faire, go with this look, and impress your friends. Here's the hairstyle. Don't forget the dragon tooth necklace.

This look could have been made by Tom Ford, it's so clean and straight, Really, a plain white gown, with a bar neckline and a plain white cloak. Dassit. The real trick is the necklace and the hair.

While one could be bedraggled Dany from Season 6, why would you, went you can be Daenerys the Unburnt, in head to toe leathers easily found at your local renn fest? Don't forget the belts on the arm, the half gloves and the braids.

Daenerys' latest look, that she wore to come home this season, is actually a grey mottled version of her Season 3 blue gown, mixed with the pleated underskirts of Meereen. These are already available via cosplay sites. Make sure to add the red fabric on one shoulder (not pictured here) since Targaryen House colors are black and red, and a silver chain belt across the chest. Here's the tutorial for that most impressive ponytail.

Daenerys, Queen of the Andals, the Rhoynar and the First Men

Our last outfit is the fur coat dress. It's a total stunner, and would be even if it didn't recall the Night King's wrinkles in the design. Getting one on Etsy is right out pricey. You have to get faux fur that's white with black striping. The good news is, with large shoulders like that, setting the sleeves should be simple. Again, use a silver chain belt for the accessory. The MEY version (which is the jewelry line made by the actual Game of Thrones costume designer) is in the $3,000 range. Here's the badass braid tutorial. Dragon ride not included.