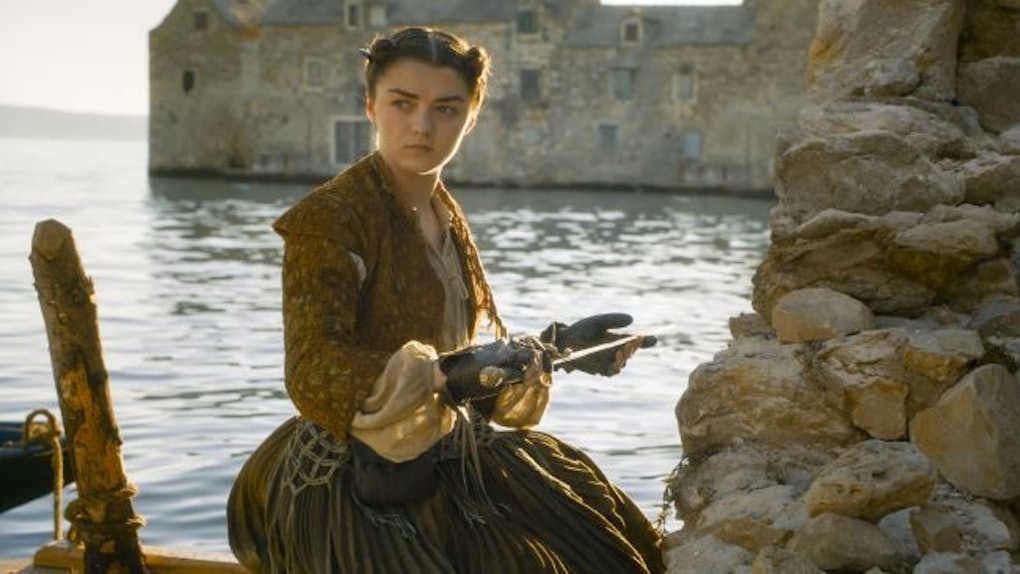 Halloween is not far out, and for those who want to go as something that's not thrown together last minute, now is the time to start plotting and planning. While some might go as the scariest character they can think of, others use this as a time to dress up like their heroes. Superheroes like Superman, Batman, and Wonder Woman. Or ordinary people who become heroes, like Luke Skywalker, Jyn Erso, and Rey. Then there are those who are twisted into strange heroes, like the ones in Westeros. In that spirit, here are 10 DIY Arya Stark costume ideas.

We've lined up ten looks that Arya has sported across the seasons that you can DIY yourself this year. Check it out.

This one is so easy. A metal helmet and a cloak with a fur collar. That's it. If you've got a bow and arrow from a Hunger Games set, accent with that.

Arya's outfit for most of the time she's in King's Landing is an over-sized undyed muslin shirt and boy cut jeans that are rolled up at the bottom, with a pair of ankle boots. You'll deffo need a Needle sword to carry. Braid your hair.

Arya spent three seasons wearing this same outfit. The top is two pieces --a dingy brown thin sweater or henley will work for underneath, and a greenish thicker sweater with a brown belt at the waist over it for the top. For the bottom, the skinny pants are also dingy brown, over ankle boots. You'll need a boy's haircut and a dagger to replace needle.

Arya Stark: A Girl Who Tries

When Arya finally got a new outfit, it was really plain, but hey, it was new. A black dress that's long enough to do a decent fold over the belt, with a white long sleeved shirt underneath. Your props are a broom, or a face.

Quite possibly the easiest, once you get past the white contact lenses. Wrap yourself in burlap and wear brown skinny pants underneath. Carry a bowl and staff. Don't wash your hair.

Arya Stark: Cat of the Canals

One of Arya's more challenging outfits, but not the worst by any means. A long green skirt that goes to the ankles (the knit green netting overskirt is optional.) Add a black belt, leggings and ankle boots. A white poet's shirt and bolero type brown sweater for the top. The hardest part are the pinwheel buns, here's a tutorial.

This is technically the outfit that the Frey maid's wear, head to toe black with a small apron at the waist. The top is a black poet shirt under a black lace up bodice corset with large lapels. Look for something at your local renaissance festival if you want to get something fairly similar. Serve pie.

The green cloak with the large leather brown collar is the hardest part of this outfit. Everything else is designed not to catch attention in brown, brown and brown, except for the black welder's gloves. Tell everyone you're going to kill the queen and then laugh.

The hardest of Arya's outfits to pull off and it's all because of that cloak. It's a stunner, isn't it? But the off center U shape that covers her right chest, but leaves her left side open so she can quickly draw her weapons is a hard one. Honestly, if you pull the cloak off, you can get away with a brown bustier, grey tunic and leggings for the rest.

Arya's final outfit is also hard, especially if you want it to be all leather. It's actually a version of what Robb Stark wears in Season 2 as King in the North. You need a lace up tunic over long sleeved shirt for the top. For the bottom, a long tunic skirt, the sort they sell to men at your local renaissance festival, over leggings and knee high boots. Your sword, your knife and a smile are all the props you require.