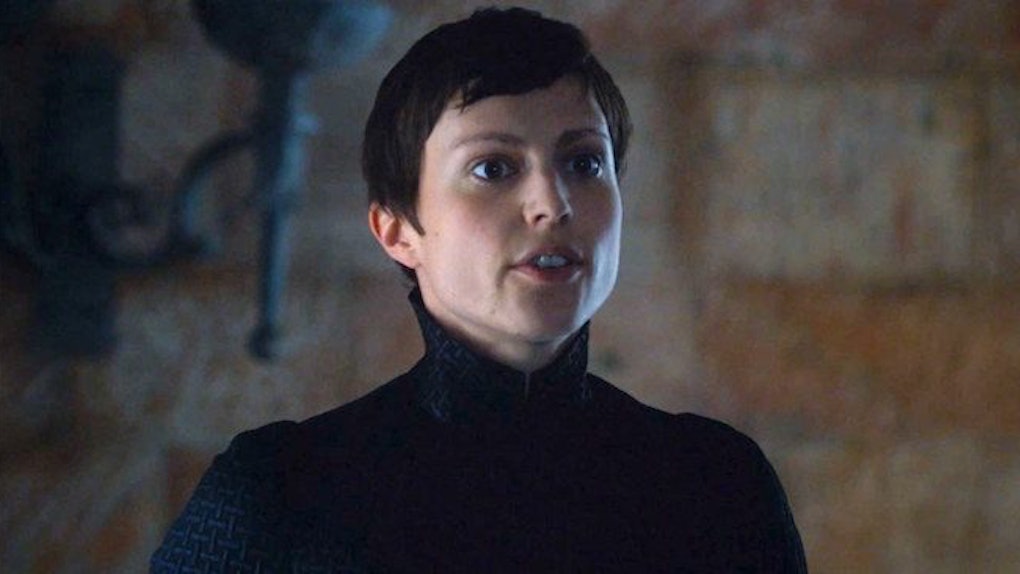 Amidst all the craziness of the new episode of Game of Thrones, you may have noticed a new face who's actually not-so-new. Cersei Lannister's servant pops into her room for a quick second right after the queen has finished boning her brother Jaime, and Cersei is surprisingly completely nonchalant about her flaunting not-so-well-kept incest secret in front of her. Cersei's maid on Game of Thrones may look like a new character to viewers, but she's actually been a part of some of the most pivotal scenes in the show. You just didn't recognize her because she got a drastic new haircut.

Cersei's maid, named Bernadette, has actually been one of the queen's most loyal servants throughout the series. She first popped up in Season 2 as the person assigned to keep an eye on Sansa Stark while she was being held as a marriage-captor by the Lannisters. Ever-loyal to Cersei, Bernadette scurried off to relay all the info she could about Sansa to the queen, including when she first got her period. She also ratted on Tyrion's lover Shae, exposing her to Cersei.

So why don't you recognize her if she's been in so many scenes already? Well, back then she actually had longer hair, similar to Cersei's old 'do. And apparently, being Cersei's fave servant also means changing your hair to always match hers, because now that Cersei is rocking a pixie cut, Bernadette also debuted a short haircut in the new episode.

Interestingly enough, this isn't the first time Cersei's hairstyle has become a focal point for Game of Thrones fans this season. In the season premiere, viewers noticed Sansa had changed up her hair to make it look similar to Cersei's old haircut, and began theorizing it could be signaling a possible turn to the dark side for the eldest Stark girl.

Clearly, Bernadette's Cersei hairdo is a sign of her allegiance to the queen, and now she has even more secrets to hold after seeing the Lannister twincest in action. Although it doesn't really seem like Cersei cares if her brother-boning gets out anymore.