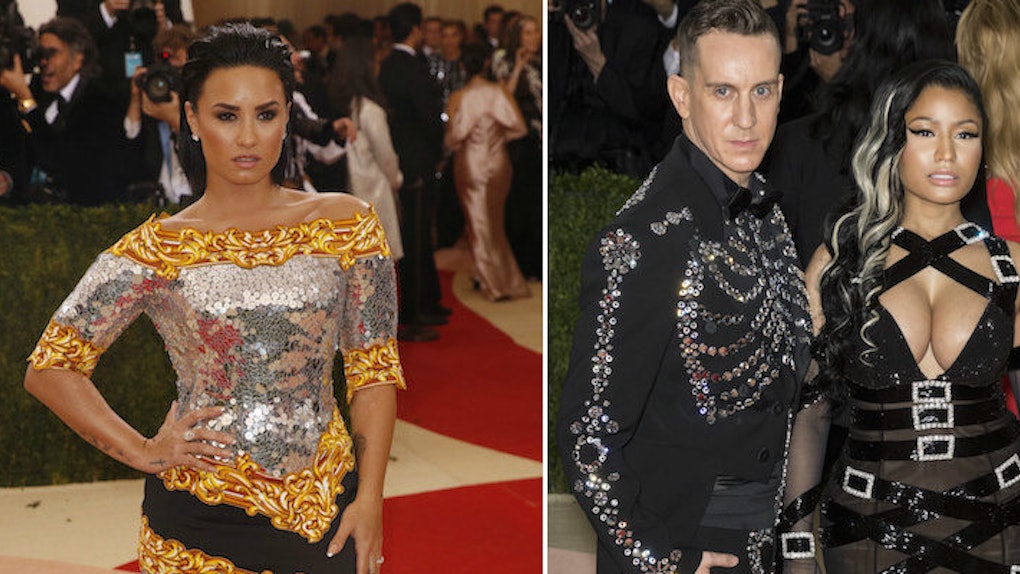 Some weird sh*t went down on Monday night at the Met Gala that we're trying to decipher, and I'm not just talking about Beyoncé wearing the skin of an acne patient to the event.

It all started when Nicki Minaj posted the following picture to her Instagram of her, Demi and designer Jeremy Scott.

Great picture, right? Jeremy is dressed as a party skeleton, Nicki looks like the star of the porn-parody version of “The Matrix” and Demi dressed like the floor of a fancy cathedral in Spain.

This would have been the most innocent post in Instagram history had Nicki Minaj not captioned it with,

Uhhhhh, why is Nicki Insta-snubbing Demi on the tags?

Don't think Demi missed this ACT OF INSTA-WAR enacted against her.

This picture pretty much summed up my first and probably last met #cool #sof*ckingawkward #notforme#sweatpants #forensicfiles #whatsgood p.s. some of y'all need to learn how to take a joke.. I'm obviously laughing at the fact that 1. I look incredibly awkward and 2. That the shade being thrown in this picture actually gives me life

She also posted the following picture to Snapchat.

Here are three bits of information we've gathered to shed some light on the situation.

1) Speculate however you want, but Demi left shortly after this picture was taken and before the gala even started.

2) Nicki is wearing a dress designed by Jeremy Scott, so she may have been trying to get a picture with JUST Scott before Demi swooped on in there

3) Nicki has a history of not tagging people in posts, so this may be entirely unintentional.

Is there actual beef going down? I mean, so far it definitely just seems like Demi is freaking out at an invisible evil Nicki Minaj, but is Nicki really THAT innocent in this?

I'd like to think Nicki is in a lair somewhere puppet-mastering Demi's slow slip into insanity while laughing to herself,

Yessss, yessss, Demi. Dance for me. DANCE FOR ROMAN!