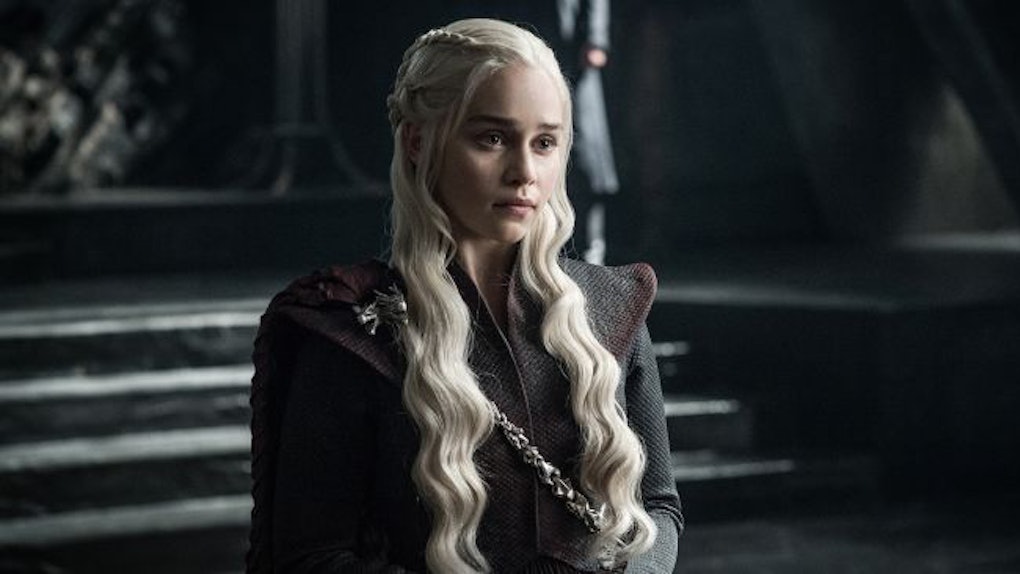 Daenerys' Speech On 'Game Of Thrones' Has Twitter Blowing Up

Sunday's new episode of Game of Thrones gave fans a moment they've been waiting years to see: the Dragon Queen met Jon Snow at long last and definitely made an epic first impression. Daenerys Targaryen gave a speech on Game of Thrones that immediately became iconic. Spoiler alert: this post will discuss details in Season 7 Episode 3 of Game of Thrones, "The Queen's Justice."

When Jon Snow came to ask Daenerys' help in fighting the White Walkers, she flew into an epic speech asking him to recognize her as rightful queen first. Of course, the fiery speech lit up Twitter.

Basically, Jon was coming down to Dragonstone to try to get the dragon glass to ward off the White Walkers, but Dany made it clear she's only focused on getting the Iron Throne. When Jon refused to kneel before her, she gave him the laundry list of trials she's had to endure up to this point, including being sold off in a Dothraki marriage, almost being killed as a newborn baby, and being sexually abused and assaulted time and time again.

All of these horrors led to Daenerys becoming the formidable queen she is today. She let Jon know she's grown to have complete faith in herself, and her rightful place on the throne. Still, Jon refused to pledge his allegiance to her and couldn't convince Dany the White Walkers are real.

Dany's epic speech may not have moved Jon Snow, but it caused fans on Twitter to go wild. Check out some of the best reactions below.

Luckily for Jon, he has a sneaky ally in Dany's right-hand man Tyrion. Later in the episode, the Lannister was able to convince Dany to let Jon mine the dragonglass and be on his way to fight his own battle in the north, while Dany focuses on taking the Iron Throne in the south.

Of course, the downside to this resolution is Dany and Jon are parting ways right after finally meeting. Let's just hope they can team up again soon!