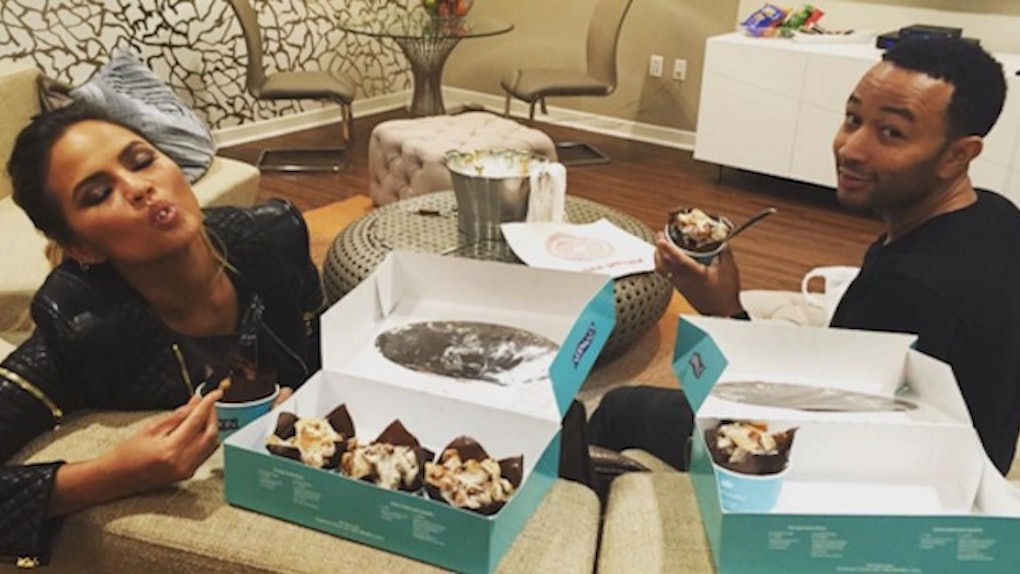 There's really nothing more beautiful than falling in love. At least that's what I assume. I'm uh, pretty damn single so I wouldn't know, but I can imagine it's absolutely wonderful.

I often tell myself I want someone to love me just as much as I love pizza. That would really be the ultimate relationship goal.

When it comes down to it, though, I really think I want the love Chrissy Teigen and John Legend have.

I'm guilty of stalking their relationship on a daily basis (OK, I'm sure you do too) and oh my God, they're PERFECT together.

Chrissy and John have been together for over seven years, but their love still feels fresh and young.

Between cooking together, constantly kissing and holding one another, it's clear these soulmates are made for each other.

If you're in the mood to have serious relationship envy, check out some of their cutest moments below.

I'm warning you, though, some photos are so beyond precious, you may cry. And when I say cry, I mean bawl. ENJOY!

There was that time Chrissy posted these photos of her with John, just to let him know she missed him.

And that time they danced like weirdos but it was OK because they were dancing with each other.

There was that time they danced again BUT THIS TIME WITH A DOG IN THEIR HANDS.

And that time they dressed up as Mario and Princess Peach, making all our hopes and dreams come true.

Let's talk about when John held Chrissy's leg and all of our hearts exploded into millions of pieces.

It didn't even matter when John lost at the Grammys because Chrissy was there to comfort and hold him.

They even cuddled on an office floor together, and it was the most magical thing your eyes have ever seen.

The fact that this photo exists and Chrissy made it when she was drunk says enough.

There was that time Chrissy gave John the most gentle, precious forehead kiss in the history of forehead kisses.

And she Instagrammed pictures of them side-by-side as babies as if they've known each other their whole lives.

How about when Chrissy wrapped her arms around her "baby" and smiled with pure love?

Seriously, when are her arms and legs not wrapped around him?!

Just look at them lying in Miami, having the time of their lives, so hopelessly in love.

Look at her sucking on his little nose.

Look at him staring at her, giving her everything he has.

Here they are literally lying in the grass, just thinking about love.

I MEAN, HOW DO THEY MAKE COOKING LOOK THIS ADORABLE?

HOW DO THEY MAKE FLOSSING THIS INTIMATE?

How am I physically supposed to handle how perfect this is?

The answer is I can't. I CAN'T HANDLE IT.

Love is balancing chicken wings on your butt as bae tries to eat them.

Love is creating the most romantic music video ever known to mankind.

WAIT, I need to elaborate. It was the most beautiful, sweetest thing. It was five minutes of me crying while John sang about how much he loves her. And Chrissy looking hot as hell, like always.

Then, of course, the video ends with their wedding, a special reminder to all of us that love is real.

And finally, there was the time they took this adorable picture and announced THEY'RE HAVING A BABY.

In nine months, they'll not only be the cutest couple in the world but the cutest family as well.