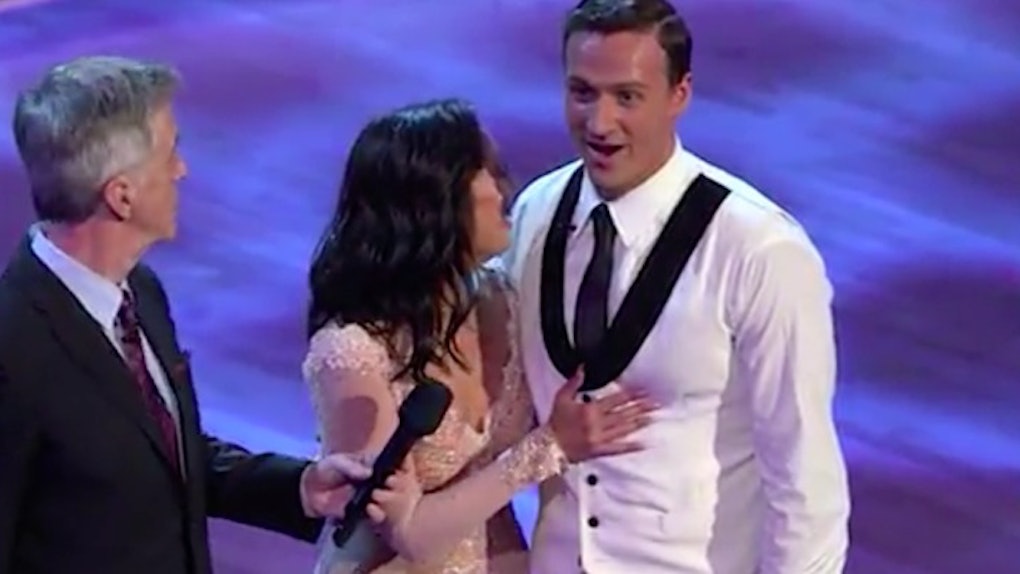 Cheryl Burke said Ryan Lochte looked like he was about to burst into tears when two protestors stormed the stage on "Dancing with the Stars."

Burke gave a first-hand account of what happened when the pair interrupted the show wearing anti-Lochte t-shirts.

Spoiler alert: She makes it seem way more dramatic than it actually was. I mean, the security guard's tackle was pretty dramatic, but apart from that it was just some old geezer walking on stage barely shouting slogans.

My first thought was, 'Is this a joke? Is this scripted and no one told us? Too soon, guys.' But as soon as he started yelling 'Boo! Lochte! Liar! Lochte! I realized it was a serious situation. My mind started racing. My initial concern was if the guy was armed or not. Then I saw Dave – one of our security guys who I've known for years – come in and tackle this guy.

Then she revealed Lochte was about to cry, saying,

I looked up to Ryan and I could tell he was on the verge of tears. I could feel his heart sinking into his stomach – and to be honest, mine was too. They cut to commercial break and I just had him lock eyes with me and I was telling him, 'You're amazing. Don't forget why you're here.'

Poor Lochte (I wish he had cried).

Thank you to everyone for your concern. I'm still trying to process everything that happened last night. My heart is aching for Ryan and his family. No one deserves that sort of behavior directed at them. We all need to love each other and not be bullies or cowards. Let's all just be positive for each other. My heartfelt thanks goes out to the security team at Dancing with the Stars. Love you all, Xoxo Cheryl.

Thanks for blowing this out of proportion, Cheryl.