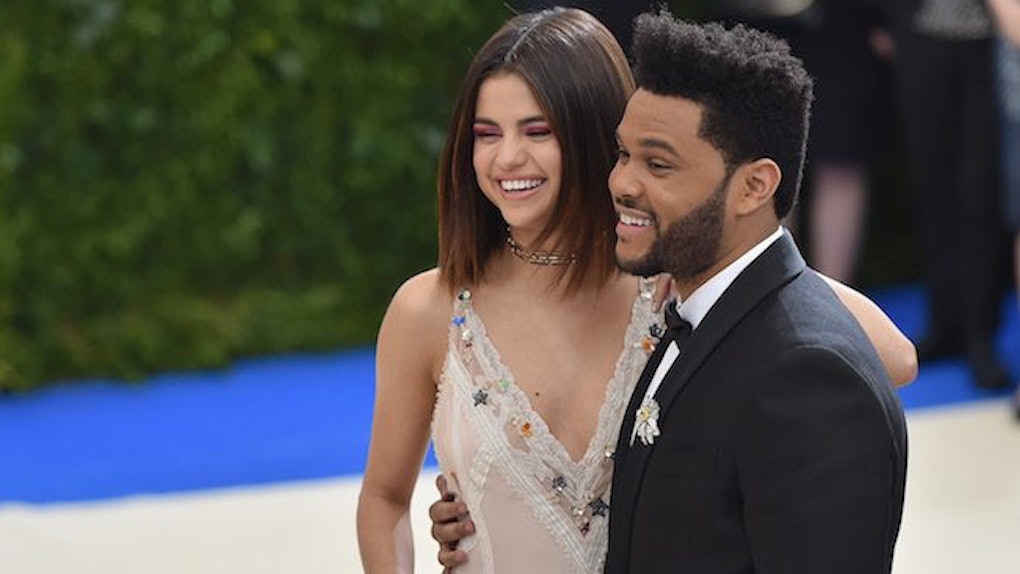 Where's Selena Gomez During The 2017 VMAs? The Weeknd Is Flying Solo

It's pretty obvious that Selena Gomez and The Weeknd are the music industry's cutest power couple, so it's super shocking that they didn't show up to the VMAs together hand-in-hand. In fact, she didn't show up at all. Where's Selena Gomez during the 2017 VMAs?! Why isn't she in the crowd, ready to watch The Weeknd take the stage?

It's strange because Selena and her bae, Abel, usually aren't afraid to show some PDA at public events. Whether they're flaunting their seemingly perfect relationship on international vacations or strolling into an event attached at the hip, there's no denying the fact these two want the world to know how happy they are.

Take the Met Gala, for example. At the beginning of the star-studded event in May 2017, "Abelina" practically owned the red carpet with poses, cuddles, and smiles galore. Now, they're continuously posting swoon-worthy pictures of each other on social media, and we can only wish our own relationships are as cute as theirs one day.

With that being said, it's shocking that Gomez wasn't at the VMAs with The Weeknd. However, she did have a legit reason. According to Elle, she's all the way in New York, filming her next movie, so I'm sure The Weeknd understands.

Gomez is nominated for two awards — Best Collaboration for "We Don't Talk Anymore" and Best Dance for "It Ain't Me" — so we'll have to wait if she gets an award from the other side of the country. The Weeknd is actually nominated for five awards — including the biggest award of the night, Video of the Year, for "Reminder" — and performing at some point during the night. So no matter what, he'll be taking the stage.

Even though Gomez can't be there IRL, I'm sure she's watching to support the Weeknd. And hopefully the next time they're together, they'll both have some wins to celebrate.