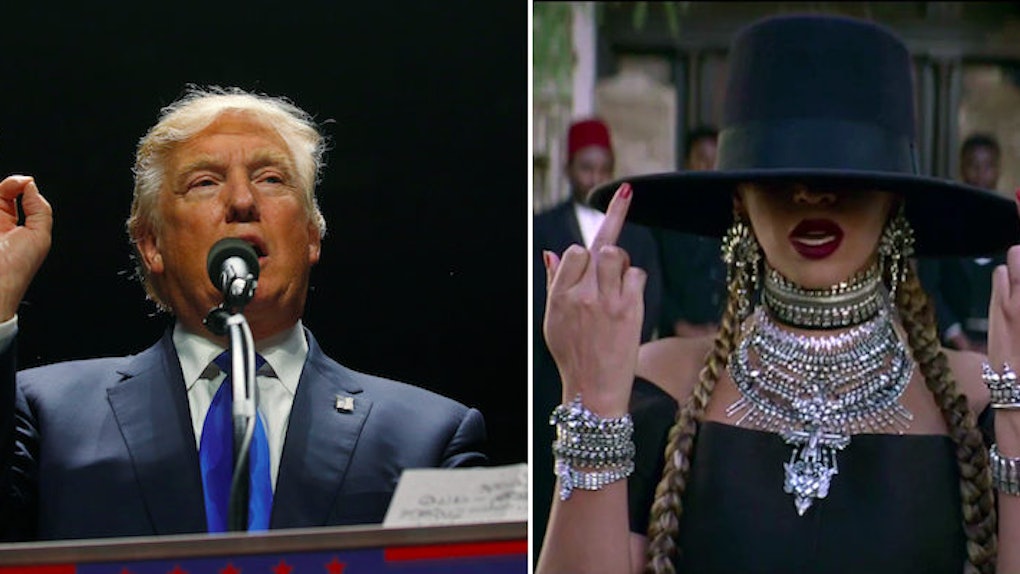 Look, you can pull a Travolta and call Idina Menzel "Adele Dazeem." I don't mind. But what you don't do is ever play with how Beyoncé's name is pronounced. It's borderline blasphemy.

If Donald Trump is wondering why he's hearing a buzzing in his ear right now, someone tell him that he's disturbed the Beyhive. Buzz, buzz, Donald. You've done goofed.

While at a campaign rally in Raleigh, North Carolina, Donald Trump horrifically mispronounced Bey's name. Watch the Vine below, and grab your ears in horror.

EXCUSE ME. WHAT DID HE JUST CALL MY QUEEN?!

Beyoncé and Jay Z recently performed at a free get-out-the-vote rally on behalf of Hillary Clinton on Friday night in Cleveland, Ohio.

Although Cleveland lost the World Series, they totally won this election season by having Queen Bey serenade them in an unforgettable experience.

But one person decided to dishonor the Yonce and her inspiring show: Donald Trump.

In fact, on top of mispronouncing Bey's name at the rally, Trump said,

I get bigger crowds than they do.

To add insult to injury, Donald went on to say that Jay Z and Beyoncé need their mouths washed out by soap.

This is coming from the garbage person who bragged about sexual assaulting women by grabbing "them by the pussy."

But, no! Jay Z and Beyoncé are totally the ones who need their mouths cleaned. Sure, Donald, suuure.

Can you tell I'm being sarcastic? BECAUSE I'M TOTALLY BEING SARCASTIC.

Hopefully, someone will give Donald a lengthy tutorial on how to pronounce Beyoncé's name in the next 24 hours.

All in all, this is the last piece of awful Trump-related news before Election Day tomorrow.