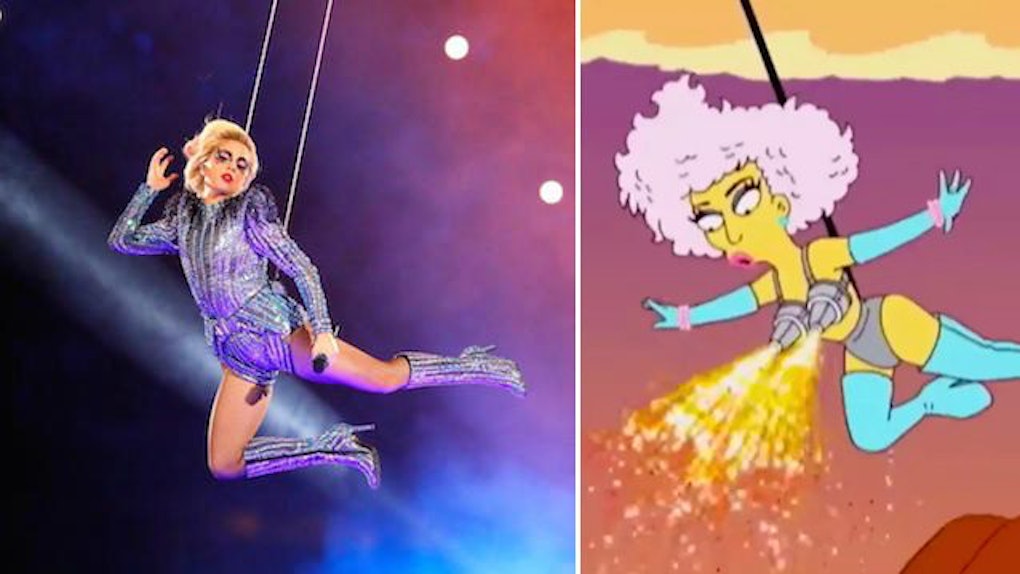 Did Lady Gaga jack her Super Bowl halftime show from "The Simpsons"?

That's the question on the internet's mind today as people slowly decompress from the religious experience that was Gaga's Super Bowl 51 halftime show.

If you haven't seen it yet, here. You're welcome for changing your life.

Take a second to catch your breath. It took me about five minutes, even though I watched it while sitting on my couch.

There's a rule of thumb in the entertainment industry that every good idea has already been done by "The Simpsons," and it's not really an exaggeration.

The show has been on for almost 30 seasons and tends to employ some of the industry's best writers. "South Park" even had an arch about Butters' super-villain alter-ego struggling to prank people because Bart Simpson had already done it.

This means one of four things happened last night:

1) The whole performance was a total coincidence. 2) Lady Gaga is a massive "Simpsons" fan and the whole thing was a touching homage to the show. 3) Art imitated life. The idea was in the ether and Lady Gaga let her attachment to the universe drive the production of the staging. 4) THIS WHOLE THING WAS MEANT TO BE A DISTRACTION FROM STEVE BANNON.

Conspiracy theory nuts will also be quick to point out both "The Simpsons" and last night's Super Bowl aired on FOX.

The internet immediately recognized the similarities the second Gaga took that leap off the top of NRG Stadium.

Maybe "The Simpsons" writers knowingly built this performance before Gaga even knew she was going to be there???

HOW FAR DOES THE RABBIT HOLE GO?

Wanna tell us something, Lady Gaga?