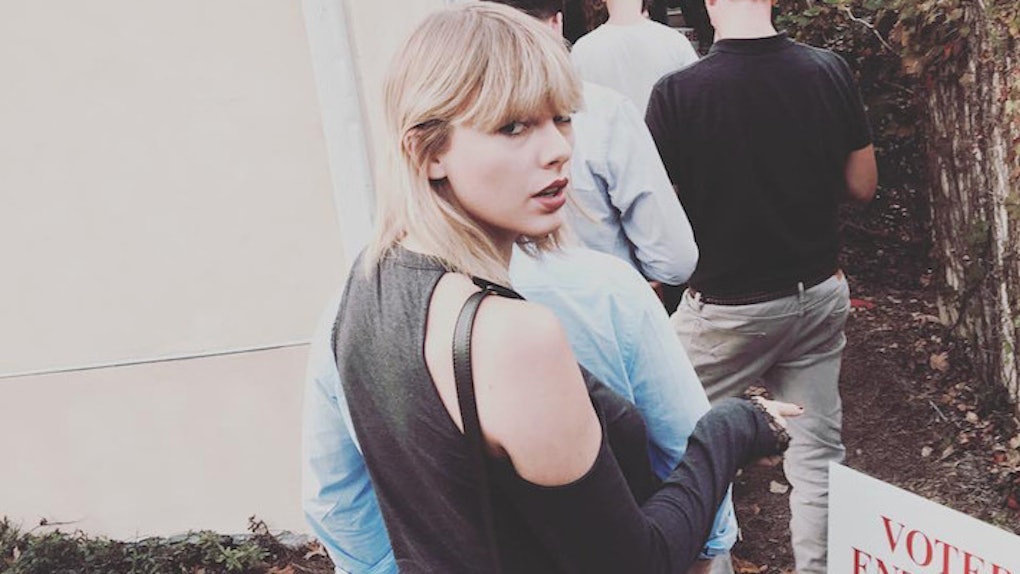 Whether you like it or not, America really cares about who Taylor Swift might be voting for on Election Day.

Data gathered from Google Trends highlights that the 26-year-old singer topped the list of the most-searched person using the question "Who is (name) voting for?"

Other names on the list include Monica Lewinsky, George Bush, Al Gore and Mitt Romney. Instead of ANY of those politicians ranking in first place, Taylor Swift stole the spotlight.

America REALLY wants to know... As a matter of fact, certain tweets out there in the Twitter-sphere suggest that people think Taylor Swift might not even be voting at all.

Well, I'm here to at least prove to you that Taylor Swift has voted just like the rest of us.

While we haven't been given many clues on whether she went with Hillary Clinton, or Donald Trump, just be happy with the fact that T. Swift mustered up the strength to stand in line and take a stand on November 8.

The Pennsylvania native stood in line wearing a pair of jeans, an off-the-shoulder blouse and a purse as she pointed to a sign reading "Voters Entrance." Let's just say she looked SPOOKED.

It's official: T. Swift has voted for the next president of the United States. Sure, she might look absolutely terrified, but she got the job done.

If anything, she's living proof that you don't need to flood your social media accounts with rant after rant about which candidate you're voting for and why. Instead, she played it cool, lay extremely low and patiently waited for Election Day to come around.

When it finally did, she got the job done by heading to the polls.

There's no harm in that!

Since we're not too sure who Taylor Swift voted for, it's only right that we take a close look at who her celebrity friends have voted for...

Lena Dunham is "with her."

Karlie Kloss is "with her."

As for Blake Lively? She's taking the Taylor Swift approach... No one knows!

Now it's your turn, people! If you haven't gone out and cast your vote yet, make sure you do before it's too late. Only voices are heard!