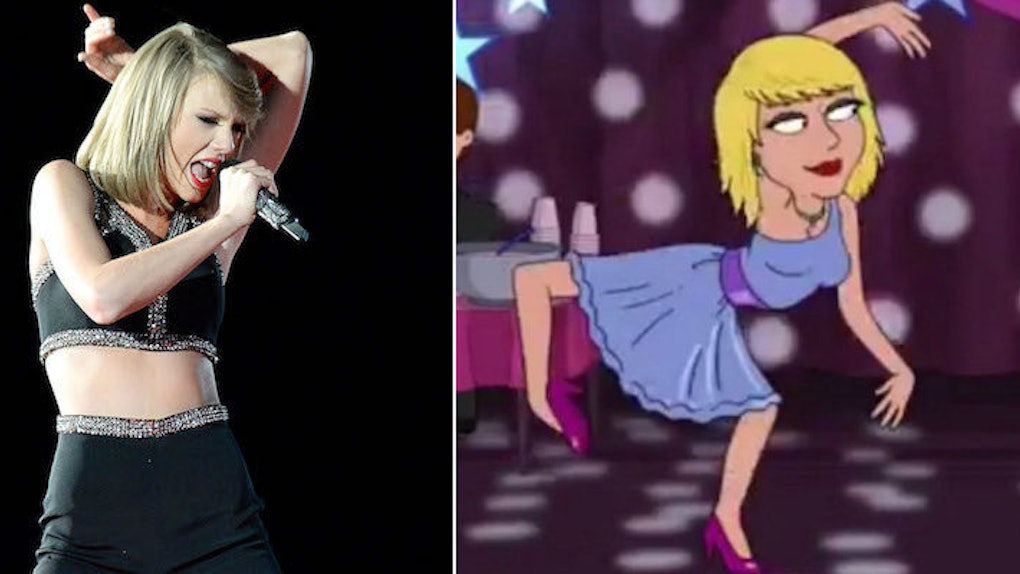 Taylor, we love you, but you should probably sing more and dance less.

Last night's episode of "Family Guy" ripped the songstress apart for her dance moves, and we can totally understand why.

She's never had an ounce of rhythm in her body, but she does always make the best of it.

Shake it off, Tay. Shake it all off.

Although I hate to admit it, I have to agree.

Apparently, during the show, Stewie is a dedicated fan of Taylor's and pressures his older brother, Chris, to ask her to homecoming.

To his surprise, the singer accepts his offer and goes to the school dance with him. However, he soon finds out Taylor definitely doesn't have the greatest moves on the dance floor.

This is how family guy has Taylor swift dancing pic.twitter.com/yQNx0aToel — ... (@keemTyrell) November 7, 2016

Not before long, Taylor does something we're all way too familiar with: She breaks up with Chris and writes a song about him. *surprise, surprise*

In the episode, her cartoon character allegedly says,

I always do this. I ruin relationships with nice guys and John Mayer just so I can write songs about heartbreak and moving on.

In Chris' case, the breakup song written was called "The Boy in the Giant Tux."

Maybe poking fun at Taylor's love life was a little bit much. She's just looking for love, leave her alone!

But, as far as her dancing goes, I can't disagree. As a Swiftie from day one, I've never looked up to her for her smooth moves.

But, if she really has a "fling" happening with Drake, maybe she should take some dancing lessons from Rihanna.