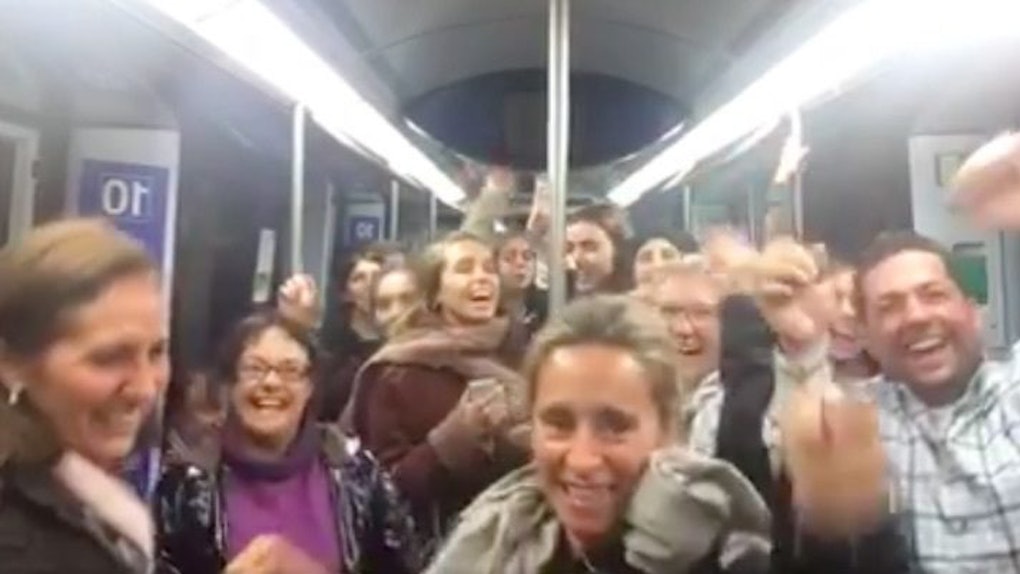 Strangers Sing And Dance To Shakira On Train

Man, did I need this video.

The clip, shared to Facebook by Shakira on Tuesday, shows a train full of passengers singing and dancing to Shakira's hit song "La Bicicleta."

Honestly, I'm jealous I wasn't there -- it looked like a ton of fun.

According to E! News, the train these music-loving passengers were aboard was in Madrid, and the dancing began when an artist on board started to sing the track.

The man, shown in a green hoodie and a white baseball cap, starts by blasting the music and singing into a microphone.

After a group of giddy girls begin singing along with him, he passes them the mic.

Not before long, more and more passengers join in on the singing, and the scene becomes movie-like.

Even when the train stops, the Shakira fans remain on board and continue to dance like no one's watching.

Toward the end of the clip, a man in a white plaid shirt positions his camera and steals the spotlight in a hilarious way.

With a huge grin on his face, he dances enthusiastically and waves to the camera with the other passengers on board.

HE LOOKS SO HAPPY. THEY LOOK SO HAPPY.

At this point, the subway is packed. Someone could've easily popped a bottle of champagne and called it a party.

In fact, the scene was so lit, Shakira shared a video posted by a fan of the dance party to her Facebook page. The fan's description said,

I was in that car, and I had a great time. I got off the train smiling.

In Shakira's post, she replied to the passenger, writing,

The passenger's words and moments like these are what make music make sense!

Maybe someone will start singing on a subway in NYC sometime soon -- I think we all need a little cheering up over here.