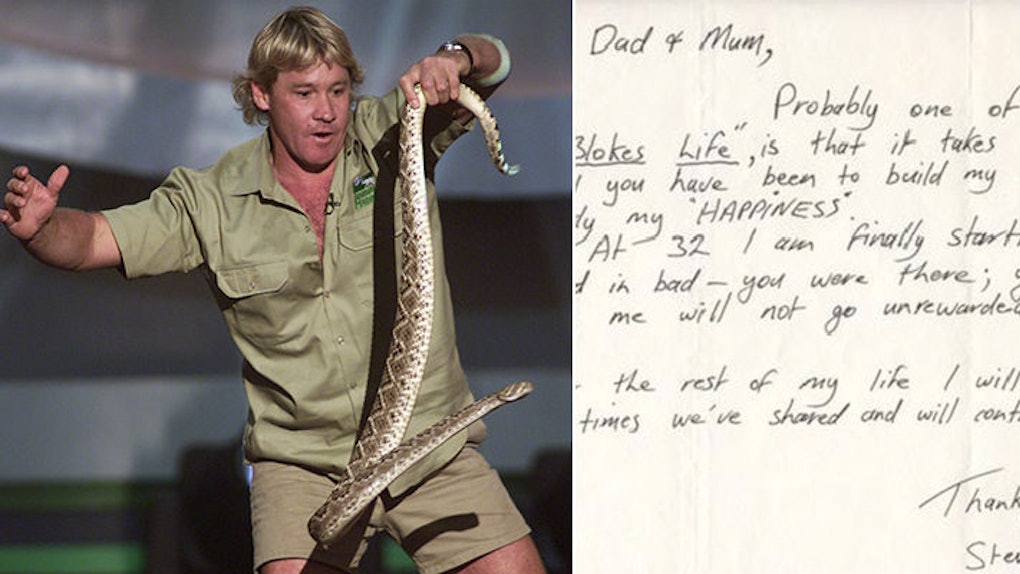 Steve Irwin's Parents Found This Heartbreaking Letter After He Died

A decade after Steve Irwin's tragic death, The Crocodile Hunter's parents have revealed a heartbreaking letter their son wrote to them before passing away.

In a note that dad Bob Irwin says he only found last year, a 32-year-old Steve wrote lovingly to his mother and father:

Probably one of the most unfortunate things in a 'Bloke's Life' is that it takes over 30 years to realise how essential you have been to build my character, my ethics and, most importantly, my HAPPINESS.

Sunday will make exactly 10 years since Steve Irwin lost his life after getting stabbed by a stingray.

The Crocodile Hunter was known for hosting a show of the same name with his wife and for his daring ability to explore animals and nature from an up-close and personal view.

The letter Bob Irwin found was written 12 years prior to his son's death, during a time in which Steve seemed to revel in the fact he was "figuring out" life.

At 32, I am finally starting to figure it out. In good times and in bad, you were there. Your strength and endurance to raise me will not go unrewarded. My love for you is my strength!

Steve's father Bob, an Australian legend for similar reasons, revealed the letter as part of the promotion for his latest book, "The Last Crocodile Hunter: A Father and Son Legacy". The memoir seems to have its fair share of tributes to Steve Irwin, who labelled his parents "best friends."

For the rest of my life I will reflect on the unbelievably GREAT times we've shared and will continue to share. You're my best friends!

Irwin was 44 years old at the time of his death.