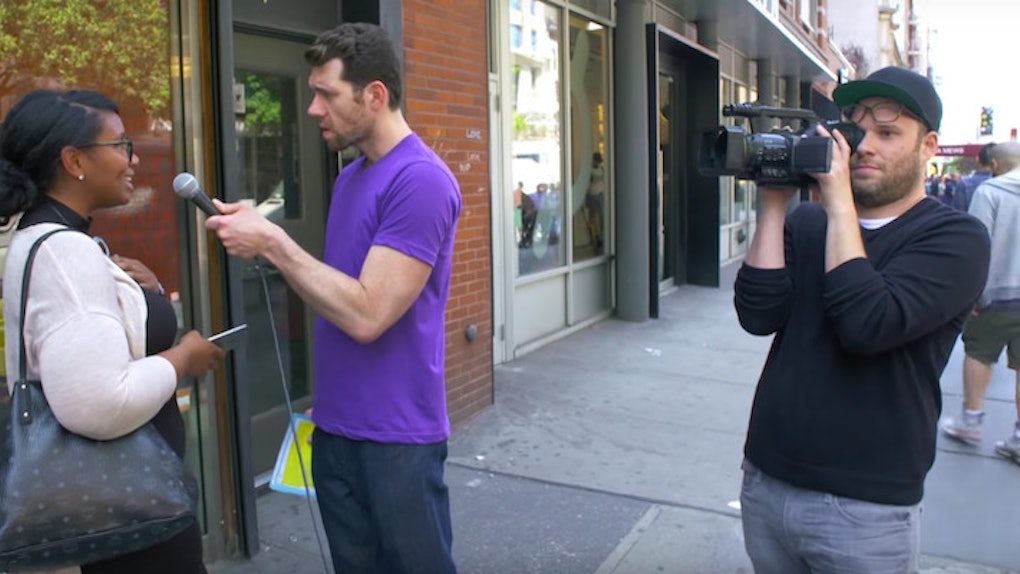 Seth Rogen teamed up with Billy Eichner, and it was absolutely brutal.

In honor of Seth Rogen's latest "Billy on The Street" appearance, Billy Eichner and his crew decided to take a break from its usual, frantic running gameshow format to prank innocent New Yorkers trying to just live their lives.

Obviously, Seth was still alive and hiding behind one of the cameras of the shoot, enabling him to surprise the contestants after they were informed he wasn't actually dead.

Billy explains in the video,

We've lost so many great artists this year who don't live long enough to see all the many profound ways that people pay tribute to them after they're gone. Seth can experience what their reaction is while he is still around.

This is pretty vicious, but most of the joke is on Seth himself.

Apparently, a lot of people in New York have no idea who Seth Rogen is. It's like the early 2000s didn't happen for a massive population chunk of this planet. My mom has seen "Super Bad," and I'm pretty sure my mom still hasn't been on YouTube.

Of the people that did know him, one of them could not have given a sweet Christmas turd if he died or not.

She says it's because she wasn't into "stoner humor," but that was only after the reveal was made, which makes me think it was something more deep-seated: a really dark, deep hatred of Seth.

The last girl was genuinely hurt to hear Seth died, which means that even in the best outcome of the game, it still requires Seth to be a dick.

Seriously though, how has everyone not seen "Pineapple Express" by now?