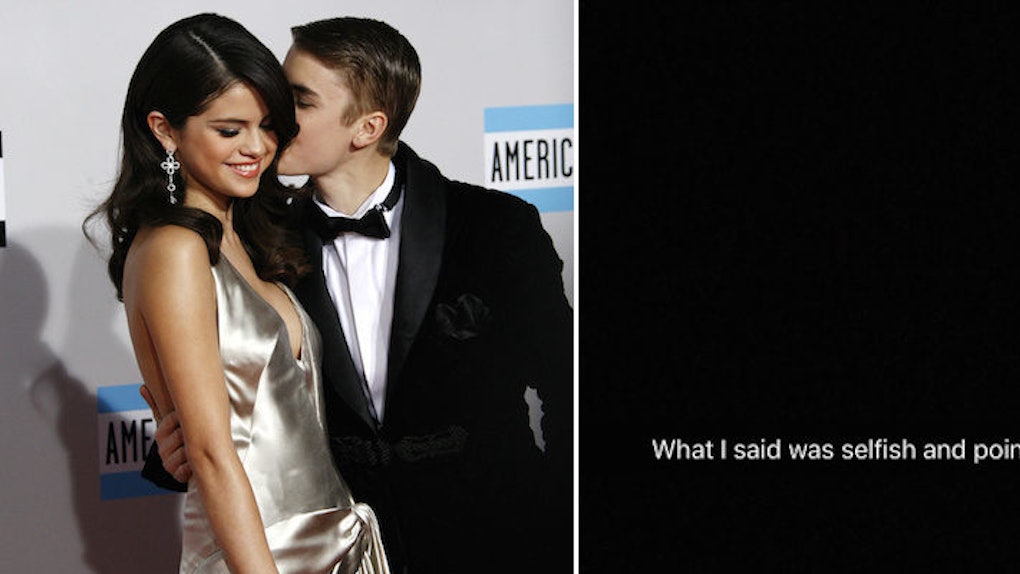 DING DING DING. The fight between Justin Bieber and Selena Gomez is over.

Gomez threw in the towel after publicly calling out her ex, resulting in him deleting his Instagram account.

The 24-year-old posted a groveling apology on Snapchat that appeared to take back everything she'd said.

What I said was selfish and pointless.

She was getting a strong backing from Beliebers, who were quickly defecting amidst the feud.

Wait, are you a bit lost? You probably need some context if you're coming into this fresh.

Basically, Bieber has deleted his Insta because people were posting too many mean comments about his girlfriend, Sofia Richie.

Just a day ago, the 22-year-old threatened to make his page private.

So instead of laying off the poor guy, Beliebers sparked a rebellion, with some apparently perceiving his message as betrayal.

The hashtag #RIPBeliebers was born, and fans were giving him sass online.

Then former flame Selena Gomez got involved by replying to his threat on Instagram.

Under a photo of Bieber and Sofia Richie, She said,

If you can't handle the hate then stop posting pictures of your girlfriend lol -- it should be special between you two only. Don't be mad at your fans. They love you.

Bieber felt like he had to respond to the public call out, so he wrote back:

But despite the apology, Gomez fans are still standing strong behind her.

#sorryselenaweloveyou don't be sorry girl! YOU DID NOTHING WRONG!! @selenagomez — mariah (@mariah_kay98) August 16, 2016

So, it might really be over. Gomez backed down and Bieber's Insta account is still deleted. No one wins.

ARE YOU HAPPY NOW??