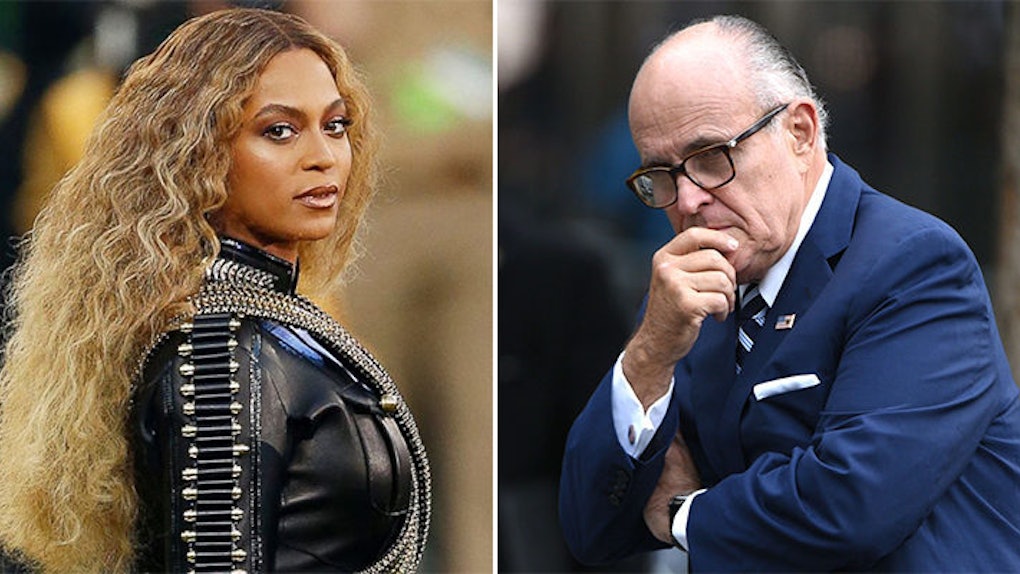 Well, apparently you can't win everyone's approval because Rudy Giuliani intensely shaded her "Lemonade" medley, calling her message that some claim to be anti-police "a shame."

You remember Rudy? You know, the former mayor of New York during 9/11 who recently claimed that there weren't any terrorist attacks before Obama?

While on "Fox & Friends," which sounds like a show on the Disney channel now that I think about it, Rudy could not contain his distaste, especially when it came to criticizing the perceived anti-police message.

The VMA moment in question, which happened during the "Pray You Catch Me" portion of the medley, had Bey's backup dancers falling down to the beat, followed by a quick transition to red lighting.

I saved more black lives than any of those people you saw on stage by reducing crime, and particularly homicide, by 75 percent -- of which maybe 4,000 or 5,000 were African American young people, who are all alive today because of the policies I put in effect that weren't in effect for 35 years.

Uh what? I sure hope you saved more lives than a few musicians because wasn't that PART OF YOUR F*CKING JOB?!

When it comes down to it, I think Rudy seriously missed the point.

I'm sorry, but you're delusional if you think the black community isn't suffering and frequently dying at the hands and guns of police officers.

It's a systemic institutional problem, and shouldn't people be creating art to express their frustration?!

Instead of potentially engaging a dialogue about how we can fix this growing and lethal issue, Rudy chose to make this about him, as if he had to say, "hey, I didn't experience this, so it must not be true."

Additionally, it's a shame that Rudy seems more upset over a musical performance than the fact that this horrible cycle of violence exists in America.